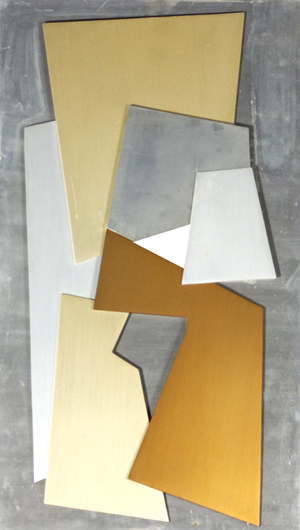 Hans Richter is best known to art history for his contributions to avant-garde cinema. “Rhythmus 21” (1921)—one of the earliest examples of abstract film—set a precedent for the application of painterly formalism to the expanding realm of cinematography. And works like “Ghosts Before Breakfast” (1927) and “Everything Turns” (1929) brought Dada’s self-conscious modernity and societal critique to a new, revolutionary medium. But Richter’s commitment to the principles of early twentieth century modernism extended beyond the celluloid reel. As the current exhibit at Maya Stendhal affirms, the filmic work of Hans Richter can only be properly appreciated as a consolidation of ideas developed in Richter’s equally remarkable career as a painter.

For a somewhat underappreciated art-historical figure, Richter held an important place in the development of numerous key movements of the twentieth century, from Der Blau Reiter expressionism and Dada to his breakthrough films and the adaptation of Constructivist principles in his later painted works. Intended to coincide with the arrival of Dada at the Museum of Modern Art, this mini-retrospective provides a welcome overview of the artist in lieu of his ancillary role in that museum’s current blockbuster exhibit.

Divided by period into Stendhal’s several galleries, Richter’s work is presented as that of an artist whose continual creative reincarnations over a sixty-year span are unified by a vision of focused singularity. What Richter seems to struggle with most ardently is the paradox of preserving expressive freedom (likened, via the thinking of artist friend Hans Arp, to the principle of “chance”) while adhering to the most scrupulous of formal codes. Despite his philosophical devotion to Dada, the whimsical irreverence typically associated with that movement—which Richter himself refers to as the “skin” rather than the “bone and flesh” of Dada’s approach—emerges in his work only occasionally, as in the heteroclite “Justicia Minor” from 1917. Richter’s surrealistic film experiments were often heavily influenced by friends such as Duchamp, Ernst, Huelsenbeck, and Schwitters, but his most personalized works appear more at home among the aesthetic ambitions of Constructivism than the socio-cultural nihilism of his Zurich and New York peers.

Foremost, it is the assiduity with which Richter applied himself to formal dilemmas—namely, the attempt to find a visual code for musicality through color association and the repetition of form—that defines him as an artist. And in light of this ambition toward a concrete representation of the rhythmic, cinema, (with its synthesis of time and space), seems a natural destination. Still, never does one expressive mode appear to take precedence over the other. As if in conscious accord with the Hegelian principle of Aufhebung, in which a previous conception is both superceded and preserved by its usurper, Richter’s oeuvre functions dialectically; the work ambulates across media, while the nomadic spirit driving it remains essentially unaltered. Thus, his portrait of Arp from 1958 appears as a constructivist collage of the original pencil drawing from 1918, and a group of serigraphs completed near the end of his life bear titles referencing both the date of their creation and the date, some fifty years prior, of their mental inception.

Richter’s debt to Arp’s creative output and philosophy is plainly apparent. Certain abstract composite works from the Stendhal exhibit, when compared with those by Arp currently on view at the Modern, are as indistinguishable from one another as the analytic cubist paintings of Picasso and Braque. As a stroll through the upstairs galleries at MoMA will affirm, the creative movements in which Richter played a part were defiantly international and, to some degree, collective in terms of their constituents’ proprietary relationship to creative/intellectual material. Because of his consistent tendency toward a derivative approach, it is easy to understand how Richter’s legacy has been eclipsed by the more monumental figures of his time. But the Stendhal exhibit is helpful in elucidating the unique character of Richter’s vision, particularly in its inclusion of several mid-period works whose authorial originality are outshone only by the abstract films Richter completed in the 1920s. “Simple Gestures Variation,” from 1959, and several related canvasses from that period achieve the universal language Richter sought throughout his career to convey through art. Carefully balanced but shot through with motion, they accord with Richter’s proposition that rhythm is “not definite, regular succession in time or space, but the unity binding all parts into a whole.” What this timely, well-conceived exhibit ultimately reveals is a most trenchant creative spirit following what he termed the “sensuous appeal of chance” to its fullest conclusion.