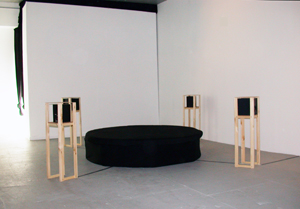 London-based artist Clare Gasson uses sound as her primary medium, but she is far from what most gallery goers would consider a “sound artist.” Even so, her first New York exhibition at Parker’s Box—with its cradles of headphones, formations of speakers, and ample darkness—serves up all the preliminary indications that might get her work falsely accused.

At the center of the darkened gallery is a large, inviting black cushion surrounded by speakers emitting a low, soothing murmur that wafts through the space more like a smell than a stream of sound. A soft female voice coaxes viewers to the oversized body pillow where they are encouraged to lie down and listen. From there a cunning narrative burrows into the margins of their consciousness and settles in like a daydream.

In the opening scene of “A Little Light Music,” the first piece in the show, the narrator describes a woman embarking on a weekend mystery vacation with the detail befitting a gothic novel. While this potential mystery unfolds, however, there are indications that the events are scripted and take place on a movie set. The woman, described as an actress, proceeds in a cab toward a Swiss chalet where she is to take part in this orchestrated event. Whether she is an actress in a movie about a fake movie mystery, an actress in a real, fake mystery, or any permutation of these real/artificial circumstances remains unclear.

Gasson frustrates any attempt by listeners to locate continuity and stability in the story. It soon meanders from the Murder-by-Death-like mystery into a kind of dry realism, and eventually yields to a hallucinatory absurdity that somehow triggers the need for a resolution that is beside the artist’s point (and yet, while writing this review, my reluctance to spoil the irrelevant ending is telling of Gasson’s guile and control.)

Gasson’s dismantling and interrogation of narrative has more in common with video artists such as Omer Fast, Candice Breitz, and most notably, Douglas Gordon, than with artists involved with the mechanics and science of sound. She admits to considering herself a “visual artist” to the degree that she can transform the details of her spoken or written episodes into mental illustrations of the events. Gasson is actually shaping a personal, visual theater that happens to use sound as a gateway.

The second piece in the show, “Relay,” develops through a chain of linked conversations not unlike Richard Linklater’s Slacker. The amorously related individuals are soberly defined by simple descriptors such as ‘nurse’ or ‘tourist.’ Gasson uses our preconceptions against us, and by the end of the chain of encounters we learn that the genders we ascribed to the characters have been misapplied and reversed throughout. The detail and finesse of her writing, along with the silky, steady voice of the narrator not only engage her listeners, but charm them to the point of dropping their critical guard and allowing themselves to be misled.

The final work, entitled “The Pitch,” is simply a printed, single-page script stacked discreetly by the exit of the gallery. It uses the same seductive language as the other two works to lure the audience into an ambiguous drama. The script describes the pitch for a film by participants in a competition, delivered in the spirit of a reality television program. As the piece progresses, the dialogue between the contestants and judges becomes entangled with the fictional plot being pitched. “The Pitch” places Gasson even more firmly into the world of theater, but its uneasy and ironic relationship between artifice and reality is more Bertolt Brecht than Off-Broadway.

Popular media has a long history of deftly manipulating both fictional and real narratives. From William Randolph Hearst and D.W. Griffith to the modern day magicians at Fox News, manipulating a story has become standard and standardized. In reaction to this, the art world has looked to radical assaults and non-narrative explorations as diverse as Virginia Wolfe’s To the Lighthouse, Brecht’s practice of “estrangement,” and last year’s Whitney biennial as tonics. Claire Gasson, however, is unwilling to completely throw the baby out with the propagandist bathwater and dismiss the prevailing value of traditional fiction. She embraces the craft and subtlety of descriptive storytelling and its power to transport and inspire, even as she works to keeps it honest and centered by calling its conventions and strategies into question.

The Propulsive Sound of Nader Khalil

Now, with a pair of self-released EPs, Nader Khalil and Nader Khalil 2, in 2022, Khalil has cultivated a sound of his own.