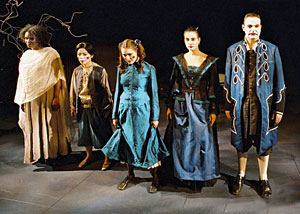 It’s not an obscure Kennedy cult; Hubbs and Chavkin are members of a theater company called the TEAM, and they’re in a basement studio near Columbia University, rehearsing their new work, Particularly in the Heartland, in preparation for Soho Think Tank’s annual Ice Factory Festival, which continues at the Ohio Theater through August 12. As Hubbs and Chavkin clarify the relationship of RFK—a major character in Heartland—to the divine, actors arrange window frames and watering cans, revise prepared text, and stretch out on the cement floor. Hubbs experiments with rain sounds; a Bible lies face-down on a table.

The TEAM’s journey to the Ice Factory began, like many, when Soho Think Tank artistic director Robert Lyons saw their work during his annual rounds, when he seeks out new artists and invites the most promising to apply. Although the Ice Factory, now in its thirteenth season, is a veteran in the crowded summer festival scene, Lyons says its artistic parameters are still wide open. “It’s less finding things that fit our agenda,” he says, “and more just finding things that we want to present and then calling that our agenda.” That agenda—including, this year, a carnival Brothers Grimm, an absurdist tale of young professionals, and Soho Think Tank’s own The Flight of Icarus—claims immense street-cred among downtown artists and audiences. This is partly because only six plays are accepted each summer, including work by such known and respected quantities as Pig Iron Theatre, Elevator Repair Service, and Les Freres Corbusier; partly because the Ice Factory allows each show an exclusive week in the theater space; and partly because that space is the Ohio Theater.

“The Ohio Theater has been my favorite theater space in New York City since I first saw a show there,” says Chavkin. “It’s wooden, it’s huge, it’s barn doors that open out, it’s a glorious space that you can actually run across.” This makes it ideal for Heartland, a Midwest meditation that originated far from Kansas while the TEAM was performing in Edinburgh last summer. Chavkin was contemplating their next project when she read about a 2005 bankruptcy law in the New York Times. “The title of this piece comes from a sentence in that article,” Chavkin explains, “which is, ‘Since President Bush signed the law into effect in April, bankruptcy filings have jumped, particularly in the heartland.’” 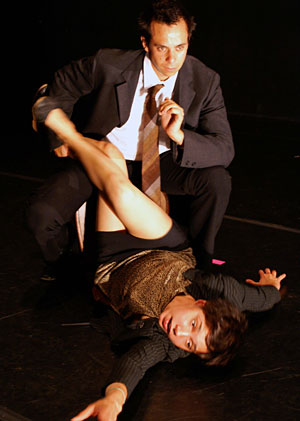 ...and your little dog too: Crashing over Kansas with the TEAM’s Particularly in the Heartland. Photo by Rachel Chavkin.

The TEAM then compiled a list of “a thousand things that belong in a piece about the Midwest, from dirt to teeth to methamphetamines,” until several themes—immigration, Christian fundamentalism, and, of course, Robert F. Kennedy—emerged. Because half of the TEAM are themselves Midwesterners, the piece is also about the “red-state/blue-state” dichotomy. But, Chavkin hastens to add, it’s neither overtly political nor an analysis of the country’s divisions. “A piece about ‘what’s wrong with Kansas’ was not interesting to us,” she says. This is clear from their eclectic rehearsal: in one scene, a pregnant teen swallows an alien; in another, the cast belts out “The Battle Hymn of the Republic”; a third sequence involves a slow dance and an e. e. cummings poem. “Are you Robert right now?” says Chavkin to actor Jake Margolin. “I thought he was God,” chorus a few actors. “He’s totally the hand of God.”

After the Ice Factory, Heartland heads to the Edinburgh Fringe Festival, but Chavkin hopes it will have a longer New York career. While such goals are common in summer festivals, the Ice Factory may be better suited than most to realizing them. Transferring, Lyons notes, is not the only benchmark of the Ice Factory’s success, but “certainly that is part of the goal of the companies when they come in, so that becomes part of our goal too.” After playing at the Ohio, Elevator Repair Service’s Room Tone—a new take on Henry James’ Turn of the Screw—toured nationally, as did Lipstick Traces, an adaptation of Greil Marcus’ Secret History of the Twentieth Century by the Foundry Theatre. Pig Iron’s Hell Meets Henry Halfway returned for a run at the Ohio, garnering a 2005 Obie award. This year, Lyons is excited about a program called Soho Think Tank Presents, in which selected pieces from the Ice Factory are invited back for a longer run. “We think of expanding it that way,” he says, “making more of a commitment to the companies that come in rather than bringing in more companies.”

South of Columbia and across the river, at the Chocolate Factory in Long Island City, members of Big Time Action Theater are setting up mats to rehearse The Jaded Assassin, their Ice Factory contribution. Big Time Action Theater, explains artistic director Tim Haskell, is a new name he has given to work he has been doing for years: literally, “action theater,” which “means not just fight sequences but stunts and highly visual elements—things that are kinetic and explosive.”

The Jaded Assassin promises to be all of those. Haskell commissioned playwright Michael Voyer to write a play about an ancient land that is cursed, and a warrior who can eliminate the curse but in doing so must eradicate everything in her path. “I had an exact idea of what I wanted to direct,” explains Haskell. That vision transformed itself into a martial arts-based performance with battles enacted onstage. “We’re stylistically staging it like it was an anime film,” explains Haskell. “It’s not something that comes naturally to the stage, but it looks pretty cool.”

As actors trickle in, fight, director Rod Kinter unpacks swords and runs through fight sequences. Haskell, too, was drawn to the Ice Factory partially because of the excitement of doing his highly physical work at the Ohio, and also hopes that the Ice Factory will be only the beginning of The Jaded Assassin’s New York career. “It’s got a real nurturing quality,” he says of the festival. “But the main selling point is that the Ohio Theater is an incredible space.”

What makes the Ohio so appealing? Perhaps its spatial flexibility, or the former textile factory’s height and breadth. Perhaps it’s the barn doors opening directly to the street. “There is something about it,” says Lyons, “that is very dramatic, inherently—whatever the proportions are, they just got it right. And so it takes very little to create a theatrical image in the space. If you just put a person on stage and hit them with one light, it’s theatrical.”

“The Ohio is one of the few downtown theater venues that has a lot of depth,” adds Rachel Dickstein, artistic director of Ripe Time, a dance-theater company presenting a workshop of its new piece, Betrothed, in the Ice Factory. Dickstein is returning to the Ohio after presenting her last work, Innocents, there last year, and as a company that, Dickstein says, “bridges the gap between dance and theater,” the Ohio’s open space is invaluable.

Betrothed originated from Dickstein’s interest in the marriage ceremony as it spans cultures. “Just about the only thing left in our culture that has that kind of frame around it is a marriage,” she explains. From this seed grew Betrothed, a triptych of short stories adapted for dance-theater: a piece from Jhumpa Lahiri’s Interpreter of Maladies, a Chekhov story called “Betrothed,” and S. Ansky’s The Dybbuk. The Ohio’s stage figures prominently in tying them together: “We’ve talked about thinking about the stage,” Dickstein says, “as being kind of like the skin of a woman’s body—in the same way that in an Indian wedding a woman would have herself hennaed. We’re literalizing that, painting the floor and walks with a serpent-like pattern.”

Dickstein’s devotion to heightened, physical theater, and her love for the Ohio, are nearly all she shares with the other artists in this summer’s Ice Factory. And for Soho Think Tank, that’s the point. Sitting in the cluttered back office at the Ohio, Lyons muses on the diverse lineup of the 2006 Ice Factory. “In a way you don’t know until you get the flier back,” he says, turning over the dark red brochure. “It’s like there’s a psychological moment when this comes back from the printer. Every year I go, wow—I want to see these shows. So as long as that happens, we’re in pretty good shape.”

Torkwase Dyson speaks with Robert R. Shane about her relationship to distance, environmental sustainability, and how Black American history influences her artwork.

Robert C Morgan poses questions to Richard Long on the occasion of Richard's two exhibitions, MUD HEAVEN, and FROM A ROLLING STONE TO NOW.

An examination into how Robert Duncan and Jess transformed the benignly bourgeois domestic space into a political one, making this newly imagined domesticity the grounds for the work of artistic creation.