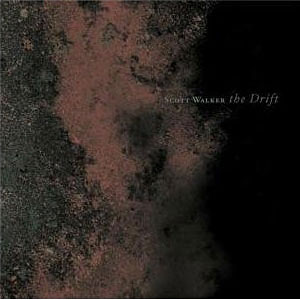 Scott Walker’s forty-year evolution from a Swinging London pop singer to the somber genius behind the feel-bad record of the summer is as thoroughgoing, and as startling, as any in modern music history. Following his latest ten-year hiatus from recording, the American expat has released a record so fundamentally different from his chart-topping orchestral pop hits that the only clue to his true identity is the distinct baritone voice that has changed little since 1965. The Drift, an album that plumbs the depths of Walker’s unique and tormented vision, is a work of haunted beauty, the soundtrack to the global nightmare that we find ourselves in the midst of in 2006. When, in “The Escape,” he sings “...world’s about to end,” it’s hard to argue. Haunted by clangs, pounding doors, children’s screams, and the sound of “man descending stairs,” this album will either captivate you or make you run and hide.

The Drift pushes off on a moody note with the opening track, “Cossacks Are.” High-pitched synth and throbbing bass meld with repetitive guitar chords that are quickly boosted by a tribal drumbeat; it feels like we’re cleared for lift-off. The voice we haven’t heard since 1995’s Tilt rises up to intone, “A moving aria—for a vanishing style of mind.” “Cossacks” is an up-tempo rocker in bloom long enough for you to tap your feet before the bottom drops out and we’re left with only a heartbeat kick-drum and that voice again, singing “with an arm across the torso/face on the pale monkey nails.” While that lyrical phrase begins to sink in, the guitar strums back into the mix and the song resumes its harried pace.

The record—influenced by Walker’s presumably harrowing experience watching 9/11 happen in his native country—continues with loads of awkward time-changes and unsettling layers of sound that drift across the landscape like fog or worms on the march. Walker uses a wide range of instruments to conjure up a creepy feeling throughout. There always seems to be something swarming around the corner or rumbling up from the sewer (including something resembling a satanically possessed mallard, like an evil Donald Duck), leaving you with the same sense of dread that he must have felt while recording it. The gradual unfurling of these songs and their painfully pregnant silences shattered by abrupt explosions of chaos give the whole affair a grandiose sense of dark pageantry.

The lyrics on The Drift are evocative and brash, yet deeply poetic. Brian Eno, in the forthcoming Walker documentary 30th Century Man, says of Walker’s songwriting: “He really should be recognized as one of our great composers, but a great poet as well. His lyrics are absolutely peerless. I’m sure people like Beckett thought about words in the same way.”

There was a time when Scott Walker lived in fear of being overwhelmed by the hype of chart-topping pop success in England. His poster hung on the walls of British teens, somewhere to the left of the Fab Four’s. Few fans could have imagined the long, dark road that his sound would end up traveling down over the next four decades. Certainly fans of Take It Easy with the Walker Brothers would be mystified to learn that the current record lists “meat punching” as an instrument—a far cry indeed from “When Joanna Loved Me.”

In the sixties, the Walker Brothers were big in the world of MOR radio, Walker’s full-throated croon over the sounds of orchestral pop music being just the thing for people who had outgrown the Lawrence Welk set but weren’t quite ready for rock ‘n’ roll. The attention made Walker squirm, though, and over time he found himself drawn to a much heavier sound, dragging his pop career into the deep. At one point somebody drew Walker’s attention to the English translations of the songs of Belgian composer Jacques Brel, and he became obsessed with them. After disbanding the Walker Brothers (none of whom were brothers, incidentally, or even named Walker), he released the first of his four “Scott” solo albums in 1967. In addition to his own wistfully romantic songs, he included three songs by Brel and one by Kurt Weill. Walker having been a reliable pop professional over the years, his record label and some of his audience found themselves perplexed by his choice of Brel’s lurid “My Death,” instead of one of his melancholy love songs, to promote his new record on a well-known British television program. He had fired the first shot in his battle to deconstruct his career, his sound, and his life. His thirst for Brel’s chansons resulted in many more covers and even an entire album of them, Scott Walker Sings Jacques Brel.

Walker became famously reclusive in the 1970s, and after the fourth of his “Scott” albums failed to generate the kind of sales his previous albums had enjoyed he began to record on an increasingly erratic schedule, eventually ducking out of the public eye completely and releasing records once per decade. He turned down an offer to collaborate with Eno and David Bowie in 1975 because he needed to control his sound and vision completely. His music became less and less melodic and hummable and more and more abstract and bleak.

Now, four decades after the release of Scott 1, he has delivered his sinister masterwork. The Drift is laden with violence and isolation—an expat’s searing gaze across the ocean to his native America at what he sees as not merely troubling but grotesque. While several tracks feature orchestral arrangements, the most important element to this hellish musical travelogue is the authoritative vocals. Walker’s voice hasn’t changed very much in the last forty years, perhaps due to his ten-year breaks between recording sessions and total lack of tour dates. It has deepened a bit, though, and is now more wrought with fatalism and gothic resonance.

In a recent and very rare interview with the British music magazine MOJO, Walker says that the notion of him as a recluse is somewhat exaggerated. He has been involved in projects ranging from producing other artists’ work (like Pulp’s 2001 We Love Life) to curating the Meltdown Festival in London in 2000, which featured the likes of Radiohead, about whom, he claims “I’m glad I’m around while Radiohead are having a career, ‘cos they’re fabulous. If I could have it all again and be in a band, that’s the kind of band I’d like to have been in.”

While he manages to keep up with the types of contemporary musicians that defy classification, he continues to create a personal sound that refuses to play to industry expectations—if the business even has any left for him at this juncture. In fact, when you load The Drift into iTunes, the Category is given as “Unclassifiable.”

McCorkle’s camera moves are minimal. She allows her images to linger on screen. Things feel informal and sincere, allowing the viewer to settle in and listen.

Prelude to a Hot American Summer

In the unfolding of social antagonism which drives human history there are spectacular moments when a hitherto-invisible threshold is crossed and great masses who have long appeared to suffer in silence thrust themselves onto center stage to claim their place as breakers of chains and makers of history. The 2010 self-immolation of Tunisian street vendor Tarek el-Tayeb Mohamed Bouazizi was one such event. The 2016 plan to construct the Dakota Access Pipeline across sacred indigenous land and water was another.