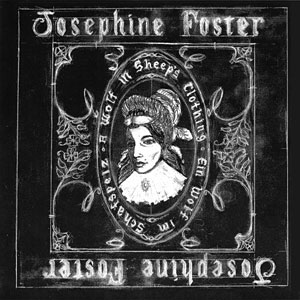 All I knew about Josephine Foster before hearing her latest album was that she was considered part of the neo-hippy “freak folk” scene, along with people like Devendra Banhart. For me, that was reason enough to dismiss her out of hand—not because I don’t like the psychedelic folk of the sixties and seventies that supplies the freak folksters’ template, but, rather, because I like the original so much. Wholesale appropriation may be everywhere in music these days—bands are awarded points for ripping off the right people—but for me musical simulacra inevitably feel hollow and fake. And there’s something regressive and depressing about being so fixated on the past—along with more than a streak of mannered play-acting. If I didn’t like Sha Na Na in the seventies (yes, I’m old enough to remember them), if I find it hard to take Elvis impersonators seriously, why should I enjoy someone pretending they’re the avatar of Marc Bolan?

And yet I was wrong about Josephine Foster. Before getting to that, though, let me say that I was also partly right: Her previous album, Hazel Eyes, I Will Lead You (which I listened to retroactively), is pretty much what I would have guessed it would be—with one significant exception. That album, released last year, and consisting of Foster’s original compositions, is a hodgepodge of partially digested influences from the usual folk-psych suspects—Tyrannosaurus Rex, the Incredible String Band, Shirley Collins—seasoned with a streak of somewhat bloodless experimentalism. What makes the album much better than other similar recent efforts I’ve heard, though, is her voice. I’m not referring to any technical aspect of her singing; rather, what struck me was that her voice was “real,” not contrived and self-conscious like, say, the singing of Joanna Newsom (another “freak folkster” with whom she’s been associated). Despite her use of a put-on, vaguely British accent, this was the voice of a person who wasn’t play-acting, who was expressing real feelings and thoughts. The material, though, wasn’t up to the potential her singing suggested.

With her new release, A Wolf in Sheep’s Clothing, Foster has evolved significantly—not by doing a “better” job of channeling hippy folksters of the past, but by doing something new, something more personal. Paradoxically, she has achieved originality through releasing an album of “covers”: The album consists of Foster’s versions of nineteenth-century Romantic lieder, including Schubert’s An die Musik and Der König in Thule, Schumann’s Nähe des Geliebten, Brahms’s Wehmut, and Hugo Wolf’s Verschwiegene Liebe. On the face of it, this is quite an improbable project, as nothing could be further from the hippy aesthetic than nineteenth-century German (and Austrian) “art songs.” For Foster, though, this is a case of bringing longtime influences to the fore. As a child she played classical music on the piano, and was strongly drawn to a “popular” arrangement of Wolf’s Verschwiegene Liebe, which she found on an LP recorded by Barbra Streisand (of all people!). After college, Foster briefly studied opera, and indeed her voice retains a hint of a classical sound in its assurance and purity.

The title of Foster’s new CD might be seen as a suggestion that beneath a surface of “proper” classical art songs something heavier lurks (i.e., “wolfish” rock)—but I take it rather as a declaration that the lieder (punningly referred to by a conflation of “wolf” and Wolf) have been draped in the sheepskin jackets of freak folk. Indeed, Foster’s aim is not to make a show of subverting the art song, of thumbing her nose at its proprieties. Rather, through artfully ramshackle arrangements and a loose approach to the original melodies that nonetheless preserves essential shapes, Foster gently reimagines the lieder, freeing them from the hothouse atmosphere of stultifying “high art” tradition. Her vocals are stately and measured—a quality underlined by the clipped, lute-like sound of her acoustic guitar—while the periodic interjections of dissonant electric guitar (principally courtesy of Brian Goodman) do not so much disrupt as supply another perspective.

In addition to refracting Romantic lieder through a psych-folk lens, A Wolf in Sheep’s Clothing mixes in elements of noise music. Dissonant textures and bursts of clangorous electric guitar are effectively integrated into the song’s atmospheric presentation, though the version of Schumann’s Auf einer Burg, the album’s longest track and also the track that bears the least relation to its source, is not entirely successful. For much of the song, the vocals serve almost as a bed over which a trio of electric guitarists (Brian Goodman, Plastic C., and Foster herself) alternately create washes of brooding sound and thrash spastically. The problem here is that as far as improvised noise music goes, this is nothing particularly inspired. That one quibble aside, with A Wolf in Sheep’s Clothing, Foster has transcended the limitations of freak folk to produce a mature and personal work.

Josephine Halvorson: On the Ground

A hasty visitor to Sikkema Jenkins might easily overlook Josephine Halvorson’s 11 gouaches, tucked away in the back gallery. That sin of omission would be unforgivable and a source of eternal regret, because these outstanding paintings take landscape painting as a genre in a new direction, focusing on the insignificant rather than the infinite.

The following scene transpired in a brilliantly lit salon draped entirely in red. Rodolphe, dressed in a long dressing gown of black velvet, which further augmented his paleness, was seated before a large table covered with a rug.