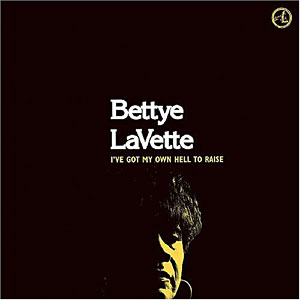 I’m the kind of person Bettye LaVette probably hates: another come-lately fan, brought around to her incredible voice and eclectic repertoire by last year’s I’ve Got My Own Hell to Raise (Anti-, 2005). I say this because at her recent concert at Paris’s Le Cigale music hall, LaVette introduced her 1962 song “You’ll Never Change” by saying, “This was my second recording, and it did not sell one copy. Not one. Don’t know why you all didn’t buy it.” The way she said it was heartbreaking, as was the impossible wish to go back in time to remedy the situation. Yet we were all implicated, even though most of us in that old Montmartre music hall were infants, or not even born yet, when “You’ll Never Change” came out. But that was the emotional underpinning of the whole show: a woman who had finally achieved a level of success that her immense talent should’ve guaranteed, expressing a bittersweet victory in the presence of rapt, adoring—but, sadly, late-to-the-party—fans. At the end of that concert LaVette was in tears and so was I.

If you’re not aware of her yet (though her comeback, begun in 2003 and now in full effect, is quite storied), imagine a voice somewhere between—and I have a feeling she may hate this comparison, too—Mavis Staples, Edith Piaf, and Marianne Faithfull, raw with emotion, withholding nothing. And now imagine that voice singing Neil Young’s “Heart of Gold,” Kenny Rogers and the First Edition’s “What Condition My Condition Was In,” and Free’s “The Stealer.” Her choice of material may be why she escaped attention all those years: How to market someone so eclectic, so hybrid (read: ahead of her time)? From 1962 to 1997 she recorded a string of singles with various labels (Atlantic and its subsidiary Atco; Calla; Motown; Epic; and Kenny Rogers brother’s Silver Fox Records, to name a few), nine of them unreleased, only six of them making it to the R&B charts. Her 1972 album for Atlantic, Child of the Seventies, was mysteriously shelved for thirty years, until the French soul amant Gilles Petard re-released it as Souvenirs in 2000 on his own label, Art and Soul. Petard was just what LaVette needed: a visionary producer who understood and respected her own visionary choices. Soon she was performing all over Europe to deeply appreciative audiences, like the one at Le Cigale on May 12.

It was not the kind of show we’re used to here. For one thing, it started exactly on time, and for another no one in the predominantly French audience spoke at all between songs. The quiet moments were intensely silent: everyone hanging on her every note, barely breathing, their faces turned to her. Lavette introduced the Lucinda Williams song “Joy” (from I’ve Got My Own Hell to Raise) by saying, “While the rumors of my demise are greatly circulated, I’ve got a new CD.” The lyrics, as LaVette refashioned them, reflect her career struggle:

Joy, oh my joy
I don’t like it no more ‘cause they took my joy

Don’t like it no more ‘cause they took my joy

They took my joy, I want it back

They took my joy, I want it back

I started in Detroit, I was looking for my joy

Maybe in the Apple I could find joy

Her voice is painfully raw on the album cut, but in concert it took on a sublime aspect, a clarity and intensity of tone that the recording somehow doesn’t capture. Perhaps seeing her added some extra elements to my paltry store of information: She’s tiny and elegant, her movements as precise and supple as those of a temple dancer. At one point she said she was going to sit down because she was having a “senior citizen moment” (she’s sixty years old)—but then she crossed one leg over the other and descended with one fluid motion into a half-lotus on the edge of the stage. Sitting cross-legged, reaching out to the audience, she sang John Prine and Steve Goodman’s “Souvenirs,” which seemed infused with the bittersweet acceptance of struggle and its lessons:

I hate graveyards and old pawn shops,
For they always bring me tears.

Memories, they can’t be boughten,

They can’t be won at carnivals for free.

Well it took me years to get those souvenirs

And I don’t know how they slipped away from me…

Throughout the course of the show she dipped into all aspects of her career: “Let Me Down Easy,” her signature song from 1965 (“This song has taken me all over the world…”); “My Man—He’s a Lovin’ Man,” her first single, recorded for Atlantic when she was sixteen years old; and “Close As I’ll Get to Heaven,” from her 2003 album A Woman Like Me. During that song I couldn’t help thinking, she is close to heaven right here in Montmartre, the highest point in Paris, a packed house lovingly following her every nuance. And because I myself was in Paris to enjoy my own small measure of late-arriving success, I was cognizant of the delicate balance of triumph and failure, and what events and decisions place an artist on that edge. Is it just luck? “I don’t want you all to think I’m some kind of hipster,” LaVette said midway through the show, “‘cause I’m only wearing one earring. But I lost the back of it right before I was about to come on. And I decided to wear the one because two people sitting in the front row gave them to me.” Another time, her microphone suddenly switched off while she was singing. But she kept singing until it came back on. Who said success is a journey not a destination?

Her last number was Sinead O’Connor’s “I Do Not Want What I Have Not Got” (the first track from I’ve Got My Own Hell To Raise), which she sang alone on stage, a capella:

So I’m walking through this desert
And I’m not scared, though it is so hot

I have everything that I’ve ever requested

And I do not want what I have not got

The last word she uttered was “got,” and she sang it with tears in her eyes. She enunciated every single letter of that tiny word. Then she put down her microphone and walked off, while the audience cheered and then stamped their feet and chanted her name. The spotlight remained on her microphone, but she never came out again. I imagined her backstage, taking off her other earring, listening to her name chanted over and over.

Pablo Bronstein: Hell in its Heyday

Architectural fantasias run deeply through Pablo Bronstein’s veins. At the age of 16, the Argentinian-British (or British-Latinx) artist redecorated his bedroom in drabby Neasden, a West London suburb, transforming it into an iridescent Baroque palazzo.