Heart-broken so, that molehills seem high mountains,
And fill the vales with cries instead of music.

The plants grew a hutch around the raccoons and the children grew a city around the hutch.
—Joshua Marie Wilkinson

We are standing on the rooftops
We are circling like sparrows 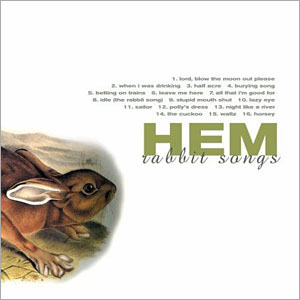 In December of 2004, my husband and I moved into a four-story, pre-war walk-up with unpolished wood stairs and aluminum-tiled ceilings on a two-block street in Greenpoint. We’d recently relocated to the city after getting married beneath a large oak tree dangling with glass lanterns in the Arkansas Ozarks, the setting where I first encountered the Brooklyn band Hem.

Although their first album, Rabbit Songs, unaided by computer mixing or digital editing, carries the lonesome beauty of a one-room schoolhouse consumed by moonflower vines somewhere just around a steep bend on Scenic Highway 71, their music didn’t quite fit into the rural setting of old hills and rusted barns. They weren’t trying to emulate the old folk, country, and bluegrass of Ralph Stanley, the Carter Family, or Dock Boggs, or neo-traditionalists like Gillian Welch and Allison Krauss. And they definitely didn’t fit within the alt-country strain filled by Lucinda Williams, Uncle Tupelo, and Whiskeytown. I couldn’t figure out what they were doing.

And then we moved to Brooklyn, where I first heard their second full-length album Eveningland, a record of factories, corner bars, rooftops, and late-night walks on sidewalks named for presidents. That’s when I began to understand their unique sensibility: the Brooklyn Pastoral.

The pastoral theme in poetry dates back to the Greek Theocritus in his work Bucolics. and is probably most familiar to us from the English poetry of Sir Philip Sydney, John Milton, and William Wordsworth. The Cambridge History of English and American Literature states that qualities of such poetry include “longing for the country as opposed to town” and “taking refuge in Arcadia.” Shepherds, hills, and the idealized countryside are the traditional subjects. Brooklyn, a sprawling mess of streets, apartments, shops, and industrial parks, contains an urban pastoral. There is more concrete and brick here than pasture and sky; the fields are vacant lots, burned out factories, and rooftop views. All those abandoned factories, victims of the triumph of the service sector economy, create industrial ghost towns—and provide the inspiration for Hem’s music.

Hem’s lyrics often evoke water, in the form of rain, the sea, wells, fountains, and sailors, as well as birds—most certainly pastoral subject material. In one instance, on “Strays,” shepherds are even mentioned. The band’s instrumentation, which includes piano, glockenspiel, celeste, guitar, mandolin, banjo, upright bass, drums, pedal steel guitar, violin and at times a full orchestra, further enhances their songs’ pastoral quality. Lead singer Sally Ellyson used a tape of lullabies she’d recorded for a friend’s child to audition for the band. Her voice is smooth, resonant, and haunting—she sings every song as though she’s trying to lull a baby to sleep. Dan Messé, Hem’s main songwriter/composer, writes tunes that deftly acknowledge the bluegrass, country, and folk traditions. He then adds sleek polish, in the form of a modern tremolo, to distinguish them from the more rough-edged songs that influenced him.

Hem’s pastoral impulse is most easily recognized when they cover songs like “Jackson” and “So. Central Rain.” Hem’s version of “Jackson,” unlike Johnny Cash’s famous rendition, is decidedly low-tempo and woozy. In “So. Central Rain” (from their latest release of B-sides, live recordings, and rarities entitled No Word From Tom), pedal steel and twinkly piano decorate Ellyson’s molasses rendition of Michael Stipe’s anthem chorus.

At a Southpaw show Ellyson once exclaimed, “How great is Brooklyn!” In an encore they performed “Pacific Street,” a eulogy for the Brooklyn street, and perhaps the most fitting song for illustrating the Brooklyn Pastoral. Ellyson introduced it by saying, “This is a song about the streets of Brooklyn.”

See where we stood
There are oceans in our neighborhood

And for leaving things they’re just as good

Well I don’t know you except for the way

A traveler knows a traveler

The way a station can tempt you to stay

And spend some time inside it

Stay where we are

We’ll wash up at the corner bar

Because leaving things is just too hard for me

Stay where we are

Washed up in some corner bar

But I swear I’ve never been so far before…

In Brooklyn I fill up on more corn bread, collard greens, and biscuits than I ever did in Arkansas. Swallows, rabbits, and sheep turn into pigeons, rats, and stray dogs. The hollow factories are the abandoned farmhouses, and the brownstone rooftop is the mountain peak. And perhaps this pastoral extends beyond Brooklyn and into urban America as a whole. In contemporary poetry the pastoral is making a comeback—a post-industrial pastoral, a generational yearning for the innocent, an innocence we know doesn’t exist.

On May 2, 2006, the sound of helicopters woke me up. When I walked up the steps of the Pulaski Bridge I saw the largest plume of dark smoke I’d ever witnessed. There were visible flames shooting out of a building fifteen blocks away. By nightfall the Greenpoint Terminal Market, a historic factory complex established in 1890 and once the second largest industrial employer in Brooklyn, was a huge pile of burning ash, consumed by the second-largest fire the city had seen in a decade. (9/11 was the first.)

An artist who grew up not far from Disneyland moves from Southern California to New York where he finds a cheap apartment in Greenpoint and a job at a framing shop. It’s the mid-1980s and the city seems like a rough place filled with a lot of obnoxious people. He wonders whether the problem is that New Yorkers never get to see the night sky.