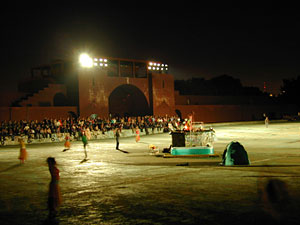 It’s a steaming hot afternoon in mid-June. At a drinking fountain near the dried-out basin of McCarren Pool in Greenpoint, a dozen kids fight over a narrow jet of water. Jessica Jimenez, an 11-year-old with an exhilarating smile and braces, doesn’t take part in the wet tussle. She sits with her sisters, cousin, and grandparents in the park and marvels at the empty pool.

“It could be soooo many things,” she tells me. And as if her abundance of ideas couldn’t be expressed sitting down, she gets up and starts to fidget. “Don’t say anything bad about the pool,” her grandfather warns her in Spanish. “No, no, abuelo,” she says, wrinkling her nose before she turns to me.

“First I want the graffiti to be cleaned up. It looks ugly,” she says. “I want different pools for small kids and big kids and for adults. And I want people to sell stuff, like bathing suits.” Her cousin joins in, “Yeah, and they should paint fishes on the wall,” she says.

The pool is a hotly debated subject between Community Board 1, the New York City Department of Parks and Recreation, and a variety of community organizations. With the exception of a pool performance series, Agora, last fall, the pool has sat dry and idle for the last 23 years. Deep disagreement over the potential use of the space and financial difficulties have hindered action.

But things are about to change drastically—and certainly not to everyone’s liking. The Parks Department and CB1 invited Live Nation, a recent spin-off of the right-wing Clear Channel Communications, to do a series of concerts in the pool beginning July 29th. The decision to invite an outsider whose motives have little to do with the community was made without input from local residents.

Community activists have responded to the take-over as another frustrating chapter in the aggressive re-zoning of Greenpoint and Williamsburg. Outside developers have already been busy changing the social make-up of the area with high-rise condos out of the economic reach of the long-time residents.

The Williamsburg community isn’t lacking in ideas for the pool’s future. Leah Kreger, a local architect and board member of the Independent Friends of McCarren Park, Inc., created a design that echoes many of Jessica Jimenez’s wishes: a series of pools that maintain the original shape and a retractable roof—a multi-functional and transformable public space that could be used as a pool by day and a performance space by night.

“The pool’s got to be a lot of different things,” Kreger says.

Kreger and The Independent Friends want a self-sustaining, year-round complex dedicated to recreation and the arts. Their design incorporates the original bathhouses built in 1936 and the characteristic entrance arch.

Arthur Steier, president of The Independent Friends, has lived in Greenpoint for the last 40 years. Steier, a sanguine elderly man, gnashes his teeth about a press statement recently issued by the Community Board announcing that it intends to demolish the current pool and replace it with an Olympic size swimming pool. “The Community board bamboozles the residents of Greenpoint with words,” he says, “‘Olympic size’ makes it sound huge, when it is really only one fourth the size of the basin now.”

The typewritten papers and yellowed newspaper clips Steier carries with him look like they have passed through many hands. His list of supporters includes nearly 150 celebrities and politicians, among them U.S. senator Charles Schumer, director Spike Lee, and Brooklyn Borough President Marty Markowitz. Asked how he got in touch with the pool’s aspiring architect, Leah Kreger, Steier simply announces: “I looked her up in the phonebook. Under Brooklyn architects.”

Steier is as pragmatic as he is a dreamer. “I wish I could win the lottery, so I could restore the pool,” he says. According to estimates of the Parks Department, a full restoration would cost $40 million. Hence Steier only plays when the jackpot hits $50 million and more.

But Steier has not won the lottery yet, and this is where Live Nation, a large entertainment promoter with strong ties to the media monopolizer Clear Channel, comes in. After a failed attempt by the Parks Department to get the Olympics Committee to fund construction of a training pool last year, Live Nation paid a $200,000 pool clean-up fee in 2005 and a $11,700 site fee in 2006, in exchange for the opportunity to use the pool for a series of seven concerts this summer.

Councilman David Yassky, who helped secure the funds for the concerts, said through his spokesperson Evan Thies that the concert will attract the “attention” the community needs. Brooklyn Parks Commissioner Julius Spiegel agrees. “Any community benefits from concerts,” he says. “It’s a nice thing for individuals and families to enjoy.” Spiegel concedes that not everybody is happy with the concerts, but tries to brush off any possible qualms. “There are always a few people who grumble,” he says. “We discussed it with the Community Board and we both agreed that the concerts would be a great idea.”

One of the many neighbors grumbling is NoÃ©mie Lafrance, the artistic director of sens production, a non-profit dance company in Williamsburg that made headlines with the performance Agora at the McCarren Pool in fall 2005.

On the phone Lafrance’s voice sounds timid at first, but her determination quickly becomes apparent. When Lafrance approached the Parks Department in 2004 with the idea for the pool performance series, the Department was not interested. “But I called them almost everyday,” Lafrance says in her soft French-Canadian accent, “until they finally agreed.” Her group paid $50,000 for pool clean-up, installment of banisters, and the restoration of the McCarren Pool arch. “The Parks Department took Sens production doing something as an opportunity to invite other people,” she says. “There was always a ton of interest, but before us no one actually took action.”

Sens production will be back this fall with Agora II, a collaboration of 20 local dance, skateboarding, and theatre groups. Community residents are invited to participate in the choreography in special performance workshops on July 15 and 22. In exchange for the community’s input, sens production is giving out free tickets.

“I want to bring the public space back to the public,” Lafrance says, “and Agora II speaks of that. It expresses this exchange of ideas.” The future of such exchanges is uncertain due to Live Nation. Initially the Parks Department proposed a long-term use of the site to sens production, but now that Live Nation/Clear Channel is part of the negotiations, the commitment has changed. “We got spun around,” Lafrance says, mildly agitated. “Clear Channel is stepping on our toes. They are having a show on one of our Saturdays so we have to change our schedule, not they. The Parks Department is selling our parks as real estate to corporate America.”

Lafrance is certainly not alone in her resentment. At a Community Board meeting in April, Live Nation submitted a fait accompli that left Katie Naplatarski, a founding member of the local children’s advocacy group Park Moms, concerned about the noise that the concerts will cause and the traffic 6,000 expected visitors will bring. Naplatarski also laments the lack of community input in the decision-making process. “I’m concerned about a private corporation making use of public space without input from the community, without the community even knowing,” she says.

Beka Economopoulos from The Change You Want to See Gallery, who organized the theatrical protests against the Williamsburg re-zoning in April 2005, is now taking on the fight against Live Nation/Clear Channel. She calls her new creative intervention campaign Pool Aid. Together with the Greenpoint Waterfront Association for Parks and Planning (GWAPP), sens production, Neighbors Against Garbage(NAG), the Open Space Alliance, and Park Moms, Economopoulos intends to wake up and motivate Williamsburg’s hipsters as much as long-time residents.

“Why not fight back with our unique community, our own culture?” Economopoulos asks as she prepares her “mediagenic and fun event with music, street art, and performances.”

Green spaces all over the city suffer from a lack of public funding, according to the NYC Park Advocates, a non-profit watchdog group dedicated to restoring, preserving, and expanding the city’s public parks. The Parks Department receives less than half of one percent of the city’s annual budget, compared to 1.4% before 1960 (and in contrast to the generous 5.5% that Chicago allots to its public green spaces today). As a result, communities—and the Park Department—are forced to rely on private funds.

Many New Yorkers perceive the trespass of the private sector in the city’s public space as a threat. A troubling example is the recent controversy surrounding Central Park’s Great Lawn. In 2003, the Lawn became the site of a Dave Matthews Band concert sponsored by AOL to promote its broadband service. Less than one year later, the Bloomberg administration refused to allow public protests on the Great Lawn during the Republican National Convention, claiming that the crowds would damage the grass.

At McCarren Pool, the strings are plain to see. Never mind whether families and kids in the neighborhood would enjoy the post-punk band Yeah Yeah Yeahs, as Brooklyn Park Commissioner Spiegel and Councilman Yassky’s office assured me. Whether most people in the neighborhood can even afford the tickets is the question—they run about $50 with box office fees. Hard to dole out on a $17,500 annual income (Greenpoint’s median per-capita income, according to the most recent U.S. Census); harder still on $11,270 a year (Williamsburg’s median). Seventeen percent of Greenpoint residents live below the poverty level; 41% in Williamsburg.

A free concert featuring lesser-known bands is being offered as a sop to the community. Kelly Shields and Aron Schielke, a young Williamsburg couple walking near McCarren Pool, say they plan to go. But they wonder where the audience will sit and where the stage will be. Other than the newly painted red arch, no visible construction has taken place in anticipation of the concert series. “I hope they’ll keep it,” Shields says about the pool and the bathhouses. “I hate to see old cool stuff disappear and new blunt buildings go up in the neighborhood,” she says, pointing to a new high-rise that looms behind the bathhouses. As she points, three teenagers climb over the fence into the pool complex, struggling to heft their trick bikes across. They begin performing feats under the glaring sun in the empty concrete shell. The dry pool suddenly becomes alive with laughter and the spinning, leaping, and twisting of bikes.

Whether McCarren Pool will ever be a pool again remains to be seen. Like Jessica Jimenez says, “It could be soooo many things.”

We are in Open Circuits: Writings by Nam June Paik

We Are in Open Circuits focuses on the writing practice of Korean American artist Nam June Paik (1932–2006), often referred to as the founder of video art. At over 400 pages, this book provides privileged access to Paik’s artwork plans, music scores, Fluxus instruction sheets, and handwritten and typewritten texts.

The losses we carry across: an afternoon with Azza El Siddique and Sahar Te

What a slippery and fugitive word translation is. There are so many factors that come up and collide in this way. When I begin to reflect on translation, I’m thinking who is doing the translating?