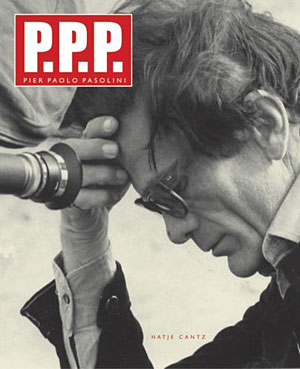 “The only language that can be called ‘language’ without qualification is the language of natural reality.”
—Pasolini

Pier Paolo Pasolini was an intellectual Renaissance man who embodied every contradiction imaginable. A prolific writer who worked in every genre, Pasolini directed 22 films, developed his own theory of cinema, and was a fierce social critic of mainstream Italian culture. He was also a Marxist who continually evoked the sublime in his films, whether through re-creating Renaissance paintings as mystical stage-sets for his dramas, or through the steady gaze of a camera on its holy human subject. As such he is an over deserving subject for both a collection of critical writing, and a book of high quality reproductions from film stills, art work, and poetry facsimiles.

Released last year in conjunction with a German exhibition of the same name, P.P.P: Pier Paolo Pasolini (Hatje Cantz, 2005) attempts to unify his oeuvre into one comprehensive monograph. At first glance, it recalls other stylish celebrations of acclaimed filmmakers, such as Forever Godard, or Taschen’s auteur director series. The book’s subtitle, Pier Paolo Pasolini and Death (taken from the opening essay by Giuseppe Zigaini, a self-styled scholar and former friend of Pasolini) is a defining concept that permeates all areas of the book’s design and writing. P.P.P.’s function as an expanded catalog for a multi-media exhibition, which took place at the Pinakothek der Moderne in Munich in 2005, results in a conflict between visually exciting graphic design that seeks to brand the filmmaker for “cool” consumption, and academic writing that secures his art in an ivory tower of theory.

P.P.P. is made up of seven well-researched essays on different aspects of Pasolini’s life and art, interspersed with film stills, rarely seen early paintings and drawings, and an artfully rendered filmstrip timeline of important events in the filmmaker’s life. The book’s filmography is a reminder of how many of the films, such Comizi D’Amore (Love Meetings) (1963), a series of interviews on the subject of sexuality, were radical not only in subject matter, but in formal ingenuity.

According to the editors of P.P.P., the impetus behind the exhibition came from Zigaini’s life-long project of constructing an incoherent, mystical narrative based on the life and death of Pasolini. A cross between a detective and a theologian, the former friend of the filmmaker, is committed to “deciphering a mythical and religious code that imparts a compelling meaning to Pasolini’s oeuvre.” Zigaini believes that Pasolini was an “artist who wanted to express himself by dying in a scandalously existential-linguistic-religious project.” In an attempt to add authority to his pseudo-analytical writing, and perhaps to copy Pasolini’s own style of literary pastiche, Zigaini liberally quotes from Barthes, Freud and Jung to the effect that any real meaning gleaned from their ideas is completely nullified. When Pasolini quotes Barthes, as he does in the story Rital and Raton, it is to elucidate his own linguistic-based humanism (“the grasping of a real language is for the writer the most human literary act”), not as a smoke screen to hide behind.

The essay, “The Chosen Image,” by one of the book’s editors, Bernhart Schwenk, is a more readable approach to cinematic interpretation. It is a meditation on Pasolini’s employment of the single frame image (or “living still”) to convey transcendence. In Il Vangelo secondo Matteo (The Gospel According to St Matthew) (1964), the camera lingers on the varieties of expression in the rough beauty of non-actors’ faces. The close-up shots, “almost like documentary footage…familiar to the spectator, called up like déjà-vus of collective visual memory,” far surpass their function as mere elements in the Bible narrative; they are read as open to interpretation, as pieces of an ambiguous holy scripture. This filmic technique is not limited to faces. In Mamma Roma (1962) a single frame of the dome of St Peters seen from the window of a prefab modern housing project becomes a charged image, a “heavenly Jerusalem of the bourgeoisie.” Pasolini was not alone in his experimental subversion of the film medium to reveal states of grace, or non-grace. Andy Warhol’s Empire (1964) demonstrates the technique of stopped time to the limits, revealing the stripped, “boring,” meaninglessness in an iconic image, whereas Chris Marker’s La Jetée (1961), a masterpiece of filmed still images, centers on an enigmatic moment of three second movement—the miracle of film merges with the miracle of consciousness.

Schwenk also deals with the misconception of Pasolini’s early films as the poetic progeny of the previous decade’s predominant cinematic form, Neo-Realism. “In contrasts to the Neo-Realists, Pasolini never sought fidelity to the truth, but rather a stylization of reality, its aestheticization.” While Pasolini struggles with the same raw materials as Rossellini and De Sica, (Italy’s post-WWII working class and depressed economy), his artist’s vision is always the dominant subject of the film. In this sense he is much closer to Fellini (with whom he wrote the screenplay for Nights of Cabiria), but wielding a decidedly more complex concoction of Marxism, sexuality, art history, and spiritual belief.

Other writers in the book take a more single-focus approach to Pasolini’s use of the visual image. Marc Weis structures his essay around the director’s friendship with art historian and Piero della Francesca scholar, Roberto Longhi. From 1939 to 1943 Pasolini studied under Longhi while at the University of Bologna, completing a thesis on the city’s resident painter, Giorgio Morandi. Weiss sets up a relationship between Longhi’s humanistic critique of Renaissance paintings, and Pasolini’s own painterly vision as a filmmaker. Longhi’s interpretation of Piero’s angles as “sublimely peasant-like, but not rough…angelic youths come to earth like oak trunks, with thick ankles that in a few years will be unshakeable,” finds its cinematic counterpart in Pasolini’s street youth angels in The Gospel According to St Matthew. Likwise, Longhi’s interpretation of Caravaggio’s Bacchus as a “sleepy worker in a Roman osteria,” runs parallel to Pasolini’s own unorthodox casting of street urchin Ettore Garofalo, the troubled son of a prostitute in Mamma Roma, who was first spotted by the director at his real life job as a waiter in Rome. The symbiotic love affair with painting is explicitly dealt with in The Decameron (1970), in which Pasolini embodies the role of a painter, both within the film as Giotto, at work on an elaborate fresco, and as a director, constructing fantastical tableaus of peasant life based on Breugel paintings.

A crucial point that each writer returns to is Pasolini’s commitment to creating a new form of language (both cinematic and literary) that is at times minimalist in its emphasis on still photography, or baroque in its pastiche of visual sources. Unfortunately P.P.P. lacks a section devoted to Pasolini’s poems in translation, or any essays that deal exclusively with his early career as a novelist and journalist. However, the inter-disciplinary nature of Pasolini’s art allows each writer ample space to draw comparisons between the visual and the literary. In the essay “Transmediality and Pastiche,” by Benjamin Meyer-Krahmer, the filmmaker is described as a master of pastiche, delineating a metaphysical meaning in the space where his myriad sources come together. Pasolini’s own essay on film theory, “A Cinema of Poetry” (1965), is itself a work of diffuse literary influences, a veritable “pastiche” of sources and ideologies. At times the filmmaker’s language seems to combine the manic energy of Marinetti’s “Futurist Manifesto” with the rough romanticism of beat literature—”When I make a film, I shift into a state of fascination with an object, a thing, a fact, a look, a landscape, as though it were an engine where the holy is about to explode.”

Pasolini’s short story Rital and Raton (1965) showcases the author’s unique formal writing; part literary/semiotic essay, part dramatic narrative. The story juxtaposes the youth intelligentsia of Paris, seeped equally in Godard and the idea of revolution, with a tormented young man from Algeria. For the bohemian-bourgeoisie of the Left Bank there will be “no encounter with any language, nor will they put themselves in a position to conceive any different vital experience.” For Brahin, an emotionally and mentally wounded young Arab, a trembling urge to communicate pain takes the form of a horrific tale of rape and incest. Pasolini directly challenges the reader to “not be carried away by your moralism,” but instead to imagine another person’s reality. The untranslatable parts of language, “pure abysses of previous existence,” spoken by Brahin, find their apotheosis in the medium of film.

Pasolini’s fierce loyalty to the struggle of the working classes was at times at odds with the prevalent romanticism of 1960s radical politics. A member of the Communist Party from 1947 to 1949, Pasolini’s politics have always been fed on an awareness of the past, specifically his involvement with the writings of Antonio Gramsci, the architect of an Italian Marxism that challenged the cultural hegemony of Fascist politics. In the essay, “The Changing of Culture by the ‘New Fascism,’” Loris Lepri examines Pasolini’s politics of the late 1960s and early 70s. Acutely aware of the sea change of “mass consumerism” and “mass hedonism” that was taking place in Western Europe and America, Pasolini describes this phenomenon as manifesting itself in a total conformity of style, in which workers, students, fascists and anti-fascists all dress alike.

When I see young people giving up the old traditional values and absorbing the new models capitalism prescribes them, and in doing so accepting a certain kind of inhumanity…behaving both passively and inflammatory at the same time, it reminds me of the SS, who were just like that.

Not one to mince words, Pasolini takes on the role of a prophet—ahead of his time by his own effort to travel back in time to an ancient, forgotten “pure” religion of the individual. With this tremendous gift—to be both inside and outside his own time—Pasolini edged the world a little closer to its own reflection.

P.P.P. raises important questions concerning the obscure, shifting nature of film scholarship, and the critical re-assessment of a director’s career, as well as walking a thin line between a hip modern design and articulate meaning. A more serious problem is that the architects of the P.P.P exhibition and book are enamored with the concept of Pasolini’s death in relation to his entire creative output. With only a few notable exceptions, every essay in the book returns to the enigma of the slain director as its final image, as if death can be “read” in the same manner as a filmmaking technique or form of language—thus committing a serious disservice to a radical thinker who above all else was a tireless artist-worker, seeped in the language and struggle of his present reality.

Georg Büchner and the Missing Language

Georg Büchner was a rising star in Germany’s 19th century literary scene. A prolific and thought-provoking writer, he was a counterculturalist whose life was cut short; he died at age 23. Two centuries later, writer Sam Kahn explores Büchner’s impact, and how he may be the missing link in the history of theater.

The thread between structure and consciousness weighs on the mind of Sebastián Maria, the Colombian-American composer, producer, and DJ based in New York City.