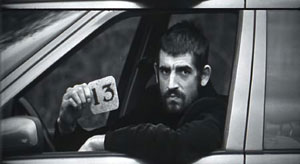 In the view of first-time director Gela Babluani, a life is not worth much—it can be bought or sold on a whim. Sometimes that whim originates with the owner of said life, sometimes it arrives on the wings of market forces. Either way, when the bill comes due, it’s instant karma time.

Babluani’s simple story and complex morality, his ease with a camera and dedication to the nuances of his wholly original thriller milieu make 13 (Tzameti) easily the best film of the year so far.

The director’s charismatic brother Georges plays a day laborer somewhere in Day-Labor Hell, France. He overhears his part-time employer discussing a shady deal with her junkie boyfriend. The boyfriend’s convinced big money’s coming his way, though he barely has the strength to get up and take another shot. When the boyfriend does take another, it’s his last, and Georges steals his place in the deal. Of course, Georges has no clue what the deal is, and once he learns, it’s too late to back out.

It’s a Fritz Lang/Jean-Pierre Melville concept: fate rides in on coincidence and a choice taken to escape a lack of options usually leads to—guess what?—an even worse lack of options. Those who prefer to regard noir, especially French noir, as a capitalist critique will find plenty of grist for their mill. My take is that’s not Babluani’s first priority, but the sub-text is there. His first priority is suspense. Second is horror. Third is a rare treat in a contemporary thriller: the viewer cannot resist putting himself into Georges’ place and trying to figure out what to do next.

Babluani’s merciless view of life and fate is even more exacting than Lang or Melville’s, which hardly seems possible. Unlike any thriller debut I can recall, unlike even Tarantino, Babluani’s hard moral tone and rigorous, explicit violence seem entirely earned and owned, with no cynicism or exploitation. If he gave way to either demon, 13 (Tzameti) would turn into self-parody. Instead, it remains gripping and convincing to the end. The very end, believe me. 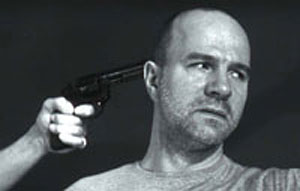 In the Lang universe, the imp of the perverse usually sets a character on a collision course with his/her own best interests. Melville’s characters always operated in a world where Law holds no sway, but everyone knows the Code. The transgressive mistake that dooms his protagonists involves either breaking the Code or refusing to. Georges’ decision to force himself into the deal proves more perverse than he dreams. (And, in true Lang fashion, he has to ride to his unknown fate on a good old-fashioned noired-out train) He’s thrusts himself into a world where Law is a distant memory and Code is all. Everybody else knows what the Code demands. Confused as hell, but not exactly terrified, Georges solves his problems with tools neither Lang nor Melville ever regarded with respect: the ability to adapt in a heartbeat and pure dumb luck.

The cool remove of Babluani’s visuals nourish the air of dislocation and pointlessness that dominates the first quarter of the picture. Once Georges makes his decision, the pace of shooting and cutting picks up. Babluani keeps his distance no matter how intimate the story becomes. That distance suits the extreme violence well. It also plays as a bit mannered once or twice, but this is a low-budget indie.

I’m keeping things vague because, believe me, you’ll be better off reading nothing about the plot before you see 13 (Tzameti); the potential for spoilage is huge. Expect violence, and roomfuls of sweaty guys with compelling Jean-Pierre Melville-type character-actor faces and sparse, hard-bitten dialogue and detailed conversations contained in the eyes of two silent tough mugs staring one another down and a pretty good score reminiscent, in the best way, of Eric Serra’s music for the early films of Luc Besson. Expect also plot terrain never before explored. Never before—all the hallmarks of French film noir (B/W cinematography, little explanation or context, flat-top haircuts, weary well-meaning cops, big-ass stacks of money, pistols tucked into belts under cool new suits, arguments settled and begun in two sentences) and a brand new plot idea. Plus, the director’s only twenty-six.

The Shaw Brothers produced films with the same grandeur (albeit slightly smaller budgets) as old Hollywood. By the ‘70s, the Shaw Brothers became synonymous with kung fu, producing cream-of-the-crop martial arts epics. This series offers a wondrous selection of Shaw classics. Do not miss the three films by choreographer-turned-kung-fu-auteur, Liu Chia Liang. My Young Auntie plays with notions of gender and generational reverence, showcasing Liu’s ability to combine ferocity, grace and humor. The striking Hui Ying Hung manages to go from demure to sultry in a heartbeat with her lightning-fast martial artistry. The cheekily translated Dirty Ho proved innovative with its scenes of a suave fugitive prince clandestinely using a boisterous young braggart as a kung fu puppet. Legendary Weapons of China is often considered the ultimate kung fu film and features Liu in the lead, though the real stars are his fighting skills and the eighteen traditional weapons that the title refers to. Another highlight of the series is The Magic Blade, a phantasmagoric entry in the wu xia genre (mythic tales of martial chivalry). Director Chu Yuan specialized in wu xia and here pulls out all the stops, offering a very Chinese, and very psychedelic, fantasy in the same transcendent B territory as Mario Bava’s Hercules in the Haunted World.