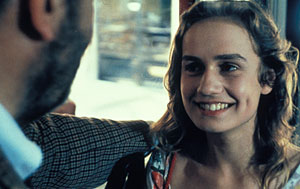 Director Maurice Paliat, with his bear-like frame, passive-aggressive mumbly voice and glittery impassive eyes, makes for a convincing Bad Daddy. Few of those who work with him once come back for more. His psychological games—designed to elicit primal emotions from his actors—and dictatorial postures create a dysfunctional atmosphere on his sets, one in which Paliat thrives. He’s not the first director to prefer those methods, but he may be the first to so nakedly demonstrate his own Daddy-malice on-screen. In A Nos Amours, he plays the sinister pater familias of an unraveling Parisian family.

Dad smacks mom, son and daughter—sixteen-year-old future star Sandrine Bonnaire (looking mighty pre-nose job in 1983)—without provocation. When Dad bails on the mess he’s made, closet-case son takes over smacking daughter and cuddling mommy as inappropriately as Dad cuddled daughter. Mom breaks into fits of high-pitched hysterics and assaults daughter with her fingernails, who fights back with fists and hair-pulling until son starts smacking daughter and cuddling mom.

Thus contextualized, Sandrine Bonnaire develops a secret life as that staple of French cinema: the blank-faced, monosyllabic, sexually budding, emotionally stunted, red-hot tweener, young enough to be semi-forbidden, old enough to possess zee primal weesdom… Bonnaire does seem profound beyond her years, and takes on the gruesome pursuit of a high-school sexual identity with realistic naïve curiosity and callous disregard. She’s both astonished when others hurt her feelings and indifferent to those she savages. Her distance from her life outside the house contrast with her vulnerability to life inside it, and that contrast produces the drama. That drama plays out in process, as Bonnaire faces the quotidian realities and we follow her around.

Paliat’s style is as affectless as Bonnaire’s demeanor. He utilizes a post-New Wave neo-realism, fused with his own voyeuristic sensibility. The camera seems present as a witness—rather than as a metaphorical framer of action—and as a furtive eavesdropper. This generates a powerful dirty feeling in the viewer, even when nothing dirty happens. Casual dinner conversations seem more prurient than the sex scenes, which are never that explicit anyway. Bonnaire matches Paliat’s studiedly casual style by fully inhabiting her scenes without ever appearing to be acting. Her harrowing dialogues with Paliat (as daddy) seem utterly perverse, and it’s impossible to watch them without wondering what went on off-camera.

A Nos Amours comes shortly after Godard’s study of oft-naked, aggressively deadpan French hotties (1980’s Sauve qui peut (la vie) starring Isabelle Huppert) and a decade before Krzysztof Kielowski’s trilogy of same, Troi coulers: Bleu (1993), Bialy (1994) and Rouge (1994). All four films fill the frame with constant close-ups of a gorgeous, mostly silent, presumably profound young French woman. Not much happens, and we’re supposed to take the mundanities of their lives as struggles of great universal import. Sometime the magic works, sometimes it doesn’t. And as powerful as A Nos Amours can be, the question remains: would any of these films garner the raves and audience they have, if the central roles were played by Kathy Bates or Aida Turturro?

The 50th anniversary edition of The Searchers looks amazing. The Technicolor burns like lurid candy, and John Wayne’s double-breasted red cowboy shirt pops off the pale background tones of Monument Valley. There are moments of such Heroic Realism in the framing; Ford fills the screen with manly purpose and fascistic will. His compositions, though stirring, evoke the future-pointing figures in Mao suits from the heyday of the Cultural Revolution. There are moments—dislocated random moments that do not advance plot or character—of awe-inspiring beauty and instant American mythology: that shot of Wayne framed in a doorway we’re all so tired of by now, Wayne andy Jeffrey Hunter floundering down a snow-covered hillside under a merciless blue sky, a cavalry company splashing through an icy river. These mythological images—no matter how divorced from narrative concerns —have helped The Searchers maintain a critical reputation far beyond its actual worth as cinema. Sitting through it today is an exercise in abstraction—there’s no story to hold the imagination, no human emotion save petulant anger, no recognizable interaction between men and women. Every five minutes there’s an amazing shot, but to what end? The other default abstracted position is to note how much, and how well, Leone stole from this picture. He apparently took Ford’s cartooning of human emotion and Western tropes literally. Leone grokked the Pop aspects of separating visual beauty from credible story-telling, and Popped Ford to the next level of absurdity. If you haven’t seen The Searchers in a while, you might be astonished at what a short step that takes.

Ford’s great films—Fort Apache, My Darling Clementine and Grapes Of Wrath—feature compositions as iconic and tough moral landscapes as unforgiving as those in The Searchers. But they also feature people who behave and respond like recognizable human beings. Granted, the women in Clementine are almost as reductive, sexless, hysterical, ornamental, superficial and secondary as the women in The Searchers. But Ford’s for-once honest presentation—in Clementine—of the dark side of the sou (as represented by Walter Brennan as a Lear-like outlaw Pappy) sears with genuine pain and loathing. The over-amped attempts to express a dark side in The Searchers seem mannered and always schematic. The men, aside from Wayne, are almost as hysterical as the women. Jeffrey Hunter, playing Wayne’s unwanted sidekick, loses his shit like a five-year-old every time Wayne thwarts him. Again and again Hunter kicks the ground, wraps himself in his blankets and wrenches his pouty head to the side. It’s one of the least credible and most irritating performances in Westerns. And it must be the performance Ford wanted. Unless there’s a camp subtext here too subtle for me to discern, I can only conclude that Ford’s ideas of emotional expression stopped at the 8th Grade. Along with Hunter’s hissy-fits, there are the time-slowing cartoon characterizations, like a pi-jiminy immigrant ranch father and the walking retard-joke Hank Worden as the addled Old Mose. These guys just crack Ford up (how drunk was he really?) and he pounds us over the head with them.

While Ford’s compositions are heroic, the literal content of his frames plays as dated and shockingly crude. During the battle scenes, stuntmen wrestle their horses’ reins with all their might, pulling their rides down so we can pretend we think they’ve been shot. During the two heart-stirring tracking shots of Wayne & Party charging through the Comanche village, it’s clear that Ford never bothered to stage a battle—he had the assembled horde ride up and down while he filmed. Though a pathetic selection of played-out real Native Americans hold up rifles and painfully mime shooting at someone, Ford wrecks any credibility gained when he cuts to the Comanche chief. Then Henry Brandon steps up—an Italian character actor who looks like he was dipped in deep tanner and then turned on a spit.

What made The Wild Bunch such a revolution was that in Peckinpah’s frames, guys who got shot looked like they’d gotten shot. Horses really fell down, bridges blew up, men hated and loved one another with passion and the blood flew. Pecinpah enabled the Western audience to stop pretending. When will critics do likewise regarding The Searchers? 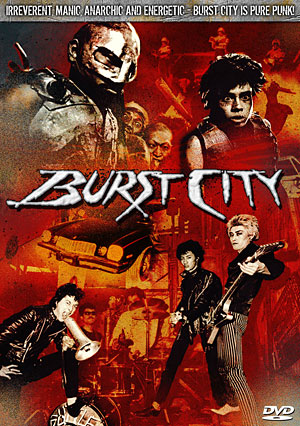 Unlike most Japanese filmmakers, who learned their craft through the rigorous studio apprentice/assistant system, director Sogo Ishi began shooting films in 8 mm as a college student. His first film, Panic High School (1977), a tale of violent teenage rebellion, became so well known that a major studio, Nikkatsu, invited Ishi to remake it when he was only a sophomore. His senior project, Crazy Thunder Road (1980), a post-apocalyptic biker film shot in 16 mm, was picked up by Toei (and blown up to 35 mm) for theatrical distribution.

Ishi’s early films exhibit a predilection for kinetic action, and his frenetic camera work recalls the yakuza films of Kinji Fukasaku. Yet Ishi’s most prevalent stylistic influence derives from his involvement in the first wave of Japanese punk rock. Both Crazy Thunder Road and its follow-up, Burst City (1982) possess an anarchic fervor that embodies the punk rock spirit. Burst City also features electrifying performances (as well as ‘acting’ turns) by Ishi’s friend’s bands The Roosters, The Battle Rockers and punk rock superstars The Stalin.

The plot of Burst City—punk rockers and bikers in conflict with police and yakuza over the building of a nuclear power plant—is marginal. Taking precedence is a series of intense, chaotic set pieces that chronicle various transgressions including drag racing, rioting and punk rock concerts. With a two-hour running time and energy that often revs up to 200 horsepower at 120 per, Burst City can be exhausting. Yet it is this same urgency that makes Burst City such a fascinating spectacle. Some of the film’s most riveting moments are the gigs. Documented in an neo-realist manner, these scenes create a fascinating contrast to the film’s cyberpunk sci-fi milieu. One stunning sequence has a crew of riotous punks with baseball bats storming the stage to attack a group in mid-song, forcing the band to defend themselves with their guitars and drum sticks. Ishi’s camera remains centrally located throughout, keeping us in the thick of the action, eliciting an emotional reaction as primal as the sound of buzz-saw guitars and crashing drums. Ishi would also go on to direct music videos and concert films for various artists including The Stalin and Einstürzende Neubauten as well as Japanese pop divas Chara and UA.

Burst City takes place in a bombed-out dystopia, created on provocatively crude sets and barren factory exteriors. Leather and metal clad outcasts, corporate yakuza and futuristic ‘battle police’ continually clash with each other amongst post-industrial urban ruin. They drive around in souped-up sports cars, one of which tellingly bears the slogan ‘speed kills’ on the hood. Speed is an integral element of Ishi’s stylistic framework, exemplified by rapid-fire cutting, restless camera movement and fast motion, reflecting the relentless rhythms (and primordial emotions) of punk rock. Ishi also experiments with cinematic techniques, such as one sequence where a face is superimposed over strobe-like fast cuts of oncoming car headlights. Such experimentation abstracts the images, removing them from their narrative function to increase their visceral impact. All these stylistic trappings combine to affect an ominous atmosphere of gloom and menace while suggesting liberation from youthful disenchantment. With more emphasis on a punk aesthetic than a dramatic arc or character development, the look and feel of the film becomes a character in itself. The audience is invited to take solace in what might appear as mindless violence, yet is a heartfelt outcry against a repressive establishment with a bleak future.

The ushers at the New York City premiere of choreographer Pam Tanowitz and pianist Simone Dinnerstein’s New Work for Goldberg Variations at The Joyce Theater warn me that the program is 75 minutes—75 minutes!—with no intermission. It’s possible they have to tell me this, but either way, the length of Bach’s “Goldberg Variations” (which, apocrypha alleges, he composed in 1741 as an anti-Scherezade to help an insomniac count finally sleep) intimidates.

Artists make art and conservators preserve that art for posterity. The creative impulses differ but the engagement with material, sensitive regard for appearance, exquisite play with intention, and flat-out work bear a comfortable familiarity that enables intellectual interplay between them.