The original Omen, which debuted in 1976, is often discussed as one panel in a triptych of classic horror films about demonic youngsters, the other two being the 1968 Rosemary’s Baby and The Exorcist, released in 1973. All three movies weave some of the kinkier strands of Christianity into tales about children who—their parents realize only gradually, and with mounting terror—embody pure evil. It was a theme with special resonance in that tumultuous era, when the nation’s youth seemed bent on destroying everything their parents believed in. 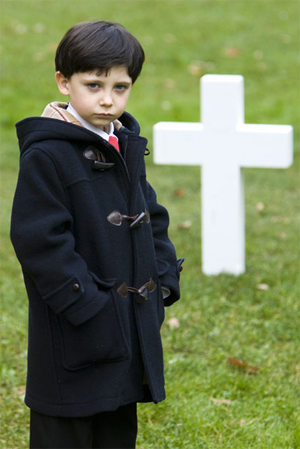 The times were indeed a-changing, but not entirely as predicted. The revolution collapsed into disco and the country swung to the right. The rebels of the 1970s cut their hair, took on billions in household debt, and bore kids of their own—kids too worried about being able to pay off college loans and afford their own place to do much rioting in the streets. And in any case the generation gap is by all accounts as dead as vaudeville, now that we all listen to the same music and wear the same clothes.

Nevertheless, Fox’s new remake of The Omen shows that a story about a satanic child and the parents who loathe him still resonates—and gets some additional kick from its pandering to today’s religious hysteria.

One thing that hasn’t changed in 30 years is The Omen’s plot. Robert Thorn is an ambitious U.S. diplomat, Kathryn Thorn his beautiful and beloved wife. The chiseled, rigid beauty of the original pair, Gregory Peck and Lee Remick, implied social certainty and effortless privilege, while the 2006 Thorns—the younger, lumpier Liev Schreiber and Julia Stiles—are earnest strivers who betray an undertone of angst even before Satan muscles into their marriage. 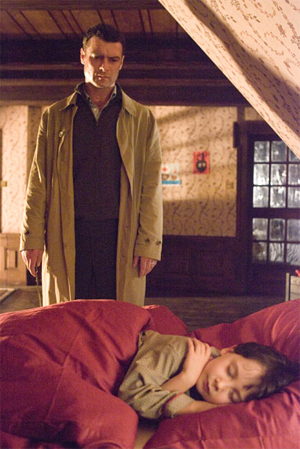 When the couple’s child dies at birth in a Roman hospital, a priest convinces Robert to spare his wife the anguish of learning she has lost her baby by substituting a newly orphaned infant born that same night. Robert is soon made U.S. ambassador to the United Kingdom (apparently the Devil prefers British methods of early childhood education) and all seems well until the little boy’s nanny hangs herself in the middle of his fifth birthday party.

Everyone is horrified except for little Damien, played by Seamus Davey-Fitzpatrick, the face of evil as rendered by Keane. This pallid urchin’s unblinking self-possession indicates he knows damn well who he really is. So does his new nanny, a scarily saccharine Mia Farrow, who tells the little boy, “I’m here to protect you”—not from the slavering black hounds that have begun appearing in Damien’s vicinity, but from his increasingly worried parents.

Deepening Robert’s unease is a visit from a mad priest who prattles about the coming apocalypse and warns the ambassador that his little boy is the Anti-Christ. When the priest’s warning that the child will kill his parents begins to ring true, Robert and a psychic photographer sidekick (David Thewlis) hurry off to Rome, Jerusalem, and an ancient graveyard to learn the secret of Damien’s identity.

As smooth and stately as the original, the new Omen is also visually luscious and full of nicely timed shocks. If the gore is modest compared to contemporary slasherei, that too is part of its allure. Pretty and efficient, it may not be great but it’s the perfect accompaniment to a tub of popcorn.

The differences between the 1976 and 2006 versions are small but telling. In the remake, Damien’s menacing otherworldliness takes on an autistic cast, putting a sinister spin on the terrors of too many real-life parents. In one of the more chilling scenes, Kathryn wakes from a nightmare and goes down to the kitchen, where she finds the baby Beelzebub standing in the dark, holding a gleaming knife. He’s just making himself a PBJ, yet the chill only deepens when he walks out carrying his sandwich without acknowledging his mother’s presence—behavior so unlikely for a little child that it’s genuinely disturbing.

Another way the new version departs from the old is in the richness of its visuals; director John Moore has put his experience in high-end commercials to good use. Much of the film was shot in Prague, which provides gorgeous indoor and outdoor architecture standing in for the Vatican (where priests anxiously track evidence of the Anti-Christ’s arrival), the Thorns’ English mansion, and the cobbled streets where much of the drama plays out.

Red is repeatedly used as a metaphor for evil and death. In one beautifully composed shot after another a neutral background—a snowy graveyard, a hospital room, a white bath—is stabbed by a swath of crimson, signaling that the Devil is indeed in the details.

Speaking of the Hornèd One, some critics have complained about the film’s wacky theology, but in that department The Omen holds up at least as well as any other thriller based on Revelations. Those who are exasperated by its high-church high-jinks should take the matter up with the Vatican rather than Twentieth Century Fox.

Where the latter invites criticism is in its slimy appeals to current religious wing-nuttery. On the film’s website, director Moore assures us that “in just the past four years alone, the world has been hit with devastating events—political, natural, and man-made. One can’t help but notice a certain momentum.” Indeed, 9/11, Katrina, and the South Asian tsunami are all referenced in the film as signs of the end times.

Moreover, the site’s “Fearfully Asked Questions” page warns that technology will eventually stamp us all with the bar-coded “mark of the beast” and that “global warming is caused by the widespread sin, immorality, and materialism of our current society.” Omen fans can be assured that the signs that “we are in the end of days…are all around us.”

One wonders how many Fox executives have been giving away all their worldly goods in preparation. And how many of the people who genuinely worried that Armageddon might occur on 06/06/06 realized that they were being suckered by a Hollywood marketing campaign?

The movie itself, by contrast, sincerely adheres to its mad creed; neither version of the film cultivates any ambiguity about the Thorns’ growing conviction that their little boy is out to annihilate them, and all mankind to boot. That would make for a more interesting movie, perhaps, and certainly a more plausible one. But one reason The Omen is so satisfying is precisely that Robert and Kathryn know for certain what most of the world doesn’t want to admit: that parenting is, among other things, a fight to the death against a small but awesomely powerful foe.

Most people don’t believe their toddler is the Anti-Christ, of course, although the momentary desire to murder a difficult child probably sweeps through almost every parent now and then. But the fact is that our children are not only our future but also our end. Our adored enemies, they will take whatever we give them, our love most of all, and use it to their own ends. They will burden us, redefine us, surpass us, oversee our decline. Unless we are terribly unlucky, they will bury us.

Sure, this is all part of nature’s plan (or God’s, if you prefer), but that doesn’t take the sting out of it. No matter which way the political pendulum swings, the war between parents and their offspring is a quagmire from which we can never extricate ourselves. The Omen’s gloomy acknowledgment of this rarely acknowledged aspect of family life remains its greatest charm.

Mayer’s exhibition is contemplative and compact, a deep dive into a body of work not seen since it was first exhibited in the late 1970s and early 1980s.