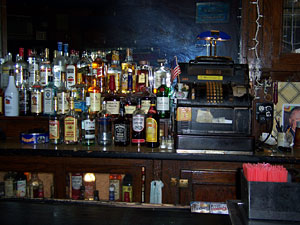 Entering Peggy’s, we interrupted a conversation between the barmaid and Sal about when infants get their first erections. Sal speculated that it was around age two, but Sylvia disagreed vehemently. I’d accompanied my father to his Son’s of Italy dinner at the union hall, and on the way home we’d decided that a nightcap was in order.

“Six months,” Sylvia was saying loudly. “I’m telling you, six months. I wash Johnny off after I change him, and when I go around his eel, it pops up like a fucking taxi meter. I tell him ‘Hey, you put that bad boy away. There’s plenny a years yet for that.’”

She poured the bourbon, left the bottle on the bar—a sweet display of trust—and stepped into the dark anteroom where the ice machine chugged and hummed. She was the first woman to ever work behind the stick in Peggy’s, and contrary to what I would have figured, the pensioners loved her. They kidded and flirted, and left what for them were big tips. Sylvia was maybe thirty, about ten years older than I was. I thought she looked like a fireplug in a yellow fright wig, but most of the weeknight drinkers were ringed as redwoods, so it was probably exciting for them.

“Six months I’m telling you,” she called from the darkness.

Sal looked skeptical, but she’d convinced me. It wasn’t the sort of trait that I figured a woman would idly brag about in her son. A man, certainly, but probably not a woman.

I flashed on the stories I’d heard about my Christening party. My father holding me naked, upside down, in one hand, by the ankles, like something he’d shot. Showing everyone how well the circumcision had gone, and predicting that with a salami like that I’d be beating the girls off with a stick. “Amazing, when you consider he’s half Irish,” he’d say to guests in my mother’s family. Eventually I was liberated from his grip by a great aunt, who stashed me in the kitchen with the older women until he went downstairs with his cousins to play cards on the stoop.

I looked at him as we pulled up a couple of barstools and joined Sal. I tried to see him as a young man at my baptism, swinging me around the room and boasting. His face and body were essentially the same; older and a little heavier, but he’d always had that linebacker-gone-to-seed frame, even as a kid. The change was in his eyes.

He used to have what my mother called a chinaman’s smile; a grin so expansive that it separated his face into two clearly defined halves, and stretched his cheeks to the point that his eyes did in fact take on an Asian caste. It was a look I missed. I felt that no matter what happened to him now, an orgasm, passing a kidney stone, or hitting a number, he would no longer allow himself that level of joy.

It had been nearly two years since my mother’s death.

“What are you looking at?” he whispered. “I got something on my face?” He wiped his hand quickly under his nose and around his mouth and chin.

“Yeah,” I said. “It was nothing. A piece of cigarette paper on your lip. You got it.”

Sylvia brought us each a beer, and while my father and Sal fought over buying the first round of shots, I paid for everything.

“What were you talking about when we walked in?” my father asked them.

“When they first get a hardon,” Sal added.

“You people,” my father said pointedly, “really oughtta get a fuckin’ hobby.” Then he laughed, and I laughed with him. His gut shook and he slapped the bar. Still, his eyes remained sadly rounded.

TIM MCLOUGHLIN is the editor of the Brooklyn Noir anthology series.

“She said, the center cannot hold,” Marianne Shaneen narrates over meditative drone footage of Lebanon, Kansas projected on a split-screen. This phrase in the opening sequence of Peggy Ahwesh’s 2019 video installation Kansas Atlas (2019) is an apt description for the practice of the vanguard experimental film and video artist.

The Dramaturg’s Perspective: A Conversation with Amauta Firmino

Writer Alexi Chacon talks with Amauta Firmino, the Dramaturg of Slave Play, about his work on Broadway’s most TONY nominated play in history, his dramaturgical process, and surviving as a dramaturg.

In Verily! the Blackest Sea, the Falling Sky (2017), a two-channel video work, Peggy Ahwesh takes us on a journey from the ocean’s primordial depths, filled with squids and Leviathans, into the reaches of outer space.

Writer Alicia Ramírez digs deep into the complexity of the absence of in-person theater and its effects on mental health with avid theater goer and arts educator, Jesús Dávila, and Dr. Alisa Hurwitz, a psychologist knowledgeable in theater and the arts, in a roundtable discussion.