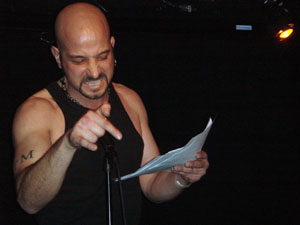 I walk alone into Sputnik, a standard retro dive bar. I sit down at a booth and the bartender recognizes me. It makes me feel better because I’m weak. People start to show: good alternative folk holding down the fort in a Red State. I’ve got to make this Denver reading count. For them, for me. We are not in friendly territory. Bush bumper stickers, John Elway car dealerships. Middle America is breathing down my neck.

At the end of the bar there’s a group talking way too loud. Not fight-the-system loud, but stupid, disrespectful loud. The kind of loud you get from frat boys who scoff at protests on their lunch break. They’re making a ton of noise that translates into “we think this is bullshit.” The town’s got morons here who dress Lower East Side, but still think George W. Bush is a great guy.

My friend Brian Polk opens with a short reading from his zine, The Yellow Rake. My hope was they would shut up, go away. But they get more obnoxious. They’re talking so loud that you can barely hear Brian read. They’re condescending, making fun of him. One of the louts yells out to throw Brian off the stage. He finishes his reading to embarrassed applause. Everyone knows the gig is being ruined by these morons. They call out for drinks, they are reveling in it.

I stand up to go on. I grew up reading in some of the worst, punk rock shitholes in America. I’ve overcome bikers, methed-out freaks, cholos, skinheads and sorrowful brothers who had no place else to go. I’ve read in some of the most pretentious art venues in the country where I got white uptight crowds to stop chitchatting and dig on something they never heard.

But these people are mocking us. There is an intentionality about it. I say that “we’re all in this together” and they laugh at me. I ask them to be quiet and they continue yacking like I don’t exist. The audience is getting tense. The vibe is turning dark negative. I stand my ground in the middle of the bar, getting more pissed off with every word, now going hard right at them:

The words inspire me to action. I stop reading. Pure and focused, I drop my book and walk over to the main jerk sitting next to his girlfriend. I stare him right in the eye:

“DO YOU THINK I’M GOING TO LET YOU FUCKING DISRESPECT ME!! Do you think I’m going let you disrespect the people who came here tonight!! If you don’t want to be here, THEN GO OUTSIDE AND SMOKE A FUCKING CIGARETTE!”

He gets up off his stool. I don’t step away, we bump into each other and he trips back. Right on cue, as though he had it planned, he pulls out his cell phone and says to his girlfriend in the weeniest voice: “911?”

These people are fucking sick. You never call the cops unless it’s the worst emergency. You never get the State involved so that a fellow human being will be taken off in chains and locked up like an animal. These cowards came to erase my words and now they’re trying to fuck with my life. I get the testosterone rush and start to move in, but before I do a friend from work runs over and pulls me away. Thank fuck, because I would have put him in the hospital and my ability to practice law would be gone.

The audience has that deer in the headlights look. They can’t believe what just happened. This is supposed to be a literary event. The bar is so still that I can hear the telephone ring at the club next door. The safe move would be to sit down and play good boy, but the lower class fighter in me rises up and starts to read again. Not just reading, but raging against everything that disgusts me: creepy apathy, hipsters who get threatened by anyone who does more than talk about Japanese animation, liberals who criticize from the sidelines, insulated assholes who don’t think anything can touch them, Red State obnoxious stupidity and vampires who play progressive but are more establishment than the Upper East Side. I am in the blood and guts of the American literary tradition—swapping stories with Kerouac and Cassidy in heaven. Here I am in some fucking bar in Denver, Colorado, people looking at me like I’m a freak—the cops coming any second to take me away—but I won’t go gently into the American night. Too much is at stake. I got it tattooed on my arm and burned on my heart: FTM. Fuck The Man. In whatever form he takes.

The cops show up right when I’m diving into the tranny buttfuck sex club scene from The Last Stand of Mr. America. They come into the bar. I go over and stand by them. I’m going off so loud so that people across the street stop to see what’s going on:

SHE REACHES BACK AND SPREADS HER ASS CHEEKS APART FOR ME.!! HER BALLS HANG LIKE JEWELS BETWEEN HER THIN MUSCULAR LEGS!!THE BUTTJUICE RUNS DOWN MY FOREHEAD, WIPING MY CONSCIENCE CLEAN!!

The cop puts his hands on my arm: “WE’RE SHUTTING THIS DOWN! THIS NEEDS TO STOP!!”

They pull me outside and stand me up against the wall. I bum a smoke and listen to the jerk lie to the cops about how I tried to kill him. Zero bullshit, I think of Dean Moriarty as they charge me with Assault.

Leah Nieboer grew up in Iowa. She is poet, deep listener, interdisciplinary scholar, graduate of the Warren Wilson MFA Program for Writers, and PhD candidate in English at the University of Denver. Her first book, SOFT APOCALYPSE, was selected by Andrew Zawacki as the winner of the 2021 Georgia Poetry Prize and will be published in March 2023 (UGA Press).

Graham Foust’s most recent book is Embarrassments (Flood Editions, 2021). He lives in Colorado and works at the University of Denver.

Thanks to her own talent, fearlessness and good looks, a 17-year-old working-class British girl secures a recording contract. Between takes at her first studio session she looks up at the control booth and sees her manager jumping up and down with excitement and the technicians around her laughing. “Your feet, your feet,” the manager explains over the microphone.

Eric Baus is the author of How I Became a Hum (Octopus Books, 2019), The Tranquilized Tongue (City Lights, 2014) and other books. He teaches at Regis University and lives in Denver, Colorado.