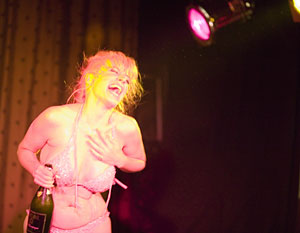 Cradled in The Slipper Room’s womb of a bar that glowed Amsterdam red, Miss Saturn, a go-go dancing hors d’oeuvre for the burlesque buffet, was puppeteer and marionette in her own body. In fifteen minutes, she flickered from awkward girl, unaware of the nature of sexiness (at one point she licks her armpit), to garish vixen who puts on sexiness with such absurdity that you have to laugh. After a yoga interlude, she begins her striptease by plopping onto the stage, tearing off sequined boots like a kid at the beach about to run into the ocean the first day of summer. It was smart, funny, paradoxical, and, sexual orientation be damned, it was hot.

As I set out to write this article, I had to ask myself: beyond the overt presentation of “sexiness,” what distinguishes burlesque from your standard boob-and-crotch fest at the local Organ Grinder?

What is consistent throughout burlesque’s legacy is its irreducibility as a transgressive system that defies both the natural and conventional by conflating fear and allure and corrupting the boundary that divides traditional notions of gender representation into the opposing poles of femininity and masculinity. But what does burlesque’s categorical destabilization of femininity and celebration of the monstrous mean in a time when one can earn a Master’s degree in Gender Politics? After all, this is not 1875. Or Des Moines, Iowa. 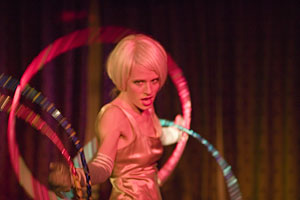 Miss Saturn at The Slipper Room

After my recent burlesque binge, it seems that the current scene in New York City resembles an amalgamation of its historical predecessors, a hybrid of the spectrum from the socially conscious, gender-bending performers who toyed with the absurd and displayed their talents to the down and dirty strippers who flaunted their flesh for the pleasure of an erect audience.

While burlesque in the late 1800s challenged woman’s role in society, this is hardly a divisive issue in the 21st century. The relevant questions in the wake of third wave feminism—when “feminism” itself is a dirty word—include: What does it mean to be a “real” woman? (As I write this I’m tempted to gag myself with half a box of tampons.) What is femininity anyway? Do these two concepts depend on one another for their own intelligibility? Must a woman be feminine in order to be sexy? Must one be “sexy” to be sexy?

Allow me to defer to the professionals, and a couple of amateurs. Miss Janice DeMilo from The Slipper Room, introduced as the quintessential figure of morality, portrayed the tightly-wound, nerdy school girl dressed in knee socks and thick glasses. After shushing the audience and perusing the books stacked onstage, Miss DeMilo became increasingly excited, transforming order into disorder by ripping her sign—”Library. Quiet Please.”—trashing the books, and tearing off her clothes. Adorably, she closed her act with a well-executed tap dance.

Miss Behaving, reigning champ of Galapagos Art Space’s Amateur Night, performed an updated rendition of early burlesque’s mockery of masculinity with her aggressive hip-hop routine, stripping off her black Adidas thug gear, abandoning traditional notions of feminine sexuality. Provoking both fear and allure, she was a preying mantis who’d screw you then kick your ass. The technique of combining danger/repulsion with invitation/attraction is a juxtaposition characteristic of early burlesque. Miss Dirty Diapers was the anti-heroine of Amateur Night with her rubber cleaning gloves and garbage bag costume, which, once ripped open, spilled trash. Instead of pasties and a g-string, she wore banana peels duct-taped to her breasts and crotch.

The big disappointment came from the Bowery’s Badass Burlesque. While I was expecting something shocking, for it was billed as the “Shameless Home of Psycho-Burlesque,” there was nothing “bad ass” about it. The night’s one real attempt at poking fun at itself came from Miss Rose Wood, a man dressed in fake female genitalia, who was “too wasted” to realize she had a condom stuck to her ass. The performance’s potential irony was undermined by its introduction, when The World Famous Bob forewarned us about her druggy friend, telling us to pretend that everything was normal. The only thing truly “trangressive” about the evening was that some of the performers did not wear g-strings. When Miss Bambi bent over, hairless and smeared with glitter, you could see her ovaries. Vagina shmagina—I’ve seen worse in fifth grade health class.

The most gender-bending performance was by The Slipper Room’s Tigger, “the man-woman of burlesque.” As Tigger’s character disrobed, he transformed from an ultra-femme, highly accessorized, perky woman to a hyper masculine, male jock in a wrestling singlet. His dancing evolved with his character, from giddy flitting to aggressive shadow-boxing and push-ups that defied gravity. He didn’t strip in a sexually suggestive way, but in the manner of an athlete after a meet, sitting on a bench in a locker room. He ended his number by jumping into the audience in his jock strap and roughly kissing a woman—his transformation complete.

The current scene’s most interesting characteristics, the genre’s ambiguity and self-referentiality, are also throwbacks to its earliest incarnations. Since the cooch dance and striptease did not appear until burlesque’s decline, performances relied on the humor and talent of its women as theatrical spectacles and not as mere sexual objects.

My favorite burlesque performers created compelling comedic characters who accomplished impressive feats of dexterity. I had the pleasure of seeing Miss Saturn perform at both The Slipper Room and in her own production, Hulapalooza, at Galapagos. Miss Saturn is never without a hoop, or twenty, which she wields with requisite gyrations the entire act. The removal of clothing, which does not always occur, is shocking not because of the resulting nudity, but because of the fact that she is simultaneously spinning several hoops in increasingly difficult patterns. Another performer at Hulapalooza, Harvest Moon, rolled, lit, and smoked a cigarette while hooping, pulling the paper out of her cleavage and tobacco from her hotpants. Instead of executing movements dictated by notions of “sexiness,” their gestures were shaped by their personas. The occasional removal of clothing and the performance of gender and sexuality were presented through this lens. Sexiness was secondary to theatrics. The result was the expression of a more innate and organic sexuality, which was all the more alluring.

If we insist on speaking in terms of labels, the performances at The Slipper Room and Hulapalooza deserve to be described as an erotic subset of dance-theater. Miss Bunny Love’s act criticizing America’s corruption by obsessive consumption and blind patriotism was a work of performance art. Miss Love, in a seventies denim jumpsuit, entered the stage chugging a Coke. She was handed a bag of McDonald’s from which she extracted two burgers. After a quick binge she spit out what she couldn’t swallow, then wiped her mouth with an American flag handkerchief retrieved from her cleavage. Pretending to vomit the flag into a bucket of water, she disrobed, then crudely washed herself with the flag rag. She ended the piece, fully nude, by covering her crotch with a Nixon mask, pasting the flag across her breasts, and raising her arms in two victorious peace signs.

I also had the opportunity to watch a video of a fundraising event by the dance-theater company Alexandra Beller/Dances. Beller’s production poked fun at the notion of categorization with the excessively descriptive titles: Tantric Yoga Burlesque, Drag King Femme Fatale Burlesque, German Expressionistic Avant Garde Burlesque, and, my favorite, Bored Whore Burlesque. In the latter piece, two bitter, jaded “Sisters of Ass” absently performed a gritty number while chewing gum and, I imagine, constructing a To Do list in their heads. Much like Miss Saturn’s puppeteer/marionette gesticulations, the bored whores often didn’t bother exerting themselves by involving their entire bodies to sex it up, but simply used their hands to jiggle their breasts and asses for the audience’s pleasure.

My conclusion about the current burlesque scene? I wonder if tying this article up in a sexy little sequined bow would do a disservice to an art form that defies categorization as a univocal genre. Although today’s scene would certainly give the audiences of early burlesque the vapors, I believe the burlesques of the two eras, a century and a half apart, are equivalent in their degree of insubordination. In a time when individuals are becoming increasingly disenchanted with the gender binary, one can only be truly transgressive by opting out of this neatly ordered system of identification altogether. Oh, and it was hot.

The Strength, Suppleness, and Beauty of a Body

The agadir—the collective granary—of music is made of songs and compositions for embodiment. Arooj Aftab, Julia Adolphe, and Layla McCalla are three musicians who contribute such music to the agadir, aiming to revive human life.