New Perspectives on an Old Adage 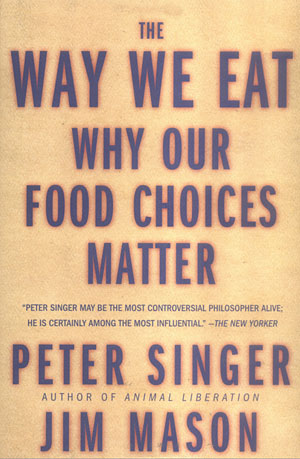 Two new books about food production in America—Peter Singer and Jim Mason’s The Way We Eat: Why Our Food Choices Matter (Rodale, 2006) and Michael Pollan’s The Omnivore’s Dilemma: A Natural History of Four Meals (The Penguin Press, 2006)—have recently been released, and those hoping to learn about why and how our food choices matter will find both excellent reading. Providing in-depth analyses of the ethical, political, economic, and environmental concerns related to food production, both books investigate these issues by tracing specific meals back to their origins.

The Way We Eat, co-authored by Singer, a professor of bioethics at Princeton University and Jim Mason, a journalist, attorney and animal-rights activist, is focused on issues of animal welfare and the ethics of deciding (or not deciding to eat meat). By contrast, The Omnivore’s Dilemma, written by Michael Pollan, a journalist specializing in environmental and ecological issues, offers a more wide-ranging analysis of the political and economic history of the American food industry and its various constituencies (conventional, big organic, small organic), the dangers of not pursuing an ecologically sustainable approach to agricultural and animal husbandry practices, and the reasons why America has come to rely on food production practices that are anything but sustainable.

Some will already be familiar with Pollan’s writing—and parts of his most recent book—from the New York Times Sunday Magazine, where he is a frequent contributor. Often referred to as “that guy who bought a cow and wrote about it,” Pollan is also the author of The Botany of Desire: A Plant’s Eye-View of the World, a professor of journalism at the University of California, Berkeley, and a master of making it hard to stop reading about things—”corn sex,” for instance (28)—that may at first appear to be of limited interest to a general reading public.

The book, which is divided into the four sections, offers first an introduction entitled “Our National Eating Disorder” that considers the lack of a “steadying culture of food” in America and the ways in which this leaves us “especially vulnerable to the blandishments of the food scientist and the marketer.” This is followed by an investigation of factory farms and corporate food production in section two, and by a similar journey through the steps of the food chain in big and small organic farms in the third. In the fourth and last section, entitled “Personal: The Forest,” the author discusses his experiences preparing a meal from ingredients almost exclusively hunted, gathered, and grown himself, going so far as to harvest his own salt from salt ponds in San Francisco’s south bay, an experiment that ultimately proves unsuccessful.

Pollan’s infectious curiosity—at one point he describes himself as an “ecological detective”—and lively writing style make just about every one of The Omnivore’s Dilemma’s four hundred and sixty four pages a fine read, although the first section of the book, devoted to a cultural, sociological, and economic genealogy of corn, is the most absorbing. Here, Pollan finds a rare balance between first person narrative and the relation of objective facts, combining the details of personal experience with a great deal of historical, botanical, and socio-economic information.

Having visited a corn and soybean farm in Iowa and followed the corn planting and harvesting process, Pollan tracks the journey and destination of the ninety thousand kernels that make up a single bushel of corn. The quest takes him from the farmland of Iowa to the pastures of a Western ranch, where Pollan buys his cow, to a confined animal feeding operation (CAFO), to a corn processing mill, and finally to a McDonald’s in California, where Pollan and his family share a meal that, when analyzed in terms of its carbon isotopes, is made up of a fairly substantial amount of corn.

Reviewing the atomic signature of a McDonald’s lunch to determine how much carbon in the meal came from corn, a procedure performed by a colleague of Pollan’s at Berkeley, reveals that: 100% of the soda, 78% of the milk shake, 65% of the salad dressing, 56 % of the chicken nuggets, 52% of the cheeseburger, and 23% of the French fries are actually corn. All of which leads Todd Dawson, the Berkeley biologist who assisted Pollan with this research, to comment, “when you look at the isotope ratios, we North Americans look like corn chips with legs.” Of course, what makes all of this industrial corn so plentiful and inexpensive is oil: Pollan estimates that it requires a third of a gallon of oil to produce one bushel.

The second section, in which Pollan discusses the origins of two meals—one purchased entirely at Whole Foods and the other derived (almost) entirely from food grown at a small organic family farm—raises fascinating and important issues about the rapidly growing organic food industry, which, in light of Walmart’s recent announcement that it will begin selling organic produce, is all the more pressing. The argument that organic farming is more environmentally safe since it eschews the use of pesticides is incontrovertible, but the argument that conventional farming’s overall impact on the environment may be less harmful than buying locally grown conventionally raised produce is not. Pollan clearly lays out the complicated calculus involved in our food buying choices and ultimately finds not only that his “industrial organic meal is nearly as drenched in fossil fuel as its conventional counterpart,” but the existence of organic factory farms where cows are packed as tightly together as in conventional factory farms and fed, not grass, but a steady diet of organic corn.

The Way We Eat offers a more in-depth look at practices not only at animal factory farms, but at factory slaughterhouses, as well as important statistics related to American food choices and world hunger. For those debating the ethics of eating animal—based products, there is also a collection of various arguments for and against. The book’s bias is clear: it is vastly preferable to follow a vegan diet in order to protect the environment and contribute to the end of hunger globally. If following a vegan regime is not a possibility, the authors recommend a vegetarian diet, and strongly discourage even “conscienscious omnivorism” because of its environmental and ethical problems.

Through a profile of three families—the “conventional” American family that shops at Walmart, the “conscientious omnivore” family that shops at Trader Joe’s, and the vegan family that shops at Whole Foods—Singer and Mason trace the genealogy of the various foods that these families eat. Providing incredibly well-researched information and factual details in areas that are often very difficult to cover as a result of the factory food industry’s general nondisclosure policies, Singer and Mason are intrepid in their efforts to reveal the practices of a highly secretive industry. When told that they cannot visit an industrial turkey farm, they apply for jobs as turkey inseminators, a job that is now required because factory farmed turkeys—fed and bred to promote maximal breast size—can no longer reproduce naturally as a result of physiological constraints (a euphemistic way of saying two turkeys can no longer reach one another’s reproductive organs).

It is unfortunate that Singer and Mason, in advocating for a vegan diet, end up appearing to be fairly insensitive to the ways in which economic issues relate to food buying decisions. Their writing style literally changes when they being profiling the families who have the financial means to purchase organic products. Though their overall argument that we should all be eating lower on the food chain is a very good one and applies equally to individuals who shop at Walmart as to those who shop at Whole Foods, some readers may find a class bias in the book that is difficult to see beyond.

Ultimately, both books are significant achievements, and depending on your aesthetic and gustatory proclivities, one will certainly provide stimulating and thought-provoking reads.

Richard Manning’s Against the Grain: How Agriculture Has Hijacked Civilization

My conversation with Devers underscored the importance of collecting as a means of rectifying history. “It seems like a nostalgic pursuit, but the more energy in the market around certain books, the more likely it gets onto syllabus and back into print.”

Amassed by the artist Hannah Darabi, this oversized photobook casts a broadly curated lens on the sociopolitical turmoil induced by Iran’s Islamic revolution through a look at the Tehran’s underground publishing scene. Including personal recollections, first-hand accounts from publishers and photographers, and invaluable photographic documentation of the books and the city, Darabi and researcher Chowra Makaremi reconstruct this important moment in Iran’s history.

T.C. Cannon: At the Edge of America

T.C. (Tommy Wayne) Cannon painted Native American portraits outside against skies with potato-shaped clouds and in interiors against “magical circle” wallpaper patterns with unlikely color combinations. He transformed the garments and neckwear of his subjects to bring out the gravitas from their faces and posture, creating jolting, psychedelic yet monumental tributes, political in their mere existence and as solid and American as Mount Rushmore.