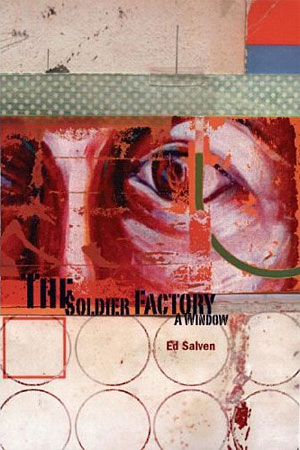 Salven went through Fort Ord, the now-defunct barracks in northern California, in 1968, after he was drafted at 20 years old. He revisited the fort several years after it was decommissioned, and toured the empty grounds. The return was like finding a ghost town: the men and women of the barracks were gone, but even before that, as Salven suggests, the soldier factory had turned them into bodies without souls. The barracks became a grave, “already turning to dust before me.”

The book is accompanied by artwork that the author discovered after he had completed the text, a task performed in “a day and a night,” according to the book’s preface. The paintings, of anonymous soldiers, were done by students from a university that operated a facility on the grounds. They were hung outdoors, the canvases weather-beaten and frayed, the acrylic faded. But the full-color reproductions in the book, from Salven’s photos, are richly saturated.

The passages are not poems, though they are written in verse. The text is most poetic when zoomed in on one character—”Charlie,” for example (the name of a fellow soldier, not the enemy, though one gets the author’s message that we’re all really the same). Charlie had bit his lower lip so much while shooting at the enemy that a permanent sore developed, “tumorlike”; having bitten his own lip, he’s tasted the blood that he spilled.

Not everything in the book sticks, but Salven’s memory-dredging and contradictory reflections are impressive. It is difficult to separate the writer’s ironic cooption of military axioms from his acceptance of them: the “spoiled self indulgent youth,” who leave behind their civilian lives to find the glory of serving the group. But Salven makes clear that in many cases these kids would lose all hope of ambition and identity, and like ex-cons, couldn’t go back out into the world the same person.

Suicidal tendency evidently ran rampant in the barracks; at one point a young soldier’s attempt to kill himself by jumping out of a window is foiled when he lands on two MPs, who assume they’re being jumped, and so beat him and send him to the stockade. In another instance, a young soldier attempting to escape the stockade is shot in the back by a boy his age; the executioner is docked $0.50 for the cartridge.

In musing about the sacrifice of young people, and the mechanization of soldiery for the sake of what continues to be called freedom, Salven writes: “Maybe if we stop butchering our youth…the world would be worse. Maybe dying for a mirage is better than dying for a desert.” Is this intended to give the fallen soldiers’ family and comrades some kind of comfort? Or is Salven trying to convince himself that all the soldiers he knew may not have died in total vain? Here the book captures the ambiguity of nostalgia.

Descriptive terms and phrases, such as olive drab, are repeated dozens of times to underscore the uniformity. Soldiers, when described in scenes out on the town, stand out as “big-eared kids”—big-eared kids who would then travel halfway around the world to commit some serious killing, and then come back home “to work in shoe stores, fast food places, gas stations in a matter of months, weeks, days, hours.” This compression of time and space brings the Vietnam War as close to home as this reader has been made to see it. The thought of a combat veteran jumping out of the jungle onto a helicopter, catching a plane to California and pumping gas, all in a single weekend, emphasizes the mechanization of people into soldiers into people who will always be soldiers.

All of the combat stories of those who served are told from the point of view of their return. “And the memories,” he writes, “blow forever through the empty barracks of the mind.”

The Book of Crow

The unfinished, epic series of narrative poems, Crow: from the Life and Songs of Crow, served as a repository for Ted Hughes’s grieving and guilt. As a locus of bereavement, the Crow poems made intuitive sense as a shadow text for Max Porter’s Grief is the Thing with Feathers and, here, for Lyle Rexer’s picaresque that attempts to make sense of the past two years. This excerpt comes from two short stories, “The Last of Crow” and “Crow in the Time of Cholera.” Playful absurdity emerges with the crow’s-eye view, and there’s much to be enjoyed in the trickster experience of corvid covid.