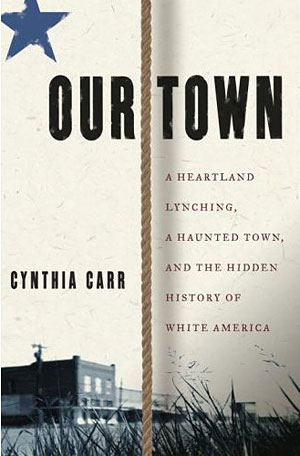 On the night of August 8, 1930, three young black men incarcerated for robbing and killing a white man and raping a white woman were dragged from jail in the small town of Marion, Indiana. Two were brutalized, killed and hung from a tree in the center of the town square and the third was beaten but spared as the better part of the town’s white population watched. A photograph taken that night has become one of the emblematic images of white hate and Ku Klux Klan viciousness.

Author Cynthia Carr, who later became an art writer for the Village Voice comes from Marion. Though as a child she knew that a lynching had happened in her town, she was a young woman before she saw this picture and discovered that her grandfather was a member of the KKK. For Our Town: A Heartland Lynching, a Haunted Town and the Hidden History of White America (Crown), Carr has returned to Marion, years after making these discoveries, to attempt to uncover the real story of that night in August and in so doing, unravel the complex of guilt, anger and secrecy that makes up America’s racial consciousness. And maybe to understand her grandfather’s secret as well.

The book walks a line between memoir and historical inquiry. Carr’s voice choruses along with the crowd of people she interviews—as well it should, these are people she grew up with, of whom she is part. She investigates the history of the lynching and, consequently, her own history. Her feelings on the subject become as much evidence as those of the men and women she meets who saw the thing in person. Marion appears to be a polite place, where being tightlipped is the same as being nice, but when prodded, the silence breaks through to intense guilt, disgust, righteousness, and shame, whether the lynching was seen or not. The spectre of those bodies hung in trees is such a strong symbol, that, it seems, to be anywhere near a whiff of a rumor of a long-gone rope is to be unclean—or scarred.

So many of the book’s revelations lie in details, which are, as ever, confused—whether the sheriff threw the jail keys to the mob, whether and how the lynch victims were involved with Mary Ball, the alleged rape victim, while pinning blame is pointedly avoided; the real goal is honest and clear exploration, or perhaps Carr simply doesn’t want to stir up the old blame and shame issue, as it already lies heavy on the town. She seems to be trying to get down to a kind of truth that has to do with something more fundamentally entrenched in all the people of Marion. What that truth is, we never quite understand—as we never understand her grandfather’s secret. It is the journey of investigation, clearing away the fog of secrecy to find basically unreconcilable contradictions, perhaps is the only way to look at the thing squarely, like life—without answers, but never without reasons.

The lifeblood of Our Town is in dozens of interviews, from octogenarians who saw the event, to Klansmen who still dot the communities of Indiana. The most dramatic witness must be James Cameron, the third man (boy, really, he was seventeen at the time) who escaped the lynching and who dedicated his life to speaking out about his experience and to a museum he calls America’s Black Holocaust Museum. Cameron comes off as something of a fanatic, even tragic figure, but his account is certainly one of the most vivid and clear in the book. The truth, of course, is not quite so vivid or simple; the truth, not unusually, does not come out, in the end. How can it? The voices of Carr’s witnesses chorus, sometimes at a deafening volume, as each of their stories criss cross, contradict and corroborate each other. Fascinatingly Carr exposes, rather than a straightforward structure of racism, the sticky and impossible web that perhaps it actually is.

One of the more incredible and telling aspects of Our Town, in terms of what it says about extreme racism today, are the scenes and interviews Carr describes with the modern KKK members of Marion and greater Indiana. After the accounts of the KKK of the past—a ubiquitous club, claiming members of the most respected groups of Indianans, thousands strong, influencing politics so much that they “ran Indiana,” and made it known—the present day ‘Kluxers,’ as she calls them, are downright marginal. The tables have turned, at least in their minds. The major complaint the modern Kluxers have (most of whom are unemployed, undereducated and poverty stricken) is that they are oppressed by a system that favors blacks, from employment to college admissions. In Carr’s many interactions with them, it is evident, finally, that the Klan and racism are merely a comfort for men who have no power, no voice, and a whole lot of anger. They scream and flail against a phantom, grateful that there is something to rail against. Their only power lies in the power of the name of the Ku Klux Klan; the modern Klan is limping and neutered, hiding behind images of atrocities over sixty years past.

In the end, Our Town is about the maze of emotion, memory, unresolved guilt and unresolved pain that festers beneath the polite or actively amnesiac consciousness of race in Marion and—inferentially—America as a whole. Memory being one of her greatest allies and most frustrating foes. The interviews that make up some of the most compelling and mysterious parts of this book require a constant interpretation and delicate extraction of information that is never entirely reliable. But the snippets of information Carr is able to extract slowly form a patchwork picture of the event, and what the patchwork’s form says about the dynamic of shame in a small town. She tells us in the beginning that her grandfather was illegitimate and never knew his father, even though his father lived not far from him in the town, for many years. The whole town knew or suspected it, he was just never told. This is their attitude about the lynching; everyone knows, but no one is willing to acknowledge. By the end of the book, however (her investigation takes place over a space of nearly a decade), the town goes through a series of ‘reconciliation’ days and public atonements. These events serve to place the lynching in the public forum, and do something to put the lynching to rest, but, as one black citizen of Marion says, the town will be held down by August 8, 1930, “until those who were involved with that lynching are dead and gone off the face of this earth.”

In mid-June, James Cameron, last known survivor of a lynching and one of the very last of those involved with the Marion lynching died at 92. His obituary in the Marion Chronicle-Tribune is a testament to how much the town has changed even since Carr began revisiting its troubled past. Cameron, and his involvement with the lynchings, are written of explicitly and with reverence. The photos show white and black members of the community attending the funeral. Whether his death indicates Marion’s liberation from that dark part of its past will only be told in time, but another article the same paper is a story in which Carl Deeter, nephew of one of the men who was allegedly killed by the lynch victims, is interviewed about Cameron at his death. Notes of bitterness ring throughout, Deeter resenting the respect the town holds for Cameron and his exoneration by the state for a crime of which he was questionably convicted. The article concludes with a quote from Deeter indicating Cameron’s ‘later life’ was admirable, but the reverent obituary side by side with an interview mired in the angry annals of history is perhaps a better picture of what is to come for Marion. A facing up to the ugliness that is already there—perhaps actively changing some things, but if nothing else an end of denial. Which is all Carr asks, in the book; clarification and honesty. The only question remaining, then, is whether that’s enough to help bring about concrete changes in the infrastructure of racism, even as it tries to hide behind equal opportunity laws and the technical abolishment of segregation. These new efforts don’t hurt, though acknowledgement is only half the battle.

Reframed: The Woman in the Window

Throughout the Dulwich Picture Gallery’s wide-ranging Reframed: The Woman in the Window, thoughtfully curated by Jennifer Sliwka, we are reminded of that binary—who has agency and who may not?—and the roles that we then assume as viewers of the women represented.