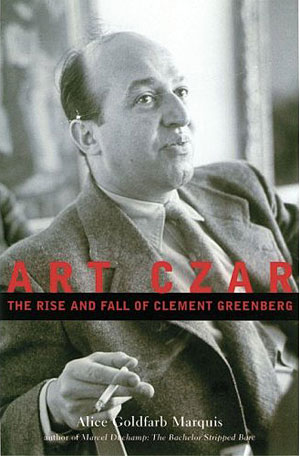 When Clement Greenberg was five years old, he beat a goose to death with a shovel handle. Near the end of his life, Greenberg explained that he had killed the bird not out of cruelty but out of fear. This incident was a portent, quipped the New Yorker’s Adam Gopnik: “The slow escalation in targets, the growing taste for blood, the rise to bigger and uglier assaults…The die is cast; the boy will become an art critic.”

The anecdote and Gopnik’s response are retold in Art Czar, Alice Goldfarb Marquis’ masterful biography of Greenberg (1909-1994). With a rare combination of meticulous scholarship and crisp, vivid prose, Marquis has astutely constructed a complex, highly nuanced portrait of America’s most controversial art critic.

Greenberg’s tastes were more innately personal than theoretical. His great affinity for Jackson Pollock, whom Greenberg almost single-handedly turned into a star, was not merely critical, Marquis points out. While on the surface the small-town, unevenly educated Pollock was the antithesis to the urban sophisticate Greenberg, both men possessed “an undercurrent of violence,” drank excessively, and struggled with forming stable intimate relationships.

As a boy and young man growing up in the Bronx, Greenberg “may have been difficult to raise,” Marquis writes with deliberate, comical understatement. Indeed, as a young man, Greenberg was violently resentful of his Lithuanian Jewish parents. They harbored what Greenberg viewed as a contemptible respect for close family ties, economic stability and academic success. Greenberg began to “make himself into himself” as a student in the humanities at Syracuse University, yet after college he floundered, bemoaning the wasting away of his self-proclaimed artistic and literary genius. While Marquis makes it clear that “genius” was perhaps not the most apposite description for Greenberg’s artistic efforts, Greenberg was a practicing painter and poet for some years; as a young man he told his father that his greatest wish was to paint like Norman Rockwell—an intriguing bit of information for those familiar with his (in)famous 1939 essay, “Avant-Garde and Kitsch,” in which he describes Rockwell’s images as corrupting “products of American capitalism” and prime examples of kitsch.

Juxtapositions of personal unhappiness and professional success would follow the critic throughout his life. (At 25, for example, he published his first story in Esquire, then abandoned his first wife and newborn son.) These were offset by his ever-present emotional imbalance: Greenberg suffered intermittent, deep depressions and heavily self-medicated with alcohol and prescription drugs.

Marquis also makes it clear that the critic’s bombastic, “cocksure” writing style was more than matched by his abrasive and often abusive personality. He “had a sadistic streak a mile wide,” according to one of his former girlfriends, who Greenberg terrorized one evening as they walked down Park Avenue by picking up a dead mouse from the gutter and dangling it in front of her face.

It is to Marquis’ credit that she provides such vivid details without exploiting them. She could have easily constructed a sensationalistic, reductive portrait of Greenberg but instead forms a seamless interweaving of his ideas, analysis of the periods through which he lived and the personalities surrounding (and avoiding) him. Marquis gracefully shifts between these layers, her narrative panning in, out and around her subjects in methodical yet vivid rhythms. Some of the book’s strongest sections illuminate the relationship between Greenberg’s criticism and the cultural history of his era: in fascinating detail, Marquis unravels how the CIA and State Department’s Office of Cultural Affairs used abstract art as a weapon during the Cold War.

Like many of Greenberg’s essays, written as debate and dialogue with critics such as Dwight Macdonald (“Avant-Garde and Kitsch” started as an inspired response to a Macdonald essay on Soviet cinema), Marquis’ Art Czar is a quietly forceful response to Greenberg biographies that have come before, most notably Florence Rubenfeld’s vilifying Clement Greenberg: A Life (1998). Marquis’ biography is a work of criticism itself—not only of other biographies, but of our current cultural climate, in which the critic as “dilettante connoisseur” has all but disappeared, along with the thriving public intellectual debate once roused by publications such as Partisan Review, The Masses and The Dial. Yet for Marquis, Greenberg’s criticism possesses a permanence and relevance that cannot be shaken: “a thoughtful alternative to the ironic, anything-goes sensations purveyed in the current milieu, not only by dealers but also by museums and academics.”

“One’s life is supposed to be an open book,” Greenberg told John O’Brian, the editor of his collected essays. “I’d prefer to open it myself.” He never did. Almost ten years after Greenberg’s death, we are lucky that Marquis has re-awakened his life and legacy with such depth of insight and inquiry.

Joscelyn Jurich is a writer living in Brooklyn.