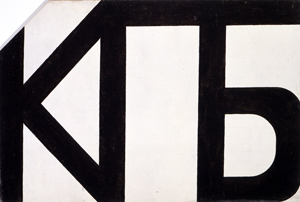 There is a story Ronald Feldman likes to tell that serves to contextualize the exhibition recently on view at his Mercer Street gallery. While visiting the Soviet architectural team Brodsky and Utkin in their native Russia, Feldman and his associates dined at an upscale restaurant whose interior the two architects had designed. When the check came, Brodsky and Utkin insisted that they pay for the dinner. Knowing that the two architects had been living for many years on the brink of poverty, and that such a lavish expenditure was well beyond their coffers, Feldman declined their goodwill and an argument ensued. Finally, Alexander Brodsky laid his hands down firmly on the table. “You don’t understand,” he said, “we were never compensated for our work here. They pay us in meals.”

Artists against the State: Perestroika Revisited, which closes June 24 at Feldman Fine Arts, provides an extensive look at the irony, ingenuity, and desperation reflected in Soviet nonconformist art up to and during Perestroika. The prevailing sentiment expressed by the fifty-some artists exhibited in this show lingers somewhere between exuberance and exasperation—exuberance for the possibilities promised by Western visual modes largely suppressed under Stalin and Khrushchev, and exasperation for the stifling conditions under which non-conformist Soviet artists were forced to work. Taken as a whole, “Perestroika Revisited” advances the striking notion that Modernist principles of art-making, when set within the confines of political tyranny, are a force both liberating to the human spirit and disruptive to systems of state control. 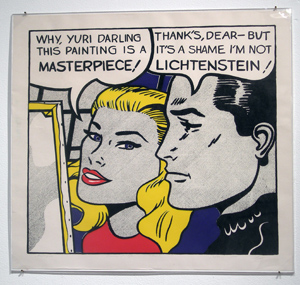 As if to set the standard by which art of the place and period is to be gauged, the show opens with a work of Soviet-sanctioned Socialist Realism. Wrought in a plain, illustrative style and depicting a utopian vision of peasant camaraderie and agricultural bounty, “The Collective Farm” (painted by an unknown artist) is the type of work one might expect to find in a Soviet federal building. Gazing at the work, one cannot help but experience the strange irony that its cheerful, almost kitsch glossing of an idyllic agrarian lifestyle would be almost as easily at home in the living room of an American bourgeois. It is just this kind of image that many of the artists featured in Perestroika Revisited would have been resigned to creating in their official capacities as state-approved artists. Instead we find these non-conformist painters, sculptors, and installation artists infusing saccharine canvases and counter-propagandistic works with outrageous irony or irreverent personal meaning in an effort to subvert the totalitarian associations by which the Socialist Realist and Soviet mass-cultural modes are bound.

Ilya Kabakov’s “Landscape with House” is part of a larger installation originally exhibited by Feldman in 1990 entitled “He Lost His Mind, Undressed, Ran Away Naked.” Here, articles of clothing have been pinned to the surface of a vaguely impressionistic landscape, as though their truant wearer had suddenly vanished and left them hanging in mid-air. The work’s soft rolling hills cannot help but reference the stylistic tyranny from which the artist wishes to emancipate himself; but they are also suggestive of the utopian bower in which he might very well have lingered were the promises of socialist ideology less vacuous. This interpolation of desolation and sublimity is a theme repeated by several of the artists in the exhibit. Revealed is the shell shock of living in a nation whose ideological principles proved gravely resistant to practical deployment.

On the façades of many Soviet buildings, plaster columns were painted to resemble bronze—a national self-delusion worthy of Potemkin and Catherine. In Grisha Bruskin’s “The Birth of a Hero,” bronze statuettes are painted to resemble plaster. Such inverted alchemy might be seen as symbolic of the greater circumstances surrounding non-conformist Soviet art—a movement that was forced to disseminate its treasures surreptitiously, beneath the ever-present fear of state persecution. Not surprisingly, several works directly tackle the anxiety perpetuated by incessant state monitoring. In Leonid Lamm’s “Assembly Hall, Butyrka Prison, Russia” the artist hauntingly depicts the interior of the prison to which he was confined after attempting to apply for an exit visa. Sergei Bugaev’s “Banya (Bath)” refers to the public space of the bathhouse, which, during the Soviet reign, was one of the few areas of the public sphere in which one could converse with relative freedom. Bugaev’s work also pays homage to the eponymous “Steam Bath Exhibition,” which, following the liberalization permitted by Perestroika, was held in the space where Stalin had been known to take his sauna. Formerly, such shows had been consigned to private apartments, or to clandestine wilderness locations. Such was the case with the now infamous “Bulldozer Exhibition” of 1974, whose name is taken from the response it provoked from the Soviet government who destroyed the exhibit with KGB bulldozers.

In a radical example of cross-cultural quotation, Komar & Melamid (key figures in the “Bulldozer Exhibition”) and Yuri Albert (a lesser-known Moscow nonconformist painter) have taken to directly appropriating the imagery of Western art movements. In “Post-Art No. 1 (Warhol)” Komar & Melamid have duplicated Warhol’s famous Campbell’s Tomato Soup can and then burned the painting in several places, thus satirically ascribing greater historical value to the work. In Yuri Albert’s “Masterpiece,” the artist has created a Lichtenstein look-alike in which the woman in the painting proclaims the work “a masterpiece” while her handsome suitor laments: “but it’s a shame I’m not Lichtenstein.” In both works, the artists manage to transform a lingering envy for the expressive freedom of prominent Western artists into biting critiques of the often outrageous monetary value attributed to so-called masterpieces. The simple fact that the imagery here is derived from unsanctioned sources lends these works a confrontational, non-conformist agenda that concedes the necessity of creative freedom even while it scrutinizes the mythologizing tendencies of the global art trade.

It is fascinating to look at the works in Perestroika Revisited and consider their inherent radicalism. Certainly avant-gardists from all eras have considered their work “radical” from a formalistic perspective. But imagine a scenario in which the reversion to “formalism” itself is an action subject to state reprimand. In “KGB,” Komar & Melamid depict a formally concise abstraction of those most ominous Cyrillic initials. The work transgresses state sanction at the same time that it identifies the operating body responsible for enforcing repression. Thus, the operating body itself is associated with the transgression, and the hypocrisy of government-mediated cultural production is stripped bare, like so much bronze paint from a plaster façade. This painting is one of several works smuggled out of Russia back in 1976 for an exhibition at Feldman Gallery. Kudos to Feldman for continuing to shed light on this underexposed art historical movement.