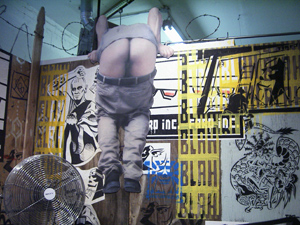 A view of Dan Witz’s ass he pasted in the OPEN AIR show as an FU to a young street artist who disrespected his work. Also pictured are Skewville’s rollered BLAH BLAHs and Tiki-J’s stencils.

For four days, curators Alyssa Natches and Lou Auguste welcomed a slew of street artists to paste, paint and stencil to their heart’s desire on plywood walls constructed in the rented Stay Gold gallery space on Brooklyn’s Grand Street. Tiki Jay from LA was in town for his first New York showing, while New York diehards Michael De Feo, Dan Witz, the artistic pair Skewville, and FAILE—among others—packed the space to capacity.

Street art is not without its tensions, and when one of Witz’s pieces near the entrance of the Open Air show was disrespected by some young upstart who painted over it, Witz created the show’s pièce de la resistance—a large photographic image of himself mooning the room. Hanging ominously at the top edge of a plywood wall with his legs dangling, it underscores his notoriety in an art scene that thrives on illegality and masculine bravado.

In such aggressive and hyper-graphic company, Dark Cloud is a welcome surprise. His works are among the few pieces that go against the grain and downshift the adrenaline to take contemplative forays by means of his iconic, brain-like clouds that drip and float on fields of color. If Dark Cloud’s paintings are the poetic interludes of the show, it is the Skewville who visually tie together the hallucinatory frenzy of visuals that stack the show with ocular bling. From wooden fire hydrants constructed on the gallery walls to rollered block letters that veil underlying works, their quick-witted splashes include an orange painted circuit box with an upturned metal arrow, camouflaging itself in the “VIP Collectors” area—a makeshift corridor hidden behind a padlocked chain link gate. Consisting of small panels and portable pieces, the Collectors corridor comes across as both a snide joke about the collectability of street art and the artists’ “who cares” attitude towards gallery respectability.

Famous names abound in the exhibit. Michael De Feo is looking as good as ever in his one part guerrilla, two parts Pop Art stylings. Tiki Jay (aka Tiki-J) is probably one of the best stencil artists around but his tiki-inspired iconography looks a little out of place in this show. Only his signature Easter Island images fashioned into concrete sculptures are perfectly suited to hula with his East Coast brethren.

While the established names dominate, there were a few unknowns making their own small contributions. One Egyptian kid with attitude, aptly named Pharoah, added his own small metallic Arabic tag colliding Kufic script with street calligraphy.

Coinciding with the show is the launch of the new film, “Open Air,” a twenty-minute documentary by Natches and Auguste. It’s a straightforward romp through the LA and New York street art scene, with the artists themselves narrating their story. As a primer on the world of street art, it may disappoint some passionate die-hards for whom the documentary is not long enough or does not delve deeper into the malleable world of throw ups and tags. More intellectually driven than hip hop graffiti and less aggressive than gangland tags, street art is proving to be popular with restless artists uninterested in the traditional gallery circuit.

Comfortable in the neighborhoods dominated by art-volk and hipsters, street art still has an eager audience. Filled with recognizable images from past incarnations—whether on Elizabeth Street in Manhattan or in Brooklyn’s East Williamsburg—Open Air is a welcome window into the pulse of today’s clever street art. After it comes down, I hope Auguste and Natches will consider more shows to chart the state of the scene. In an art form that thrives on flux, each new exhibition would promise the surprises and vibrant energy of Open Air.