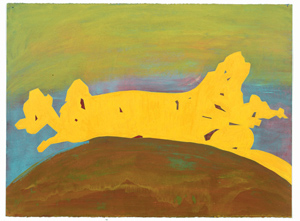 Now that the possibility of being avant-garde is either a pipe dream or one more example of our sad need for spectacle, models of progress are heavily contested, and the withering away of craft of any and all kinds has become a predictable component of much contemporary art, might not abstract artists for whom drawing is an essential part of their practice be defined as radical Luddites? After all, drawing, or so the critical argument goes, involves the hand, and the hand is no longer necessary to painting. The hand is evidence of craft, which, as any forward thinking individual—whether neo-formalist or neo-Marxist—knows, is a holdover from those bad old days of bourgeois values. Embedded within the adamant prohibitions against drawing is the belief that both inscription and description are old-fashioned. At best, the syntax one needs to learn, in order to master such art historical genres as landscape, portraiture, battle scenes, and still life, is obsolete, akin to a typewriter gathering dust in the window of a pawnshop.

And yet, in the midst of all the ideological arguments mounted against drawing, in every generation since the death of Jackson Pollock there have been determined individuals who have made drawing an important factor of their practice. Thus, one could divide abstract artists into two distinct groups, those who draw (Cy Twombly, Brice Marden) and those who don’t (Frank Stella, Joseph Marioni). The former rejected the ideological position that drawing was obsolete, while the latter group aligned themselves with formalism’s proscriptions against drawing. It takes a lot of conviction to make drawing an integral part of one’s practice, but it takes more than conviction to make it fresh, as well as to jettison all the tropes that might be deemed retrograde.

Thomas Nozkowski’s exhibition of paintings on paper, drawings, and prints could be taken as the latest installment in the ongoing argument about drawing. I should disclose that “Ing Grish Suite,” a group of twenty-five black-and-white ink drawings, was done in response to a manuscript of my poems, Ing Grish; and that some of them appear in the book. I feel that this neither disqualifies nor qualifies me as someone who can write about the work. However objective we all claim to be, we are all partisans; the point is to try to be more faithful to the work rather than to any ideology.

Nozkowski’s practice is based on drawing in paint in ways that neither emphasize nor efface the hand. The formal issue he repeatedly returns to is the figure/ground relationship, each time finding a way to manifest the bond as one of both paradox and inextricability. He utilizes patterns, broken grids, and all the conventions we associate with genre painting (landscape, portraiture) and cartoons (head-like shape and figural allusion) to arrive at a place where the logic of the work supersedes all the received wisdom he has deliberately put into play. Without fanfare, he melds playfulness and innovation with a vast knowledge of art, architecture, and film.

In “Untitled (Q14)” (2002), a large yellow shape lies on a burnt sienna mound, while rising behind them is a ground that modulates from purple to green. The inspiration for the yellow shape could be a mythical animal, a scholar’s rock, or a vision of a Willem de Kooning bronze toppled and melted by a bomb blast, but on a deeper sense the source doesn’t matter. Is the reddish-brown mound a hill, the curve of the earth (is this a sly comment on Carroll Dunham’s compositions?) or the top of an even larger beast’s head? Is the modulated purple to green ground a landscape or sky? The relationship of the three things in “Untitled (Q14)” keeps changing, as does our reading of them. The figure/ground relationship is dynamic, rather than static.

Nozkowski renews Pollock’s legacy and makes his own at the same time. Despite the intimate scale of his work, he keeps our eye and intelligence moving; it is a state of engagement that few artists of any generation are able to achieve. Nozkowski’s drawings and other works on paper form a distinct body of work within his oeuvre. It is something he shares with artists such as Eva Hesse, Jasper Johns, Brice Marden, and Richard Artschwager, as well as his slightly younger contemporaries, Catherine Murphy and Bill Jensen. Jonathan Lasker and James Siena have been inspired and influenced by his example.

Nozkowski’s capaciousness is unrivaled. He has made drawings using a ballpoint pen (a way to deny touch), colored pencils, and ink, as well as works on paper in acrylic and oil. This show is the tip of the tip of the iceberg. That there isn’t a full length monograph devoted to Nozkowski’s drawings in all their breadth is just one of the art world’s many egregious oversights. He is a contemporary master who has yet to receive his due.

Can art change the world? American philosopher and educational reformer John Dewey (1859 – 1952) certainly thought so. Dewey's progressive politics and their relationship to art, more specifically how they illustrate social practice art as an aesthetic experience, are the focus of Chicago-based curator Mary Jane Jacob's new book, Dewey for Artists.