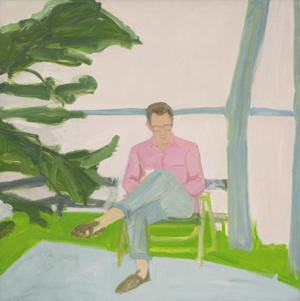 I remember going to a museum once with an undergraduate painting class and seeing an Alex Katz cut-out for the first time. It was a freestanding figure, painted on a crudely jig-sawed piece of wood, of a man in a suit. My classmates and I were into Georg Baselitz; we thought the Katz was the dumbest piece of art we’d ever seen. It reminded us of somebody’s dad. Our professor walked by and stood up for it: “You guys don’t know it, but this was a really tough gesture when he made it,” she said. I’m sure she felt frustrated, like someone trying to explain to an adolescent that jazz was really the first kind of punk rock.

Now everyone seems to think Alex Katz’s paintings are at least cool, if not great. The show of his work from the sixties at PaceWildenstein exudes an aura of supreme confidence, and rightly so: Katz is a huge component of the way a lot of figurative paintings look today. His casual portraits of intimates and art-world notables get updated in Elizabeth Peyton’s work. His reductive treatment of the landscape has informed a lot of interesting painters, like Cameron Martin and Maureen Gallace. And artists whose work doesn’t look anything like Katz’s have sometimes just appropriated his attitude—a relaxed blankness that veers from blasé to antagonistic.

An artist in the latter camp is Richard Prince, who interviewed Katz in 1991 for the Journal of Contemporary Art. Their exchange, an aphoristic gold mine, has Prince firing off a barrage of near non-sequiturs at the imperturbable Katz:

Prince: Your work has been described as undeniably Katz. Saying nothing and everything. Enforced ambiguity. Faceless mannequin. Central casting. I mean what kind of man reads Alex Katz?

Katz: I make art for all people. However, I have difficulty reaching semi-intellectuals.

Throughout the interview Prince makes some pointed quips about the latent creepiness of Katz’ anodyne depictions of leisure and comfort:

Prince: I must have read ten reviews of your “portraits” show in North Carolina and the journalists all started off with the same “all surface.” Do you ever wish just one of them would say something like “all serial killers” or is that “beefing up the meaning”?

The reading of Katz as an art-world David Lynch, whose opaque surfaces conceal displaced trauma, is responsible for a lot of his appeal to a generation of artists raised on abjection as a primary critical concept. It’s a lot easier to like him as a wry satirist of the leisure class than as a guy who enjoys, then paints, cocktail parties and the ballet.

Plenty of artists have employed deadpan reduction and an amateur-like technique to express precisely the ambivalence and alienation that Prince half-jokingly attributes to Katz. A painting by Luc Tuymans sets up a dissonance between an ostensible subject and its repressed psychological significance: two figures strolling in a bucolic landscape are most likely Nazis; an innocuous portrait probably does depict a serial killer. In Katz, the formula is simpler but also more difficult: there’s nothing alienated about his paintings, and rather than deciphering an encrypted iconography, the viewer has to confront the artist’s complete emotional and formal candor.

It helps to remember that the backdrop of Katz’s practice, especially the works from the ’60s, was the hegemony of the New York School. If Katz is a subversive painter, he gets the title through his negation of the abstract expressionist values of existential depth and heroic struggle. Dave Hickey said in a lecture once that what contemporary viewers first noticed about a Mark Rothko painting wasn’t the luminous quality of his color; it was the fact that it didn’t have a figure in it. Similarly, what viewers must have noticed about a Katz painting was that it did, but in a decidedly new spirit. Katz’s frank simplicity was and is a bracing statement of unambivalent pleasure.

Let's get into Joe Zucker's time machine. 100-Foot-Long Piece (1968-1969) is our point of departure, but Zucker brings us up to date with nine acrylic-cotton pieces from 2019. The show is not exactly a retrospective, but enough of one: nine gestural drawings in India ink from 1964 and two vitrines stuffed with miscellanea, including Zucker's high school diploma, a photo of him playing varsity basketball, and a host of gallery announcements and posters capture his chameleon nature.

In 1969, Georg Baselitz, then a 31-year-old artist based in southwest Germany, began painting people, places, and things upside down. Over the course of the following decades, his art changed considerably. Nevertheless, he still inverts his subjects. This practice, coupled with existential themes, remains the hallmark of his art.