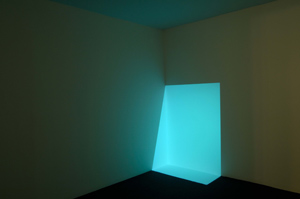 One thing that we have learned from Walter Benjamin is that any coherent and organically developing artistic movement will end up reentering the mainstream as a stylized version of the original impulse. For all their earnest optical scrutiny, the Impressionists seem forever associated with the reproductions of their work that decorate apartment walls and dentists’ offices around the world. Walter Gropius, Mies van der Rohe and others brought a messianic zeal to their utilitarian architecture—one that was designed to eschew gratuitous design in favor of pragmatism and functionality. But today those ideas are associated as much with college dormitories and public housing projects as they are with the crusade of Modernism.

The term “Minimalism,” coined in 1965 by philosopher Richard Wollheim, originally characterized a general phenomenon of reductive artistic tendencies that included everything from John Cage’s musical scores, to Allan Kaprow’s happenings, to Frank Stella’s black paintings. However, the term has since become aestheticized, condensed, and detached from its reductive and conceptual rigor.

Invisible Might: Works from 1965–1971 at NYEHAUS features six Minimal artists who demonstrate that the incidental sexiness that has made their work synonymous with good taste is built on a more analytical and challenging foundation.

In the main gallery, three of Fred Sandback’s familiar space-cleaving rectangles bend along the corner of the wall. From the entryway, the middle of the three stacked quadrilaterals articulated from thin nylon cords hovers around eye-level. It appears flat and seems to float in space away from the wall, while the two other forms are clearly defined by the bending contour of the wall.

Just to the left of the Sandback is “Light Column” (1970), a tall, slender, clear acrylic sculpture by Robert Irwin. The concave triangular perimeter of the eight-foot-high structure turns it into a prism, breaking the light so that Sandback’s linear black string lines acquire the rainbow edges of a Wayne Thiebaud cake slice.

The third work in the main gallery, also by Robert Irwin, is, along with James Turrell’s light sculpture on the second floor, one of the two real jewels in the show. Intermingling with the ribbons of intense light peeling in through cracks in the window shades, Irwin’s “Untitled” (1966–67) thrives in the gallery’s bleached white space. The power of the raw sunlight complements the restrained subtlety of Irwin’s convex circular sculpture as it casts a quatrefoil pattern on the wall behind it. The shadow-based design is precise and graphic, and its tones, while merely the effect of variations in exposure from four floodlights, manages to create subtle colors from shades of gray.

As for Turrell’s cross-corner projection in the gallery above entitled “Juke Green” (1968), it is what one expects from him: the ability to take something as abstract and intangible as light and make it concrete, palpable, and, in this case, extremely gorgeous. The aquamarine projection carves out a glowing wedge in the corner of the dark gallery so dense and opaque that until the viewer eclipses the light source the assumption is that the shape is solid.

The remaining works in the show are by three artists who’ve made long careers out of producing perfectly finished and seamlessly articulated objects that celebrate the post-industrial age. Larry Bell’s smoked glass box, John McCracken’s polished obsidian cube, and Craig Kauffman’s bright yellow acrylic relief are all sleek and delectable—they don’t have the awesome spatial and atmospheric command that Irwin or Turrell have, but all three have always made it clear that they celebrate the concrete refinement of General Motors over the abstract romance of Mother Nature.

This summer there are several exhibitions bouncing around the museum circuit featuring Minimalist and related art work, including Translucence: Southern California Art from the ’60s and ’70s that features most of the artists in this show. With the DIA Foundation expecting big things from its new High Line museum and its Beacon location hosting more and more visitors each year, it seems that these champions of enameled finishes and gentle manipulators of light and space are making a resurgence. One can only hope that efforts to reintroduce artists like Fred Sandback and Robert Irwin to the general public will engender a long-term appreciation for their searching, perceptual insights as much as the handsome materializations of their ideas.

Jamie Earnest’s seven medium-sized paintings each frame a window, an opening outward or a ladder leading upwards, linking her imagined space to an outside world.

This exhibition of paintings and works on paper underscores what a unique, highly accomplished, and still evolving body of work Guy Goodwin has achieved over the past several decades.