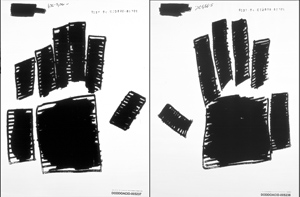 Two enormous black hands, blocky and clownish, greet you at the entrance to Jenny Holzer’s indispensable exhibition, Archive, at Cheim & Read. Palms out, fingers slightly splayed, they could be pleading for mercy or halting a vehicle at a checkpoint. As you approach their full eight-and-a-half-foot height in the gallery’s chapel-like front room, their comic grotesquery (the one on the left has an extra digit) exudes pure malevolence masquerading as a bad joke. Silkscreened in oil paint on smoothly primed linen, they are in fact enlargements of blacked-out handprints declassified from United States government files. Equally redacted sets of fingerprints hang on either side. The only clues we have about the individuals whose identities they record are scribbled in data boxes listing sex, race, height, weight, and eye and hair color. Four other documents in the room, which, from the alphanumeric coding in their lower right-hand corners, appear to be related, are entirely effaced, leaving nothing but black rectangles floating above footers reading “For Official Use Only.”

Like the traveling theatrical players in Shakespeare’s Hamlet, these images, freighted with secrecy, repression and thuggish violence, act as an abbreviated and mildly absurd dumbshow for the tragedy to follow, one that hits too close to home. The rest of the paintings in the exhibition reproduce densely packed texts from the military, the Departments of State and Defense, the White House, the FBI and elsewhere, pockmarked with blotted-out names and details when they’re not obscured altogether. Some of the documents have specific historical significance, like President George H.W. Bush’s National Security Directive 54, which outlined the U.S. response to Saddam Hussein’s invasion of Kuwait (its opening words are “Access to Persian Gulf oil and the security of key friendly states in the area are vital to U.S. national security.”) or the FBI memo, dated July 10, 2001, warning of “the possibility of a coordinated effort by USAMA BIN LADEN (UBL) to send students to the United States to attend civil aviation universities and colleges … [who] will be in a position in the future to conduct terror activity against civil aviation targets.” But most are incidental narratives of everyday brutalities—presumably from reams of similar material—arising from the current Bush administration’s so-called war on terror.

An epic-scaled triptych, twenty feet across, depicts a report from Guantanamo Bay of an FBI interview with a Pakistani captured by the Northern Alliance near Kondoz, Afghanistan. Forced into a shipping container with one hundred other men without food, water or adequate ventilation, he awoke after losing consciousness to find bullet holes through the container walls and “noticed the man next to him was dead. He saw green foam coming from the man’s mouth.” A multipanel piece, with amber text on a burnished bronze-black field, details an 11-page investigation into the shooting death of a handcuffed “Iraqi Cow Herder” by a U.S. soldier. Another report, rendered in eye-popping red on a mottled golden ocher background, records an interview with an abused Iraqi detainee whose jaw was broken while a bag covered his head. And a startlingly frank 13-part piece entitled “WISH LIST BLACK” (2006) begins with an undated document headed “Alternative Interrogation Techniques (Wish List).” These techniques include open hand strikes (“fairly self-explanatory”), close quarter confinement (“discomfort induces compliance”), white noise exposure, sleep deprivation and stimulus deprivation (“the human mind needs stimulation, however small, to maintain resistance”). This is followed by a moral struggle in the form of an e-mail exchange from August 14, 2003, in which one officer declares “The gloves are coming off gentlemen regarding these detainees, [deleted] has made it clear that we want these individuals broken,” while another counters “We need to take a deep breath and remember who we are…We are American soldiers, heirs to a long tradition of staying on the high ground. We need to stay there.” It’s obvious, from the events that have come to light since that date, which side of the argument won. 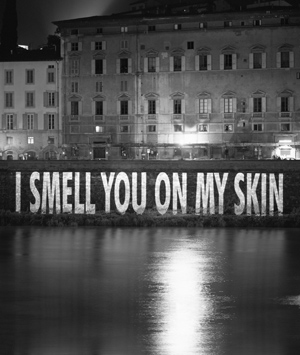 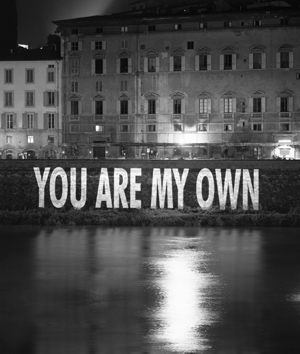 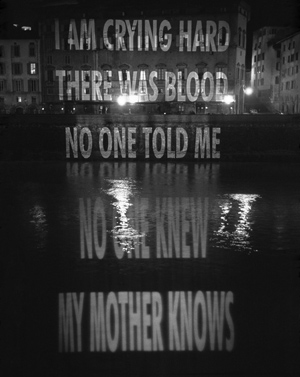 Holzer first used declassified government documents as texts for light projections on the façades of public buildings, so she can’t be accused of preaching to the converted. While the works in this exhibition may be paintings by dint of the oils and linen used to make them, they deliver none of the medium’s sensuality; they might rightly be called projections as well, but in paint instead of light. In her New York Times review of this show, Roberta Smith reacted to the paintings’ overall lack of visual fizz by remarking, “the narrative they construct would be more legible and unavoidable in book form.” But this misses the point that Archive represents the sins of a nation literally writ large. Its procession of unadorned, mechanical surfaces channel the documents’ impersonal language and stabs of pain into a dirge for a republic succumbing to the Faustian temptations of empire. In a way they look back to Holzer’s “Inflammatory Essays” (1979–1982)—plain offset prints of texts on colored paper spewing surreal political outrage—only now the inflammatory words are the government’s own.

The sensuality missing from Holzer’s paintings could be found directly across West 25th Street in Night Feed, her exhibition, in collaboration with photographers Attilio Maranzano, Gianfranco Gorgoni, and Beto Felició, at Yvon Lambert of outdoor public light projections in New York, Rio de Janeiro, Florence, Venice, Berlin, and Kanisfluh, Austria. Lines from Holzer’s own writings as well as the poems of Adam Zagajewski, Wislawa Szymborska, Elizabeth Bishop and others, glide across brick, stone, water and leaves, breaking into cubistic, velvety or stippled textures. The act of photographing these projections necessarily pulls quotes out of context, as it were, and in doing so fuses a particular set of words to a site and a moment in time. The resulting black-and-white image creates a lush new context for the poetry, one as independent of its original source as it is of Holzer’s projections. I’m reminded of poets like Pound and Eliot, whose use of quotations from other authors not only established their own originality but also transformed the reading of the earlier writers thereafter.

The contrast between the breadth of culture embodied in this work and the dearth of beauty or humanity in Archive goes without saying. If history were easy, we could say that the two shows represent two possible futures, like the choice posed to George Bailey in It’s a Wonderful Life. But instead we’re left with two equally strong, equally valid visions by the same artist of ascending Jacob’s Ladder and spiraling into the pit.

Baseera Khan: I Am an Archive

One hears Baseera Khan’s I Am an Archive exhibition at The Brooklyn Museum before one can see it.

from God of Mercy

We’re excited to publish an excerpt from Okezie Nwọka’s debut novel, God of Mercy. The novel begins in an uncolonized Igbo village, where a young girl’s sudden ability to fly ignites a war between gods and divides a community. The protagonist, Ijeọma, is eventually exiled and imprisoned in a neighboring village by Christians who believe her gift to be a sign of witchcraft. With its unique rhythm and magical rendering of Igbo cosmology, God of Mercy is an immersive meditation on the beauty of tradition and the dangers of dogma.

It traces the artist’s archiving and looks at their practices in an intimate way, but never turns the artists’ daily intimacy or history into artistic material in itself.