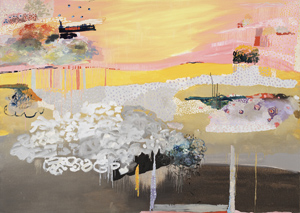 As Wherever, the title of her first New York solo exhibition in nine years suggests, Eva Lundsager paints abstracted iconic landscapes whose imagery lingers somewhere between familiar and otherworldly.

In small- to medium-sized works, Lundsager uses a complex palette that defines each piece’s distinct atmosphere, from somber browns, deeply saturated cobalt blues and glowing reds, to soothingly lighthearted pastels (it is interesting to note that green is infrequently used). Compositionally, vast skyscapes are usually employed as epic backdrops for more detailed conglomerates of vivid lines and broken-up forms, generating an overall sense of dialogue between universal grandeur and microcosmic existence.

In “Maddenlump,” “Merry Munk,” and “Little Screamer,” by means of broad, simplified strokes, Lundsager pays open homage to, as well as loosely translates, the fiery skies that dominate many of Edvard Munch’s “Frieze of Life” works. Capturing the brooding light that is so characteristic of the Northern hemisphere, Lundsager adopts the dramatic mood that in Munch’s oeuvre has served to underscore Munch’s own angst and emotional despair. However, because Lundsager’s abstract landscapes are devoid of any human presence, the effect is less psychologically charged, and the expressionist skies serve a more generalized symbolism: they function as a fascinating framework for the artist’s vision of nature as forceful spectacle. In that sense, Lundsager’s work connects with the European Romantics, and an idealistic association with J. M. W. Turner’s ecliptic seas or Caspar David Friedrich’s panoramas might not be too far-fetched.

In spite of this, there is a whimsical quality to Lundsager’s compositions and an overt playfulness that enables her own voice to shine through. One of the exhibit’s most successful paintings, “Hermit Style,” contrasts expansive color fields with confined areas of great detail. A light rose and yellow tinted sky, reminiscent of a spring sunrise, adds a strangely soft glow to the otherwise predominantly ash gray grounds. However, this soil is far from infertile, and various mysterious structures made of dotted lines and curvilinear swirls have begun to populate the scenery. As they thrive, so might our trust in the eternal cycle of life, which proves that even a lava field will at some point serve as a breeding ground for new life forms.

Looking at Lundsager’s works it becomes clear that it is the moment of transition, when nature morphs from one state to another—like the time before a thunder storm when the darkening clouds foreshadow the theatrical release to come, for example—that remains the most inspiring touchstone for her painting.

Pope.L, My Kingdom for a Title

Equal parts a peek at the artist’s sketchbook and a career retrospective through Pope.L’s iterative textual analysis, this book enlivens the artist’s fascination with language as a core mode of inquiry.

It might be best to think of it as a tightly-knit show of selected works, which unravels about half-way through as Katz’s imagery becomes increasingly abstract.

three from Now, Here, This: Half-Sonnets

Ron Silliman's latest publications are a co-edited collected poems of David Melnick, entitled Nice, to appear in 2023 from Nightboat and in the Russian anthology whose title translates into From Black Mountain to Language Writing: The Newest Poetries from the United States. Ivan Sokalov has recently translated You into Russian as well. Silliman lives in Pennsylvania but may be moving to Delaware. He teaches at Penn.