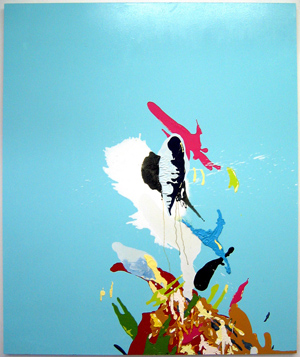 Painterly painting flat-lined, time of death, the late fifties. Since then it has been resurrected from time to time, but these attempts at resuscitation have often seemed like picking over a carcass, trying to find organs that are still viable for transplant. Now, in a Frankensteinian project to re-animate the dead tissues of the “Tenth Street touch,” young artists are grafting together reconfigured elements of that genre into unexpectedly fresh composites and releasing them on to an unsuspecting public.

Elizabeth Cooper has stated that her painting deals with various types of abstract “tropes” and involves a rigorous commitment to “process.” As evidenced in her paintings, Cooper’s “tropes” are a type of Post-Modernist deconstruction of the devices, techniques and mannerisms that have been established as norms in Gestural Abstraction. Through her subtle manipulations of these established forms, the artist both demystifies and draws attention to our acceptance of them. Typically, Cooper’s painting employs drips, splatters, stains, squeezing, splotting, puddles, pouring, oozing, bleeding, gushing, flicking, squirting, and drizzling. Their surfaces appear wet, dry, flakey, shiny, slimy, puckered, wrinkled, anodized, flocked, clumpy, chunky, blotted, clotted, cracked and dusty. These processes and qualities are not merely lists of words, but painterly incidents, a part of the language of painting that has been encoded with specific emotional associations. For Americans, the Abstract Expressionists were the first to impart emotional resonance to abstract painterly facture—the existentialist angst of Pollock’s urgent drips, or the tragic melodrama of Rothko’s floating fields of closely valued colors. Cooper has studiously isolated and catalogued many of theses techniques, adding a few of her own to produce paintings that while contemporary and fresh, nonetheless ring with historic precedents.

The eight paintings in this exhibition, all untitled and from 2006, share a vibrant palette that might initially appear discordant yet is satisfyingly rich. Cooper’s forms seem to ejaculate and gush forth from an edge, usually near the bottom center, across shiny grounds of monochrome enamels in designer colors like turquoise, terra cotta or harvest gold. There’s a sense of velocity and momentum in the tangles of paint as they shoot upward on the field. Some approach a feeling of still-life, bouquets not of flowers, but of painterly material occurrences. In “Untitled, 2006 (Pink)” puddles of thinned light blues and off-whites seep wanly up the canvas, with branches extending out diagonally like the unfurling leaves from a sprout. Chemical reactions from the pigments, dryers, gels and mediums cause the skins of some puddles to wither and pucker, changing once shiny passages to something resembling suede or orange peel. These reactions sometimes also affect the textures of overlaid or abutting bodies of paint.

Although the paintings proceed with a very controlled and articulate process of fabrication, the artist seems at pains to avoid any overt evidence of actual touch. All the pools, drips and squibs appear to have been applied from a discreet distance above the picture plane as if to avoid altering the natural finish of the drying liquids. Even the thick, slathering incrustations of knifed and tube-squeezed paint have an unconscious artlessness and seem to have applied themselves to the canvases. In this creation of imagery without visible hand manipulation, Cooper shares an affinity with others of the “poured painting” school, like Carolanna Parlato or Jane Callister, but avoids a homogeneous, slick overall integument by allowing the different properties of the various mediums and pigments to manifest their own unique alchemical destinies. In “Untitled 2006 (Turquoise Vertical),” through the intentional or unintentional process of inconsistent drying times, a centrally located amoeba-shaped sheath of light blue with black dappled paint almost succeeds in pulling itself free from the underlying slab of transparent black gel. Likewise, one senses an affinity with what has been called “Pop Abstraction”—painters like Giles Lyon and Jonathan Lasker who parody and critique Gestural Abstraction and the New York School by giving their brushstrokes an almost anthropomorphic character. This mannered isolation of brushstrokes, drips and other painterly elements replaces the notion of the gut-wrenching, hard-won incident with a pragmatic matter-of-factness that holds the potential for dumb deadpan humor, like the mischievous paint drips from a Road Runner cartoon.

With their unique paint mixology, glistening enamel, trendy coloring and splashes of mucus-colored gels, the works of Elizabeth Cooper seem petrified in time, somewhere between the present and the near future. Watching paint dry has never been more absorbing.