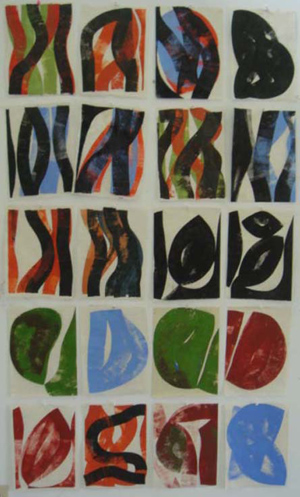 Sideshow Gallery’s current exhibition of works on paper by Sasha Chermayeff and Chuck Bowdish is a case study in the challenges on the road to making art. In the front room, Chermayeff exhibits what one might call roller paintings. She uses brayers—soft rubber rollers usually used for inking lithographic stones, etching plates or woodblocks—roughly four inches wide to apply one color at a time in curving arcs and swirls on 18” x 24” mid-weight paper. They are restrained in affect, generally composed with no more than two-to-three colors and a good bit of white paper left untouched. In several works she joins multiple sheets with no more than a single brayer line traversing the paper’s nearly abutted edges.

In spite of the fact that Chermayeff seems at ease with a variety of ways to create expansive gestures, the amount of paint that will fit on a brayer is much more limited than a brush. You have to keep the paint pretty thin; you cannot trowel it on with a brayer and expect the brayer to function smoothly. One wonders if the apparent simplicity is a result of a long arduous process invested in form and material or is it a casual decision made for technical comfort. (In some instances, Chermayeff’s gesture recalls the poetic eloquence of the late de Koonings, but what appears to be simple and reductive in his so-called “Old-man style” is a result of a lifelong struggle to gain coherence through a complex dialogue with artists of the past like Ingres or Picasso as well as his own contemporaries: Gorky, Pollock, Guston, et al.) Perhaps Chermayeff surrenders to intuition over studiousness; however, in a number of her smaller pieces, this limitation creates a favorable ratio of paint to paper, but many of the larger pieces teeter on the brink of unraveling. There isn’t enough paint on their surfaces to hold one’s interest and, as a result, the gestures themselves seem to lack vitality. 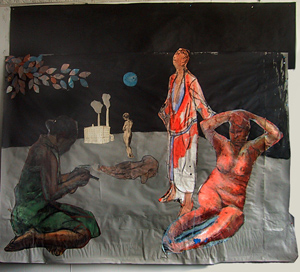 In Sideshow’s back room, Chuck Bowdish’s oversized collages are dark and mysteriously foreign. They reveal a romantic vision of an unnamable world, one that is both exotic and yet familiar. His visual repertoire could be likened to Paul Gauguin’s figures infused with Mario Sironi’s muted palette of the dense, industrial city of Rome. Although they lack Gauguin’s clear figurative forms as symbols of his dreams or Sironi’s classicism and political vision, they indeed testify Bowdish’s self-imposed burden to find new ways of bringing personal conflicts to a visual synthesis. There is a pervasive narrative that depicts a strange cast of shadowy figures in ritualistic postures beneath billowing palm trees, dark skies and scattered architecture. Though this work does not lack in physical presence—the collages are so laden with material that some of it seems on the verge of falling off—there remains something unresolved about them. It resides in the condition, to which all two-dimensional artwork must submit, of being both image and surface. An artwork must pull you in from across a room and, once it has you up close, it must deliver with a surface that proffers pleasure inch by inch.

Collage is particularly vulnerable in this area. If its elements are not perfectly placed and carefully integrated, its seams are all too apparent. Bowdish’s collages satisfy as images; the figures and environments relate well in terms of scale and their symbolic import is clearly evident. But when one approaches, say, his depiction of a lady bending at the waist beneath a foreground palm tree, it is unsettling to see the haste with which the palm’s leaves are cut and the off-handed manner in which the small, brown bird in the upper right-hand corner is stuck to the black, acrylic sky.

In contrast to popular misconceptions of art as an unmediated expression of the self, it is, in fact, a profoundly self-critical endeavor, one that demands merciless scrutiny, discipline and engagement with exterior models. An artist failing in this area will make work that struggles to communicate fully to a viewer.