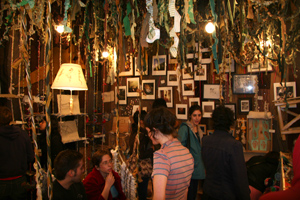 Saviour Scraps and Cabin Comforts artists, Inside the cabin on opening day, May 13th, Fabric Installation and Mixed Media.

The site-specificity of Cabin Comforts serves as a conceptual framework for the communal art store created by Saviour Scraps, an artists’ collective made up of Katie Kiline, Jojo Li, Brieana Ruais, and Shabd Simon-Alexander. It is almost impossible to view the show out of context of the gallery space, Secret Project Robot, and the massive redevelopment of the waterfront along Kent Avenue. In relation to the surrounding space, the show transcends nostalgic sixties Utopianism and begins to read as a subversive act of defiance amid the commercial transformation of Williamsburg’s waterfront into luxury housing.

Saviour Scraps, an allusion to the group’s preoccupation with fabric, appears to be proceeding from the post-feminist critique of authorship and capitalism by means of the traditionally feminine aesthetics of craft. The store, carved out of a corner of the gallery, is built out of layers of fabric and decoration into a “total environment,” recalling the Arts and Crafts idea that every aspect of a home should be designed and crafted by hand. A Rococo-inspired swinging couch, made from colorful scraps of tied fabric, hangs in the center of the space, while similarly crafted fabric pockets and swinging and stacked shelves hold an array of objects from stationary to zines. The fabric creates a lush, warm, organic environment for browsing through the collection of objects, which were contributed by artists invited by the collective to create a sense of home.

This aesthetic decision allows for almost anything one might find in a home—art, music, furniture, videos—to be included. The curatorial premise blurs the line between art and craft, commercial and handmade, to the point where the distinctions are rendered almost meaningless. What stands out as the most obvious ‘art’ in the room is a DVD video series presented on a television framed in a wooden fireplace. Videos by Grant Worth, “Untitled Miami Kaleidoscope—Version 1 Fireburn Downtown” and Antoine Catalo’s “Winnie the Peyotah” are standouts of sentimental psychedelia filled with eighties pop culture references.

While the collected objects are of varying degrees of interest, the design of the space and its location serve as a feminist critique of the Modernist prohibition against ornamental illusion. Saviour Scraps and the contributing artists tear down the walls between architecture and object to create a pre-modern exhibition space where ornament and illusion were not viewed as a criminal act against essential forms. While the critique of Modernism and its severe restrictions on ornamentation would be more explicit in a contemporary Chelsea gallery space, it resonates with the looming glass towers further down Kent Avenue and the eventual absorption of the gallery itself by redevelopment. Saviour Scraps participation in Allison Smith’s Muster on Governor’s Island gives some insight into the political dimension of their work. In Muster Menders, they invited the audience to mend healing objects through craft in opposition to military action. Cabin Comforts reads like a youthful act of protest amid inevitable commercial development. It’s a fitting metaphor for the larger cultural changes in Williamsburg wrought by gentrification—making a home almost entirely by hand in direct contrast to the promise of luxury living in clean, unadorned Modernist cubes.

Sadly, the show loses some of its potential for critique of authorship by remaining firmly in the territory of a group show. The contributors’ works are individuated and the artists’ names and photographs are displayed in a ledger inside the store. By recognizing individuals within the communal store, competition inevitably arises. One can page through the ledger of sales or single out interesting projects like Jocelyn Dam’s “Crocheted Fungi,” Hanna Aran’s day-glo “Rocks,” and Caitlin Berrigan’s project “Viral Confections.” Ideally, in a commune, such hierarchies would be unnecessary, but the beauty of Cabin Comforts isn’t in the attempt to de-emphasize the role of authorship but in the gesture of creating a “total environment” that stands as the antithesis of the compartmentalization and reductive materialism of Modernist architecture. It is also a reminder of the loss of arenas for creative experimentation that spaces like Secret Project Robot once afforded young artists in Williamsburg.