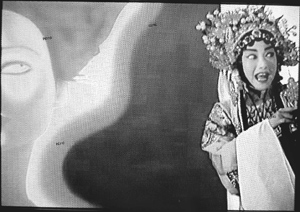 Qian Yi in front of a painting by Feng Zhengjie, “Chinese Portrait L Series 2006 No. 2.” Photo by Ellen Pearlman.

Contemporary Asian Arts week, held since 2002, is dedicated to showcasing the best of Asian Art through a consortium of 28 participants. Though the week is pan-Asian, Chinese artists in particular are gaining rapidly in the New York art world. Galleries like Jack Tilton, Art Projects International, Ethan Cohen, and Max Protetch are infiltrating China as well by developing programs and residencies based on cultural exchange. China is undergoing its largest cultural schizophrenic leap since the days of the Red Guard, and quickly transforming from a Communist society to a two-tiered capitalist society. It is doing this in the midst of a vicious streak of censorship and sandstorm clouds full of gritty pollution blown in from the Gobi Desert. The question then, in the midst of all this commotion, is what exactly is new Chinese art?

Thematically, contemporary Chinese art breaks down into the past, the body, and the future. Pure abstraction is skipped over, or just not dealt with, probably because most Chinese artists are still emerging from decades of kitschy social realism and their vanishing Maoist past. This brings forth a proliferation of fuzzy portraits (as in fuzzy past memories) of Mao, young Red Guards, the military, or, in certain select cases, Lenin. Traditional arts are often used to portray these themes, such as paper cutting or calligraphy, and ironic positions and poses are struck to upgrade their relevance to the newest generation of young Chinese artists.

The artworks dealing with the body focus on that jack-in-the-box even the most strident self-criticism class could not take away: sex. On one level sex is just that and young Chinese are reveling in their newfound freedom by using nudes, fully exposed and graphically depicted genitalia and a habitual use of stacking, as in stacking nude bodies on top of one another in chunky scenarios, usually public and often atop crumbling or destroyed locations. This gets into another use of bodies: the portrayal of urbanized alienation, overcrowding, and the loss of self and identity. Retreating into the body in a state of ennui is the preferred method of dealing with poisonous but subtle state control, as depicted in the languid oil canvas portraits by He Sen from Yunan Province. His painting, Dudu and Her Toy, apes photorealism and shows an angry woman with a cigarette in one hand and a stuffed animal in the other. She lies prone on a bed, wearing a sexy get up and sporting an impassive face with glazed, furious eyes.

The third theme, coping with the future, has younger artists flocking to glam in the same way that Ziggy Stardust a.k.a. David Bowie and glam rock pervaded the sensibility of the ’80s. This is evidenced by large oils with a spray-painted look of chic (mostly) women in Day-Glo colors, with short, styled hair, often smoking cigarettes—harbingers of a nascent hipster/consumer culture set to burst its banks and overflow the style dams of China. At Jack Tilton, during a performance of the traditional Chinese opera Xiao Yan (The Little Banquet), the twenty-fourth episode of Eternal Palace, the singer, Qian Yi, dressed in silk robes and an ornate headdress, seemed caught in a time warp competing with an overblown painted headshot, airbrush style, of her contemporary faux sister, “Chinese Portrait L Series No. 2” by Feng Zhengie, hanging on the wall directly behind her.

These three themes—the past, the body, the future—occur frequently in group shows both here and abroad, with toy-inspired sculptures and occasional riffs off of kung fu movies adding another thematic substratum. But it is Chinese video art that really goes for the jugular and obliterates the need for art history to look back over its shoulder. It also seems to be a medium where many are hitting their stride, because there is no 5000-year-old tradition to kowtow to, and finding their own voice—as long as it doesn’t directly confront the current taboos of politics or religion. Chiah-jen Chen’s video, Factory, shown in the Fast Futures video selections at the Rubin Museum of Art, is a work by a highly original and perceptive filmmaker, one whom American curators should pay close attention to. A two-time Venice Biennale exhibitor from Taiwan, he explores the relationship between ruins and the civilizations they emerge from. In his haunting Factory, which contains almost no sound, ancient seamstresses stand in morose silence around a ramshackle, abandoned garment factory. The video is shot in elegiac swoops and long, slow, grinding takes that evoke a sense of decay and desolation. Chen is a major presence, a filmmaker with roots in the grand Soviet traditions of Sergei Eisenstein, Andrei Tarkovsky and Aleksandr Sokurov’s Russian Ark, who conveys profound feelings that need no interpretation. The quick edits and multi-angle shots typical of an urbanized multitasking MTV generation quail before his honed aesthetic.

Chen Qiulin from Chendu, which is situated on the border of Tibet, showed photographs at the Max Protetch Gallery that also explored themes of urban decay. She uses staged phantasmagoric events of Chinese opera singers atop dirt fields juxtaposed against newly sprouted apartment complexes on empty lots oozing with alienation and claustrophobia. Her pictures of a traditional art form in a devastated vacant lot next to a tasteless modern building erupt with questions about national identity: where have we come from, who are we now, where are we going. With the Olympics less than two years away, these are questions set to blast China open, with no easy answers in sight.