DADA
The Museum of Modern Art

“What is Dada?” asked Theo von Doesburg. The answer came from Tristan Tzara: “Dada is a state of mind.” 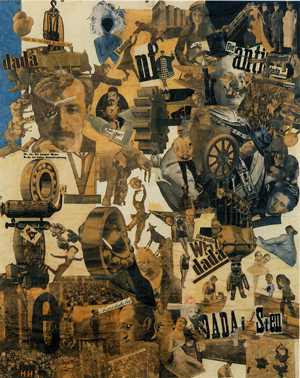 One hundred years ago in Eastern Europe, a complex revolution was taking place: the Spontaneous Contagion of the New. “At last you are weary of this ancient world” wrote Guillaume Apollinaire in his poem, “Zone” (1912). In Eastern Europe, the Russian Tsar banned progressive art from the West along with the Yiddish Theater, creating conditions conducive to pogroms against the Jews. Socialist-Marxist groups in Germany, Russia and Poland attempted political coups, which failed. Artists stepped up to protest rampant militarism, oppression and anti-Semitism. Even before 1916’s manifestation of Dada in Zurich, there were already many scattered movements of avant-garde art—expressionists, cubists, and abstractionists—in such urban hubs as Paris (Alfred Jarry’s Ubu plays), New York and Berlin.

But Eastern Europe was the hotbed—of a newly mechanized war and a newly imaginative art: Larionov’s Rayonism in Moscow; Urmuz’s absurd fiction in Bucharest; Kafka with his own “absurdism” in Prague; Lajos Kassak’s Ma magazine in Budapest. They were all the involuntary forerunners of Dada.

Then came the messengers of the newest, most far-out expressions of what had been percolating, transcending physical as well as metaphysical borders: Wassily Kandinsky and his Blaue Reiter group; Kasimir Malevitch’s Suprematism; Apollinaire (a blueblood from Poland and Italy) in Paris; Brancusi, a Romanian who traveled across Europe on foot to France with his conception of abstract purity. Tristan Tzara, Marcel Ianco and Claude Serner escaped army conscription in Romania and fled to Zurich to export avant-garde theater with a Romanian accent at the Cabaret Voltaire. By now the word was out: Dada.

From the very beginning Dada was misunderstood, attacked, forbidden, exiled, confiscated, arrested and burned. The Communists called it decadent; the Nazis considered it degenerate; the bourgeoisie found it incomprehensible; even the Surrealists declared it “dead” in 1923.

It’s hard to believe that, 90 years after its birth, the American government is now sponsoring the largest Dada exhibition ever, featuring more than 450 works by nearly 50 artists, first at the National Gallery of Art in Washington and now at the Museum of Modern Art in New York. The show originated at the Center Georges Pompidou in Paris with 2,000 artifacts and artworks in a chaotic, eccentric display (it closed in January). This exhibition was mounted under the auspices of the French government; it is ironic that what began as such an anti-establishment art movement is today sponsored by federal agencies.

As MoMA curator Anne Umland pointed out at the opening, there are two entryways to the show: The one on the left leads to “New York-Dada,” with Marcel Duchamp’s artworks, and the one to the right goes to “Zurich-Dada,” with Cabaret Voltaire masks and puppets. Other entryways are less evident, but the inescapable fact is that Dada comes from the East.

In her introduction to the catalogue, Leah Dickerman, curator at the National Gallery of Art in Washington, muses, “there were activities as far-flung as Romania and Japan.” Maybe Romania is “far-flung” for someone in Washington, but for travelers on the Orient Express, Bucharest—called “the little Paris”—was just a few hours away from Vienna and abuzz with new ideas and strange new art.

Almost half of all the active practitioners of Dada were Eastern Europeans or Jewish of Eastern European ancestry. Most of them, unfortunately, are not represented in the Dada show. The neglected artists from Romania include Brancusi and Arthur Segal; from Russia: Burlijuk, Stravinsky, Kandinsky, Archipenko and Sonia Delaunay; from Poland: Sczuka, Slodki and Jasienski; from Croatia: Dragan Alecsici, Micic, Branko and Polianski; from Hungary: Moholy-Nagy, Huszar and Palopovski; from Czechoslovakia: Teige, Walter Serner and Matousek; from Slovenia: Kosovel, Delak and Kogoj.

After Tzara’s death in Paris in 1963, I began to research his philosophical and spiritual legacy. I discovered that an essential part of his philosophy had been totally ignored and continues to be disregarded today. Dada was for him a spiritual quest; in his manifestoes and lectures, he shaped the first contemporary humanistic art movement that was multicultural, anti-war and anti-inhumanity. As he wrote during World War I: “Dada is the abolition of those incapable of creation. Dada is the belief in the god of spontaneity. Dada is the roar of controlled pain. Dada is life, Dada is freedom, Dada is the meeting point of all contradictions. It’s the focal point of all things contrary. It’s the epicenter of divine prophecies.”

Tzara went on: “Dada is a supreme religion of truth and true feelings…The world has gone insane; the artist makes fun of insanity—a gesture very sane, indeed. Throw away the old rules. Manipulate your chance. Dada is a virgin microbe that will get into your brain only in the places where the conventional is not present!”

It was shortly after Tzara’s arrival in Paris in 1920, eight years after Dada’s earliest eruption, that Andre Breton hijacked the movement’s manifestoes and the artists themselves to create the Surrealist movement in 1924. It swallowed up Dada lock, stock, and barrel.

Fast-forward again to MoMA, where the current exhibit is a bit didactic, a bit splashy but stylishly displayed. The chronology is broken into seven timelines and six cities. Berlin, Cologne and Hannover are represented by Max Ernst, Hans Arp, Sophie Taeuber-Arp, Hanna Hoch, John Heartfield, Johannes Baargeld, Raoul Hausman and Kurt Schwitters, whose collages are still the best example of the “challenge to painting” that German Dada had to offer. The Nazis burned some of their works and tried to destroy the rest. They did not succeed thanks to Hannah Höch, who buried artworks in her garden and stood vigil over hundreds of collages for many years to save them.

Jean Crotti, Man Ray, Francis Picabia and Duchamp dominated New York Dada mischief from 1913–1920, but many left New York for Paris after the Prohibition Act of 1919. Duchamp complained in a letter: “One doesn’t drink here anymore and it’s quiet, too quiet.”

But today the Dada fever is spreading in New York, and several other galleries are displaying art from that period:

• Hans Richter (1888–1976), Dada: Art and Anti-Art, a comprehensive overview of Richter’s career, including rarely seen work as well as his visionary films, at the Maya Stendhal Gallery through Sept. 16.

• The Swiss Institute is presenting Dada sound archives of original recordings of poetry and performances through July 15.

Dada was the first art movement to create a universal avant-garde gestalt, an international language of constant radicalism. It swept away academic, fossilized theater, art, literature and music with a tsunami of spiritualism, spontaneity, chance operations, multiculturalism, invented languages, art-cinema, collage and democracy among artists. After the deluge of Dada came the modern world.