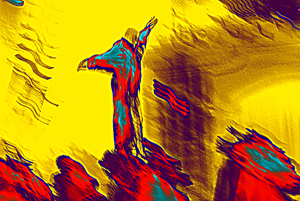 For those last few people who still don’t live in Brooklyn, and even for all the supposedly savvy among us, theatergoing in this borough retains a strong whiff of adventure. We set out in merry exploring parties to find the mythical temples of BAM, the hidden mysteries of St. Ann’s Warehouse, the crumbling pools of McCarren Park. The pleasure of the event is heightened by the anticipation of new neighborhoods, elegant and unusual buildings, history, and the ever-present spice and fear of getting hopelessly lost. When we finally arrive, we arrive in triumph, ready to be delighted by whatever wonders are on offer.

This month, pack your compasses and your camels, put on your brightest tutu, and hop a bus down to Red Hook for the most triumphant find of them all, CircuSundays at the Waterfront Museum and Showboat Barge. The museum, docked at Pier 44, is none other than New York Harbor’s last working wooden cargo vessel, the Red Lehigh Valley RR Barge #79. LV79 is the project and consuming passion of David Sharps, a juggler and maritime enthusiast who bought the boat for a dollar, on condition that he clean and remove it from the Jersey mudflat where it had rested for several years.

From the beginning, Sharps had showboat ambitions for his historic purchase, and he called up an old friend and colleague, Karen Gersch, to inform her that she’d be the ideal person to help him create (what else?) a full-fledged circus right on the boat. Gersch, an accomplished acrobat and seasoned event producer, as well as a co-founder of the Big Apple Circus (and the villainess in every single production during her undergraduate years as an art student at Pratt), agreed enthusiastically. 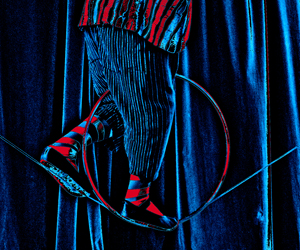 “Little did we know—” she sighed, twelve years later. CircuSundays began its first season with a nonexistent budget, “zero as in zero.” Luckily, the circus community is small and tightly knit, and Gersch, by her own admission, knows everyone. (She suspects this to be the other reason Sharps called her.) Playing up the lure of the unusual and beautiful venue, she was able to persuade veteran performers to participate for no fee and a promise of the future. Not a single person she asked said no.

These days, CircuSundays takes place on four Sundays every June at the Museum’s new dock home at Pier 44, and overflows with a wonderful array of performers, a different lineup every week. This year, the festivities will also include a gallery show of Peter Angelo Simon’s Floatographs!, brilliantly colored “photo-paintings” of circus performers and the barge interior itself.

As Ringmistress, Gersch is the show’s one constant, and she has her hands full turning a handful of individual acts into a cohesive show. The circus still runs on what she kindly refers to as “a bit of a shoestring,” which limits rehearsals to one run-through on performance day. The performers open and close the show together, and often assist with one another’s acts. As Gersch says, “everybody rises to the occasion, we all know each other. It’s a really fun thing for us.”

Part of the enjoyment of working on the barge comes from the opportunity to work in a more intimate environment than a big-top arena. The stage occupies one end of the upper level of the barge, a small wooden area with velvet curtains. The barge doors are often open to the harbor, although, Gersch warns, “the jugglers don’t like that.” There are chairs for one hundred spectators, as well as rugs for fifty children to sit on, right in front. Sharps and Gersch believe that their circus is at its best experienced up close, and they take care to make it interactive. At last year’s show, Gersch introduced each act by drawing them in the position in which they were to appear. She then “auctioned off” the drawings, presenting them to audience members with stars hidden under their seats. This year, as might be expected, she promises something completely different.

Acts and artists are frequently “stolen” from other circuses, including performers from Cirque de Soleil, Hungarian and Russian circuses, and, of course, the Big Apple Circus. CircuSundays also provides an important showplace for rising artists, caught in the void between their garages and the big time. Sharps’ daughters, Dalia and Sophie, debuted an aerial act last year, and will be returning the first and third Sundays of this year’s season. Sharps himself is one of the only Western practitioners of the art of Chinese vase manipulation. This year’s program will also include a 16-year-old juggler from the Big Apple Studio, perennial favorite Billy Bones the Good Pirate, Dikki Ellis: Clown Prince of the Slackwire, and a very special group from Nyack; a youth circus born in the aftermath of 9/11.

The Amazing Grace circus began as a church drama group. After the attacks, needing something very special to bring joy to their community, they begged their advisor — long time circus performer Carlo Pellegrini, to help them create a circus. He held out, cautioning that they would have to be really serious, and put in a considerable amount of time. Eight of their accomplished performers will be joining CircuSundays this year.

Gersch is particularly pleased that Amazing Grace features human pyramids, a traditional circus skill that seems to have fallen out of fashion. As she says, “there are many, many shows these days that adopt the name, Ã«circus.’ People seem in love with the word, though not everybody knows what it is.” She presents “typical,” though certainly not old-fashioned, circus acts, enjoying what the form offers at its purest. Gersch likes to include young performers, calling them “good role models” for the younger members of the audience, whom she clearly hopes will all be inspired to join up.

And who is this audience? The ever-growing mix of eager circus-goers includes everyone from infants (“they just love it”) to the elderly. Everyone is encouraged and welcome, and the barge is 100% handicapped accessible. Surprisingly, not all of the audience is local. People come from as far away as Pennsylvania, drawn by the time- tested irresistible lure of the showboat. Borough President Marty Markowitz, a big supporter and frequent attendee, calls them “Brooklyn’s best kept secret.”

While Markowitz, as is his wont, may be exaggerating, his statement could be extended to apply to all of Red Hook, a neighborhood whose rising trendiness belies its pleasingly forgotten aura. When I visited David Sharps at Pier 44 in mid-May, he casually gestured to a large building on the other side of the street and announced that the Fairway would be opening any day now. Sharps and others are also very concerned about the plans for building a new IKEA store, whose parking lot will oust the last remaining graving dock (boat repair facility) in the area. With the resurgence of boats in New York Harbor, Sharps maintains, eliminating the graving dock would be akin to leaving a highway without a single gas station.

These developments are alarming, but it will take more than IKEA to destroy the real camaraderie and collaboration that makes the Waterfront Museum and its neighbors so special. Right now the waterfront remains breathtaking, and the neighborhood heart-stoppingly appealing, with small wooden buildings, gardens on most of the sidewalk strips, and beach roses out by the water. Standing facing the barge, the Brooklyn Bridge on one side and the Statue of Liberty on the other frame a perfect view of New York Harbor.

Sharps, who is planning an exhibition on showboat culture and history next year, speaks of the eagerness with which those magical floating worlds were anticipated in small towns along the waterways, bringing news and the best entertainment of the year. As a jaded New York theatergoer, overwhelmed with productions and with news, I can’t say my anticipation is any less. I can’t wait to go.

In a twist on the traditional midway, the long esplanade and garden, complete with a stone bridge and a 40-foot gangway, offer an enticing physical path of approach to the circus. The audience is “really aware of the very unusual path [they’re] taking to get there, but once you physically step out of the gangway into the boat, that’s where the real magic begins…even the grown-ups, you see them when their mouths open. It’s got a magic from when you step aboard,” comments Gersch. “Hopefully what we do enhances that.”

For a complete lineup and directions to the Waterfront Museum, visit www.waterfrontmuseum.org.

Katya Schapiro is a writer, actor, producer, and director who catalogues literary philosophy and equestrian manuals for a living. For current and recent activity, see www.polybeandseats.org , www.blueboxproductions.net, and www.newvoices.org.