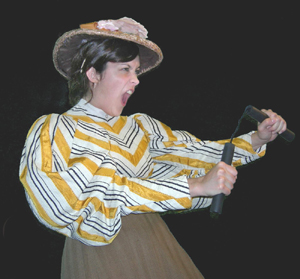 No more cucumber sandwiches: The Kung Fu Importance of Being Earnest at the $ellout Festival. Photo by Michael Gardner

The Brick wants hookers. And not just any hookers—pricey hookers. Or so say its producers in their announcement for the upcoming $ellout Festival, which, beginning June 2, will present 22 works of “sellout-themed” theater over the course of a month. Given its alternative aesthetic and Williamsburg location, one might expect the Brick—a diminutive building that looks like little more than a hyphen between its four- and six-story neighbors—to demand offbeat acting, not high-class tail. But now, with its third annual summer theater festival, the Brick is going commercial.

Or is it? “We were trying to think of something that would play off of the idea of us as a small artsy Williamsburg theater space,” says associate director Jeff Lewonczyk. Perched on rickety wooden chairs outside the Brick’s entrance – a wooden door small enough to recall the entrance to the garden in Alice in Wonderland – Lewonczyk and co-associate director Hope Cartelli explain that the “sellout” concept is, more than anything, a self-conscious spin on the theater’s own identity. “The idea of using this very specialized environment as a platform for great fame and riches struck us all as being rather funny,” says Lewonczyk, as giant trucks lurched past the Brick down Metropolitan Avenue.

Specialized or not, the Brick’s themed summer theater festivals have become increasingly visible, beginning with the Hell Festival in 2004 and followed by last year’s Moral Values Festival. As they’ve grown, the festivals have become not only a showcase for new work but also a catalyst for its development: in last summer’s Moral Values Festival, “it was fascinating how many people just responded to the very subject and developed new work,” says Cartelli. “It seems to be happening more and more.”

This summer’s producing mandate has proved particularly fruitful, going beyond irony to accommodate a range of variations on the “sellout” theme. “We’re sort of getting shows that are pitching themselves as being big wacky commercial extravaganzas – the show itself is a sellout – and we’re also getting shows that are dealing with the theme of selling out within the content of it,” Lewonczyk says. In this first category one might find The Kung Fu Importance of Being Earnest and a puppet-musical version of the movie “Die Hard,” while the second boasts a sellout-themed King Lear. Somewhere along this spectrum is Lewonczyk and Cartelli’s contribution: Sexadelic Cemetery, which borrows from a 1960’s “sexploitation” vampire flick, and, according to Lewonczyk, explores selling out on both “a literal level” and “a metaphorical level.”

In curating the festival, the Brick’s directors were surprised to find that it was the complex plays, the ones unlikely to be optioned for Broadway anytime soon, that they ultimately preferred. “We had, I believe, four Tom Cruise-Katie Holmes shows that applied,” Lewonczyk recalls, “And things like that, with more, sort of, ‘Hey check this out! Pop culture theme!’ and we ended up not taking as many of those as we expected to.” Exploring their chosen topic became more enticing than guaranteeing a sold-out house: “We ended up rejecting a lot of the shows that would have been more overtly sellouts,” muses Lewonczyk. “In a way we sort of sold out the sellout concept.”

Gary Winter, a member of the playwriting collective 13P and author of The Impotent General, which will be presented at the festival, is grateful they did. Winter’s play stemmed from conversations he overheard at a Robert Rauschenberg exhibit, which inspired two scenes examining artistic selling out – one of which is to be performed solely by two plaster sets of teeth. (Winter’s father is a dental technician and will be pouring molds specifically for this purpose.) Bookending these sections are meditations on the Pocahontas story, one of which incorporate riffs on a 1962 pulp novel about an aspiring model named Suzy-Dawn. “The reason I was drawn to Pocahontas and Suzy-Dawn was that I was interested in how images are sold,” says Winter, adding, “very few theaters would do this type of work.” Lewonczyk and Cartelli agree that they deliberately cultivate a non-conformist aesthetic, recalling that a playwright friend recently coined the term “avant-populi” to describe their dramatic style. “It is experimental work,” says Lewonczyk, “but with a broad base – experimental work with a popular bent.”

Lest it veer too far from its profit-driven heart, the $ellout Festival also includes a group that literally sold out. On April 7, the Youngblood Playwrights’ Group – the Ensemble Studio Theatre’s company for playwrights under 30 – announced an Ebay auction, the winner of which would have the honor of seeing his or her life story transformed into Youngblood’s next play. The minimum bid was set at $100, and after 10 days and roughly a dozen bidders, a victor emerged: Tom Richford, a 44-year-old musician and computer engineer who anted up the winning bid of $521.

That $521, explains co-artistic director R. J. Tolan, will constitute the entire production budget for The True Life Story of [Your Name Here]: Tom Richford, written collaboratively by six of Youngblood’s 16 playwrights. After meeting with Richford as a group, the writers divvied up segments of his story and began working toward a stage play of Richford’s life – or their version of it. “It just sounds strange to say,” says Tolan, “but he just really wanted his story told as a play. And we’ll deal with this in the material.” Yet even with such a coldly capitalist theatrical model, Youngblood’s playwrights still see The True Life Story as an artistically engaging endeavor. “There’s the pleasure of the sheer experiment of it…having someone come to us and dealing artistically with whatever we got from that,” says Tolan, “but the most satisfying and enjoyable part of it is wrestling with, now that we’ve met this guy, how do we distill that and present it to the audience.”

Outside the Brick, a takeout delivery man approaches to ask directions, and Lewonczyk and Cartelli point out a favorite pair of dogs leading their owner across Lorimer Street. Neighborhood residents drift in and out of a nearby laundromat. Drawing local audiences has been slow for the Brick, Lewonczyk and Cartelli note, estimating that no more than a third of their current audience comes from Williamsburg. “A lot of people,” says Lewonczyk, “consider theater to be a little musty, to be a little bit old-fashioned just inherently as an art form. And here you are in Williamsburg, where everybody considers themselves to be more or less right there on the bleeding edge.” When the neighbors do peer inside, Lewonczyk laughs, they tend to inquire whether the Brick is a bar.

The theater’s identity may be harder to mistake after the $ellout Festival presents Lisa Levy’s outdoor spectacle Red Carpet LIVE! Best known for her long-running Psychotherapy LIVE! – in which she invites audience members onstage for 13-minute counseling sessions – Levy will stage a variation on her act by involving the audience in an improvised mock awards ceremony. Capitalizing on the Brick’s cramped architecture, where the stage leads to a tiny hallway-cum-lobby which leads directly to the sidewalk, Levy will run a red carpet out the theater door and a co-actor will interview approaching audience members about their attire, coiffure, and companions. Once inside, Levy will orchestrate a mock panel discussion with prizes presented to the audience members who excel in the categories “Best Undressed,” “Most Remarkable,” and “Most Likely To Be Searched At An Airport.” “What I always enjoy is the feeling of everyone in it together,” says Levy. “I don’t put myself out there to be the star of everything. To me it’s more about hosting a party.”

She could be speaking for the Brick as well. “The theme,” says Lewonczyk, “is speaking to a sort of misapprehension that off-off-Broadway is automatically a launching pad for a one-way path that leads straight to Broadway…much of the work that we’re putting in the festival is the sort of work that exists joyfully on the level that it’s meant to exist on.” Levy agrees: “It’s really the adventure of the work growing that I’m interested in,” she says. “If this was really selling out that would be wonderful. It would imply that something was easy – and this is anything but easy.”