Wearing jeans, a black jacket and dark glasses, Victor Andrews comes barreling into the entrance hall of the Ryerson Towers apartment building in Clinton Hill, Brooklyn, delivered to the door by his school-bus attendant. He is a teenager well on his way to becoming a large man, his youth betrayed by the still-emerging beard sprouting on his full cheeks. 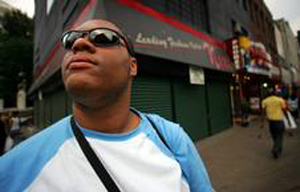 Wildly swinging a red-tipped white cane held loosely in his dark hand, Victor pauses for only a moment to banter with the doorman. In one continuous motion, he pulls out his keys, finds the right one, unlocks the interior door and disappears inside. The lobby falls silent again, and the man at the desk lets out a laugh. “Victor’s quicker than anyone else in this building,” he says, smiling. “Other people take two, three minutes just to find their keys!”

Victor, 19-years-old and graduating from high school this month, negotiates his world like any other boy on the edge of manhood: he pumps up his tall, broad body with bravado and blazes forward, unstoppable. He focuses on the future, unwilling to talk about how he lost his sight when he was six.

On the street, he moves quickly, sometimes too quickly, and this worries Annalyn Courtney Barbier, an orientation and mobility specialist with Visions/Services for the Blind and Visually Impaired, who has been training Victor once a week for five months in order to expand his world beyond the two-bedroom apartment he shares with the grandmother who raised him; Edward R. Murrow High School in Midwood, where he is the executive producer for the fledgling radio station; and Hanson Place Central United Baptist Church, where he sings tenor in several choirs.

Victor moves between these places as a Siamese twin, with a sighted person always at his side, and while his school has provided training in the use of a cane, there are limited resources for teaching Victor how to negotiate public transportation or city streets. Victor is eager for independence and pins his hopes on getting a guide dog. “When I get that dog, I’m gone, man!” he says. And while Victor may one day undergo the intensive 26-day training in which he and a guide dog learn to move as one, for now it is his overconfident cane use that worries Ms. Barbier.

Victor’s destination today is Beat Street Records in the Fulton Street Mall, where he and his friends go to get their favorite 50 Cent or Bob Marley albums. Being able to get to a record store is essential for Victor, who spins as DJ Ponji—named after his mother’s father—a venture which for now consists of four crates full of records marked with Braille labels, two turntables, some volunteer gigs, and a love of music.

Ms. Barbier likes the trip to Beat Street for training purposes because it’s a manageable one: a three-block walk from Victor’s apartment building, a 10-minute ride on the B38, and then a three-block walk through Fulton Street Mall.

The lesson starts outside Victor’s apartment building on a sunny afternoon. Ms. Barbier instructs him to catch the bus, go to the record store, and return home unassisted. She will follow behind him, but if he needs help he is to ask a stranger on the street, not her.

“You are going to be responsible to make good decisions every single time you leave the house,” Ms. Barbier tells him. “Of course!” he responds, a little too quickly.

The blind confront barriers that the sighted avoid as easily as water flowing around a rock. There are the stationary objects whose placement can be memorized over time: mailboxes, fire hydrants, parking meters, subway entrances, steps, grates, awning poles, potholes, uneven pavement, and wheelchair curbs. There are the seasonal objects: temporary winter vestibules that jut into the sidewalk and piles of snow that accumulate and then melt. There are random entities that constantly change: scaffolding poles, restaurant inventory being loaded and unloaded, cold wet puddles—and people, people everywhere. All of this is to be navigated by touch through the scuffed tip of a walking cane or the subtle movements of a guide dog.

Most New Yorkers move within circles of familiarity. For the blind, these can be small and limiting. Explaining that there are “route travelers” and “independent travelers,” Ms. Barbier says Victor is one of the first group: like most vision-impaired New Yorkers, he is confined to learning a route—point A to point B—and strictly adheres to it. Each expansion of the sphere offers a chance for invaluable autonomy.

“Everything by the book, Victor,” Ms. Barbier tells him as they set off, her short auburn hair shining in the late afternoon light. She is a practical woman, down to her comfortable shoes. “Everything by the book!” Victor echoes, his voice drifting off as he moves ahead of her at a fast pace, his cane sweeping in broad arcs before him.

Victor’s movements are mostly surefooted, but they are erratic enough that even when people try to make room for him, which they do, his cane occasionally gets wedged in the wheel of a baby stroller or trips up a pedestrian. At other times he freezes motionless, something—a slope of a sidewalk, an unfamiliar sound—disconcerting. Then his inner compass finds its bearings, and he’s off again, most times in the right direction.

Ms. Barbier is concerned with Victor’s “consistency,” as she puts it, and today’s lesson will determine whether she gives him the official OK to travel independently. If she sees that Victor is still prone to making rash decisions, especially regarding street crossings, she will withhold her approval. Victor admits later that traffic is his greatest fear.

One block from home, Victor reaches the intersection of Lafayette Avenue and Classon Avenue and stands poised to cross as the light passes through two cycles. Other pedestrians pass him with a casual look over their shoulder and a glance of eye contact with oncoming drivers, establishing in a fraction of a second who has the right of way. He sighs. Listening to the low flow of traffic, he finally turns back to Ms. Barbier, and gestures, frustrated, toward the intersection.

Traffic, both people and cars, while presenting multiple dangers, can also act as an audible cue; a conduit through which to travel. A surge of motors all going in the same direction indicates a green light for the cars and, at most intersections, a walk signal for pedestrians. Likewise, the sounds of footsteps and people talking indicate a flow that can shield a blind person’s movements, providing safety in numbers.

Of New York City’s 153,738 corners, only 11 intersections have crosswalk signals that are audible (chirping) or accessible (talking). Ms. Barbier, who has testified before the city council’s committee on transportation, feels hopeful that more will be forthcoming, but financial constraints remain. Craig Chin, assistant press secretary for New York City’s Department of Transportation, said that adding signals in a city as old as New York can be physically difficult. Things get in the way, he said: “street furniture’’ such as fire hydrants and doors to underground cellars prohibit adding audible signals at many crosswalks.

The blind know about things being in the way.

On the corner, Victor asks for help from a passerby, an acceptable but not always available way to cross a street, and readily receives it. A moment later he is standing at the bus stop as the B38 pulls up to the curb, but he cocks his head to the side and asks aloud, “Is that a bus or a truck?” The bus driver eyes Ms. Barbier, who stands unresponsive behind Victor, and chides her, “Why don’t you help him?” He then welcomes Victor on board and they chat up front. The bus is plastered with advertisements for the ABC television series “Blind Justice,” announcing to New Yorkers in large letters: “He lost his sight but not his vision.”

“I’ll look out for you,” the bus driver says as Victor disembarks at the Fulton Street Mall. Victor passes Junior’s Restaurant, smelling the food and announcing he’s hungry, and approaches the intersection of Flatbush and DeKalb Avenues, which is daunting even for sighted people. Flatbush is a divided multilane thoroughfare, jammed with cars, buses, trucks, and taxis, many turning onto one-way DeKalb, the smaller avenue that Victor needs to cross in order to reach Beat Street. Ms. Barbier has talked to Victor about “negotiating corners,” but he hesitates and spins, losing his bearings, and heads off in the wrong direction. Fifteen minutes later, he is back at the same corner, frustrated and disoriented.

The day was beautiful when Victor left home nearly an hour ago. He can’t see that the late-afternoon sun has disappeared behind the Brooklyn skyline and the sky has clouded over, but he feels the cool air setting in. As he and Ms. Barbier talk about what is going wrong, he pulls a black knit cap from the pocket of his jacket and slips it on his head, holding the cane in the crook of his elbow.

Unable to differentiate turning cars when he has the walk signal from the flow of traffic when he doesn’t, Victor finally accepts a man’s offer of help, and the Samaritan leads him across DeKalb, against the signal and with traffic approaching. The next two smaller intersections are easier for Victor and, within minutes, he stands at the door of Beat Street Records. The journey, over all, has not gone smoothly.

Ms. Barbier’s judgment comes a week later. It is a compromise of sorts. She has agreed to let Victor travel to the Fulton Street Mall alone, but he has to ask for help crossing the streets. It is a permission granted to 10-year-olds in this city, and Victor has been working to earn it for five months. When asked if he’ll continue training, he insists, “I’m done. I’m done.”

Not long after Ms. Barbier’s ruling, Victor got a part-time job answering the phone at the Greenwich Village offices of Housing Works, a nonprofit agency. But when asked if he had made the trip solo to Beat Street Records since the completion of his training months earlier, he admitted that he hadn’t. “There’s hoodlums out there and they’ll beat you up,” he joked as he leafed through take-out menus, his easy, continuous smile all the more engaging because of the dark glasses hiding his eyes.

He went back to tracking down the number for a nearby Chinese restaurant. “If they deliver,” he pronounced, “I’m good.”

Meera Subramanian writes about culture and the environment and lives in Brooklyn.

Most of the works in Youth have a reflective quality that transforms visitors into potential avatars of Narcissus.