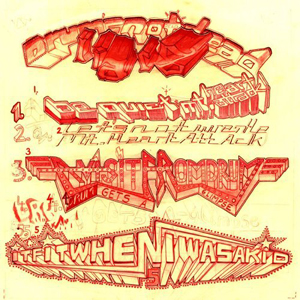 The head album. A relic from a bygone age. Sleeves adorned with lunar landscapes as seen through a looking glass while synapses fired—nay, melted—due to disturbances best described as…chemical. Synaesthetic gateways to the center of your mind. Guitars and drums—loud. Songs about things you’ve never touched, tasted, or seen but understood all the same. That was then, this is now. CD booklets? Downloads? They don’t stake quite the same claim to the brain. The landscape’s changed, but bands still try to map it. Case in point: Liars and Secret Machines.

Liars and Secret Machines—and I’m not talking politics, but two cannabizarre bands on a journey to the outer limits by way of Brooklyn. The former, former dance-punk runts, did what rockers with aspirations to high aht so often do: They bunked off to Berlin. They returned with a dizzying, droning concept album where the conceptual continuity becomes apparent only after you’ve been told it’s there and even then nothing really makes sense. The latter, latterly of Austin, Texas, provide a sleeker, shinier ride. Hi-res satellite images sent from the glowing heart of the sun—an approach neither greater nor less than, but also not equal to the Liars’ mucky, muddy murk.

Cover comparison: Secret Machines’ Ten Silver Drops. Ten silver drops arrayed against a green backdrop, set in the shape of a triangle. How many triangles can you make by drawing a line and connecting the drops? Ten! The universe is nothing if not a pattern. Your turn, Liars. Drum’s Not Dead. Malapportioned lettering the color of clay. No brain-teasers here—only typography copped from some Lascaux teen’s bored doodlings after having seen The Bride Stripped Bare exhibited in a cave some 25,000 years ago. The two records’ song titles also signify: “Alone, Jealous, and Stoned,” “Daddy’s in the Doldrums,” and “I Hate Pretending” vs. “Hold You, Drum,” “To Hold You, Drum,” and “You, Drum.” Secret Machines’ titles tell you what it’s all about. Liars titles barely even speak. 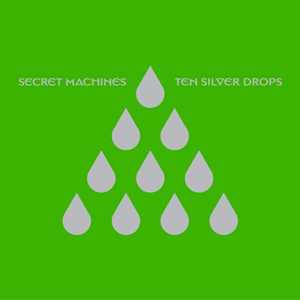 We’re talking capital-H Head albums here, folks. Or as close as you’re gonna get without a seed-ruined spine, a lava lamp, and a new vinyl slab from the Sabs—a band whose frontman, a babbling Brummie named Ozzy, suffered the indignity of having it pointed out by a certain English rock rag that he, at a low point, was fighting a losing battle with “flab.” While their shared interest in being far-out mark Secret Machines and Liars as following in the bong-splashed footsteps of the mighty Sabbath, I can safely say that our onetime Brooklyn boys are not, in point of fact, fat. They can’t even muster a gold record’s worth of sales between them.

But where’s your head at? The crowd calls for further comparison: perfectly calibrated, enamored with the technical possibilities of magnets, transistors, and circuits, Secret Machines don’t even have to blast off—they start out in orbit, traveling at the style, if not the speed, of light. Guitars twinkle like stars, motorik drums zoom down the Jovian autobahn, a thin, Flaming Plant of a voice sings tales of unity, memory, and drug busts. Keyboards extend like the tail of a meteor passing by at warp speed. The ghost of a Beatle hovers; the hollowed out hull of a Zeppelin glimmers on the horizon. Both are illusions. Space Rock as Space Odyssey. Warmer than Kubric’s Arctic future, but with half the vision and twice the fat.

While Secret Machines are busy trawling for intergalactic understanding, Liars are up to their necks in the muck and mire of planet Earth. Drones, negative space, and drums, drums, drums. The title doesn’t lie. The Liars’ rhythms are the stomping of boots on cobblestone on Walpurgisnacht, they’re the march to the witch’s sabbath, they’re the inhabitants of Skull Island signaling to Kong that supper’s ready. Even in the rare moments when the drum onslaught subsides, steady, eerie drones ensure there’s no room to breathe. If guitars are here, they’re either buried or made to sound like anything but guitars. The largely indecipherable lyrics aren’t so much sung as intoned. Fleeting snatches of melody shine through the tumult like light squeezing through cracks in a mineshaft. It’s all so very pretentious, rough, ugly, and stressful, until the last track, “The Other Side of Mt. Heart Attack”: four minutes and forty-five seconds of gentle glowing truth that anyone with a functioning set of ears and a beating heart should be able to understand.

If you want to hear that last track fulfill its promise, don’t download it—your appreciation of its warm brilliance is contingent upon your wading through three quarters of an hour of primordial ooze to get to it. But if you’ve already given up on gesamtkunstwerk, then Ten Silver Drops is probably more your speed anyway. Drum’s Not Dead demands physical labor, but it culminates in something wonderful. Ten Silver Drops offers assembly-line transcendence. Get grokking.

DAVID MARCHESE is a writer and graduate student living in Brooklyn.

Edges are limits. Limits are exposed through questioning. Uncovering and questioning limits in painting is a process that is akin to questioning the limits of the social, political, and personal—working painting at the margins or the center; top down or bottom up; visible or invisible; surface conditions and underneaths.

Politics may, as Karl Marx suggested, be an epiphenomenon resting on the “economic foundation” of society, but still have interesting things to tell us. The Democratic Party seems—I write this in the aftermath of Super Tuesday—to have successfully eliminated Bernie Sanders as a candidate. This was the work not just of party officials, who made no secret of their intention to control the nomination, but also of the voters, who in most places stuck with the old political machinery.