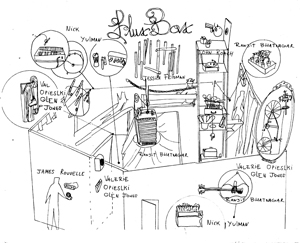 The crank on the side of a wind-up toy or a music box is not just a mechanical device that sets things in motion; it is a generator of suspense. You give it a few turns and the tension mounts. When you get to the point where you can’t wind any further, you let go and wait through an expectant pause until—snap!—the magic begins.

The FluxBox, which was on view at the Flux Factory in Queens from March 25 to April 29, triggered a greater feeling of suspense than your everyday automata. Not because it was a room-sized version of something that usually fits in your hand, but because the only visible part of the box from the entrance was the crank, and the crank was wired to a kosher pickle. 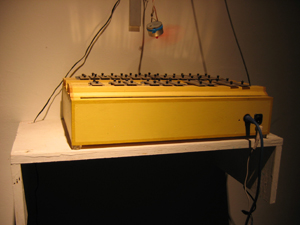 I knew to expect a “giant, interactive music box”—the collaborative handiwork of seven visual/sound artists whose individual “kinetic sculptures” were linked together to play a song. I imagined something like a Rube Goldberg-esque jukebox. But I was thrown off by the lab-experiment/corner-deli aspect of the crank (created/conceived by James Rouvelle). If this is on the outside, then what is on the inside?

The only way to find out was to crank the pickle. Unlike a mechanical system of gears, the crank turned without much friction. My memories of sixth grade science class were kicking in: “Ah, yes, the crank is generating the electricity—the kind that keeps a potato-clock ticking—and this will start the action.” So my last few turns of the crank slowed down, not for lack of capacity, but out of fear that this pickle I was charging up was going to explode. 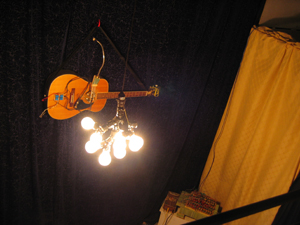 Then the suspense. First, a couple of clicks and then the box started up like the sonic equivalent of a calliope piping away from inside a construction site. A distinct melody soared through the texture, but equally prevalent were thick rhythmic layers of mechanical sounds—the audible by-products of the melody.

Once inside the maze of small rooms, the sounds came alive, often with a sly gesture. The most fascinating instrumental “performances” came from Ranjit Bhatnagar’s suspended accordion, which played when its bellows were raised and lowered by pulleys, and John Roach’s toy organ, which remained silent until the pointed finger of a slowly descending hand struck a single key.

As a whole, FluxBox brought out a whimsical curiosity for those inside of it. We ducked under and around things to scout out certain sounds and see how they were being made. Sometimes our path was guided by sight, other times by sound, but either way it was a colossal feeling to be encompassed by the structure of its sounds. 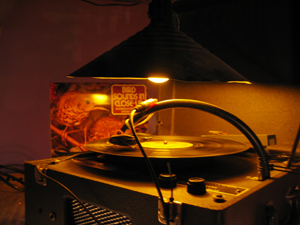 This explosion of miniature onto a grand scale distills down to one melody: the “Tea Cup Song” written by Stephany Anne Goldberg, executive director of the Flux Factory and director of the FluxBox project. In conceiving the piece, Goldberg first gathered the artists who would work together, and then they were to make the collective decision of what the FluxBox should play. Goldberg was looking for something “compact, melodically identifiable, and easily repeated,” but wanted to leave territory open in terms of original music or covers.

John Roach circulated some ideas from his music collection on a CD-R that became known as “Flux for Thought,” but in the end, they decided on one of Goldberg’s original melodies from a separate installation. In that piece, the song functioned mechanically: Goldberg had her tune manufactured into music-box parts that she affixed to teacups. 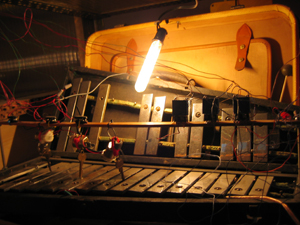 The counterpart to the suspenseful onset of a mechanical work is the gradual decay. As the FluxBox metaphorically “wound down” you found yourself inside of it, dark and quiet, until someone would shout “Pickle!” and after a shuffling of footsteps, the box would come alive again.

As it turns out, the pickle’s only function was cleverness. The sound devices inside the FluxBox were triggered through the program Max/MSP…by a computer that was kept out of sight. The speed and length of time that someone cranked the pickle determined how fast and how long the FluxBox would play, but the electrical current came straight from the wall. Did this trick take away any of the magic? Not at all; it gave the box its flux-colored lining.

Bethany Ryker is a writer and musician living in Brooklyn. Her radio program, the "Stochastic Hit Parade,” airs weekly on WFMU. She is currently completing a masters thesis at The New School for Social Research on the aesthetics of mechanical music in the digital age.

One of the most intriguing exhibitions of recent years is Liliane Tomasko: Evening Wind at the Edward Hopper House. Scattered somewhat randomly upon the walls of Hopper’s living room and dining room in Nyack, the abstract painterly marks on surfaces of paper, notwithstanding their aggregation of luscious streaks and seductive palettes of subdued and brilliant hues, register as self-contained entities. Yet the seeming abstractions of Tomasko, framed within her overall body of work and the context of Hopper’s self-absorbed human figures, translate as conduits to the perceptual states of the human subject, as cryptographs of the subconscious, as passages toward the unconscious. These works compel us to reconsider the referent of the term “abstraction.”

from Floodgate of Wind

By Antonella Anedda Translated from the Italian by Eleonora Buonocore

Antonella Anedda is an Italian poet. She teaches at the University of Arezzo and is the author of numerous books of poems, essays, and translations.