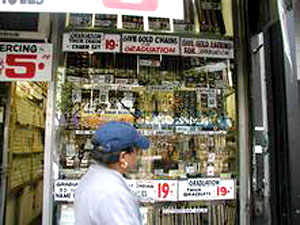 “I wouldn’t hang out in a yuppie environment because in those places they jack up the prices. If people are dumb enough to pay so much money for a cup of coffee, then that’s how they are—”

I was talking to Joe, a sharp Italian-American salesman from Queens, who for a moment was interrupted by a couple of black teenagers wanting to play some records before buying them. He explained to them in a tone that was familiar yet firm that the store’s policy had changed.

“—but even affluent people need a space,” Joe continued.

Joe works at one of the increasingly endangered mom-and-pop stores on the Fulton Street Mall, a vibrant, eight-block pedestrian strip in downtown Brooklyn between Flatbush Avenue and Adams Street. At one end stands the beloved landmark restaurant, Junior’s; at the other, Borough Hall and a cluster of courthouses and lawyers’ offices provide a buffer between downtown and staid Brooklyn Heights.

Throngs of pedestrians—mostly African-American and Caribbean immigrants—crowd the Mall daily come rain, hail, or shine to shop and socialize. Elderly Jamaican women dressed in bold floral prints and pastel hats perch on the edges of tree planters to talk as they wait for services to begin at the Brooklyn Tabernacle. (Proper benches were removed several years ago due to rot, according to the Metrotech BID. They were never adequately replaced).

Black shoppers here frequently regard Manhattan shopping districts such as 14th Street and 34th Street as “white,” while viewing downtown Brooklyn as catering to black styles. Many also regard the area as an important public gathering place for blacks from all over Brooklyn—a kind of black melting pot. The area is also known as a deal mall, drawing bargain-hunting shoppers from as far away as New Jersey and Westchester County.

But like many other beloved local spaces, the survival of Fulton Mall is uncertain. The city’s Downtown Brooklyn Plan, a major rezoning passed in 2004, sets the stage for the Metrotech office core, already breathing down the mall’s neck, to creep in further. This has emboldened profit-minded landlords and developers, and rents are already being raised by as much as 200 percent, forcing out small businesses, many of which have been on the site for decades.

As Al Laboz, a chairman of the Fulton Mall Improvement Association and a property owner on the mall, recently told the New York Observer: “I want to make Fulton Mall into 34th Street, where it is strong retailers giving a quality shopping experience.” Laboz was referring to 34th Street in Manhattan, which is lined with chains like Express, Banana Republic, H&M, and Victoria’s Secret.

For the moment, the resemblance between Fulton Mall and 34th Street is mostly superficial. A few of the stores are the same—Forever 21 and Jimmy Jazz—but where 34th Street has a transient and anonymous vibe, Fulton Street has a community. On 34th Street, people clog the sidewalk looking at maps and wearing geeky visors. They board the Big Apple Tour Bus with expressions of disorientation and awe, and mill about photographing the Empire State Building. Locals come to shop, and escape. 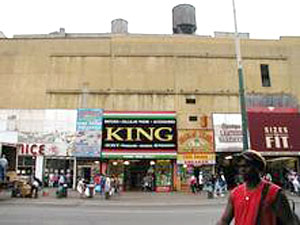 The kind of vivacious social interaction that animates the streets at Fulton Mall just doesn’t happen on 34th Street. At the same time, many white, middle-class neighbors fear the Fulton Mall as dirty, unsafe, and dominated by throngs of black teens sporting ghetto fashions. The presence of homegrown stores selling gold fronts and wigs keeps many of these shoppers away. Much has already been made in the press of a downtown Brooklyn resident named Ursula who, at a recent panel at the Municipal Arts Society concerning the Mall’s future, asked what urban planners intended to do to make the area more attractive to whites. According to Michael Burke of the Downtown Brooklyn Council, the “chaotic streetscape” sends some first-time visitors into a state of shock.

Kevin, 41, grew up just a few blocks from downtown Brooklyn and has been active in efforts to stop the hyper-gentrification in Williamsburg. But he says he’s surprised that anyone would advocate for a few blocks of run-down discount stores. “I never really thought about the Fulton Mall as something anyone would want to save,” he says.

But Fulton Mall is a place with the kind of soul that is nourished unassumingly over decades, and it is worth defending. Like other historically black downtowns such as South State Street in Chicago, Pennsylvania Avenue in Baltimore, and 125th Street in Harlem, the history of Fulton Street is complex. During the 1960s, department stores, which served a largely white, European immigrant population, began to disinvest as more and more black customers arrived. This spurred a period of economic decline that transformed the area into a ghetto shopping center. In the early 1980s, the strip was transformed into a pedestrian mall as part of an urban renewal effort that was supposed to attract a whiter, more upscale clientele.

Today, Fulton Mall remains a bustling hub of African-American economic, political, and social activity. It is also one of the city’s most successful public spaces, where shopping and social life mix to produce a dynamic ballet of the streets. It is a grassroots space, where social networks have formed over generations. Shoppers know the merchants; people feel comfortable, at home. Shoppers worry less about being ignored, treated rudely, or followed around in stores by suspicious managers.

“I’ve got every bit of 40 years downtown,” says Rahsun, an African-American man who grew up in Brooklyn and who has been coming to this part of Fulton Street since he was a kid. “I remember there was this older black lady, very proud, used to sew quilts in front of Macy’s. All kinds of colors, and then there would be these fantastic borders. You’d come by on Tuesday and then by that Friday you would be like wow, look at that thing! She just disappeared after they took away the benches.”

As Rahsun walks down Fulton Street, he greets people warmly—at least ten people seem like cousins, old friends. Hearty handshakes or brief hugs are exchanged. He stops at a table selling homemade CD’s of speeches by Malcom X, Martin Luther King, James Baldwin. “I remember a man [here] who used to share the Bible with passers-by,” says Rashun. “He would have a little class downtown attracting young and old people. He wasn’t one of those guys who come downtown and try to recruit—he would have as much fun reading it to himself as he would reading it to others.” Rahsun also remembers the Mexican shaved ice carts—“real good handmade stuff, and they started pushing these people out. I mean, come on, this is an Icee!”

Janelle Williams, a 24-year-old student at Hunter College, remembers shopping for books on Fulton Mall as a girl, with her father. Now she mostly visits with her mother or with friends to buy clothes. “The stores are like little secrets, and reasonable,” she says. “Unlike Macy’s and Old Navy, the mall has stores that might not have been heard about by everybody. People say, ‘Where did you get that?’ all day.”

Talk to just about anyone at Fulton Mall about their memories and experiences and it becomes impossible to dismiss it as purely a place of crass commercialism. Beyond the unsightly blue gates that don its entrances, a community spins out the rhythms of everyday social life. What draws people here may be fashion, but it takes a while to realize why people say that word with such relish: style is just part of the performance. The activity of seeing, and being seen, breathes life into a public space and gives Brooklyn heart. It’s about identity, memories, and dreams.

New York City is caught up in a revival of urban renewal mega-development not seen since Robert Moses. Today, however, “economic development”—rather than slum clearance—is the name of the game. To some Brooklynites, Deputy Mayor Dan Doctoroff’s grand vision for “the borough with an image problem,” as it was coined by the Regional Plan Association in the 1980s, seems like an opportunity for the achievement of world-class city status. Brooklyn has long resided in Manhattan’s shadow, and Doctoroff’s plans would shed this underling status once and for all. Others aren’t sure of the need for such modernist impositions on neighborhoods that have already been brought back by the private market.

At the Fulton Mall, people are concerned about how these projects will affect their community. There is a sense that much is at stake. Some have been around long enough to recall the destruction of the urban fabric and community life wreaked by urban renewal in the old days—“negro removal,” as some African-Americans say. To the extent that Brooklyn is experiencing a second wave of this approach to development, there is also renewed unease about the survival of the borough’s most beloved neighborhoods and public spaces.

“What happens now?” wonders Rahsun. “The diversity of these neighborhoods is changing fast. I see an imbalance starting to happen. The first job I had was on the corner of Livingston and Bond Streets. One of my friends’ older brothers made me a shoeshine box, and I bought me some supplies of my own. Then I used to sell roses downtown for 50 cents a stem, and that was money.”

“There are a lot of people like myself who just can’t see leaving,” says Rahsun. “All we know is downtown, and I don’t think they want that any more.”