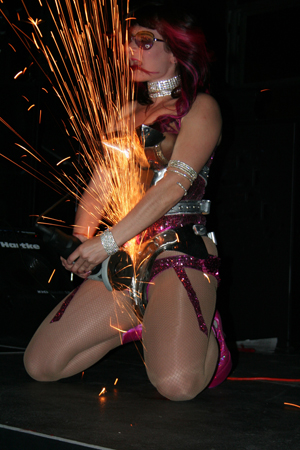 Zigun, in his fifties, with a graying goatee, a bowler hat, and arms a tattooed canvas, is standing before a crowd of supporters, board members, and fans of Coney’s hip brand of freak-show chic—the dress code for the recent benefit held at Crobar. Visitors are brushed by sideshow performers and half-nude mermaids as they thread through the motley but friendly crowd.

The event is being held to raise money to buy a building for CIUSA’s new headquarters, to prevent being priced out of Coney Island by rent inflation. The organization—which runs the sideshow, museum, burlesque, and the upcoming Mermaid Parade, is in talks, according to museum curator Aaron Beebe, to buy the Child’s Restaurant building which the foundation has long occupied. The current lease will end within the year.

“We’re involved in ongoing discussions with the Mayor’s Office and the Department of Cultural Affairs,” says CIUSA managing director David Gratt. “If we make it into the budget, we’ll know in the beginning of July.”

Last year, retail developer Thor Equities went on a Coney Island shopping spree, buying properties on and around the boardwalk in a district which for nearly 100 years has been run by small businesses and individual property owners. By the end of last year, the implications of Thor’s acquisitions and hubristic plans to fabricate a luxury year-round resort destination of Coney Island had been covered extensively in the press. Concern has been voiced from the long-established small businesses in the area and from those among Coney’s arts and culture revival, which one could say began more than 25 years ago with the founding of CIUSA.

“We are happy to work with Thor in any way we can to help them understand the history and mythology of Coney Island,” says Gratt. “We have offered to consult for them on issues like the look and feel of any proposed development and in helping research history for them to draw from.”

The city’s initiatives for redevelopment, led by the Bloomberg-appointed Coney Island Development Corporation, have been preservation-oriented, most notably with the completion last year of the Stillwell Terminal building—which retains some of the original terra cotta façade and serves as a transit hub and retail arcade—and with last summer’s announcement that the historic B & B Carousel would stay in Coney Island. CIUSA has succeeded in demonstrating to the city the organization’s crucial role in Coney’s arts and culture, and in promoting the success of the Mermaid Parade—and attractions like distortion mirrors, Eak the Geek, and Ula, the pain-proof rubber girl—in drawing crowds to boost local business.

“The arts can be a tough sell to the city, and it wasn’t easy, but we have proven to be the center of this revived interest,” says Beebe. “When we have the Mermaid Parade, 500,000 people come to Coney Island. We’re the only ones down here who can draw that kind of crowd.” Beebe, who came to CIUSA as a volunteer in 2001, found the museum at that time to be little more than a storage area. He worked to revamp the space and raised enough grant money to reopen the museum and earn a full-time salary. 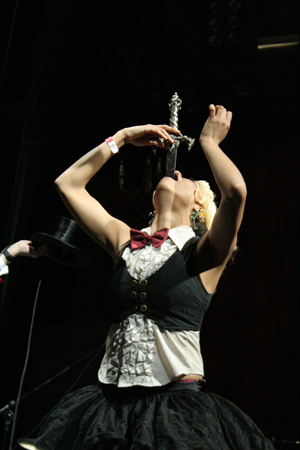 Private development won’t begin in Coney Island until well after the city-appointed consulting firm hands in its zoning assessment—and that won’t happen for at least a year. Then the plans will be publicly proposed to the city and to the community. The area in question runs from West 12th street to West 15th, between the Bowery and the boardwalk.

Zigun opposes rezoning because of the area’s tradition as a noisy, fun-filled spot. “Coney Island was zoned for things that were too loud and outrageous for other neighborhoods,” he told the Daily News late last year. At the time, his insistence that new residents might find Coney’s color and chaos inhospitable was a plea for survival, but it can also be read as a solid defense of what has defined Coney Island for a century.

Thor Equities CEO Joe Sitt, being a local boy (he grew up in nearby Gravesend), has his own ideas about what Coney Island wants, and deserves. Upon graduating from NYU in the late ’80s, Sitt bought his first property: an abandoned storefront in the Bronx. He went on to pioneer the practice of opening box stores in inner cities, and created the Ashley Stuart clothing brand for the upwardly mobile black woman—a market Sitt says was underserved. He also moved Target and Toys R’ Us into the Terminal Mall on Atlantic Ave, a property he purchased from Bruce Ratner, who was allowing it to deteriorate.

Sitt’s Coney Island project is about buying and selling the Coney Island brand, which in real estate is a relatively new practice. Sitt says the renewed success of vintage brands like Izod is proof that one can find success with “vintage” in real estate. But what will the Coney Island logo be, in Sitt’s development world? It may be telling that Sitt compares himself to Las Vegas speculator Bugsy Siegel.

Coney Island USA is certainly about branding too. Their cartoonish logo of a smiling, pre-war beach barker invokes nostalgia for an antiquated pop culture buried in our national consciousness. But there’s no suggestion here of multinational sponsorship—this is a badge of service rendered. The folks who run CIUSA embody the character of what they work to preserve; their nostalgic sensibility is at the center of what they sell. At the opening day for the Circus Sideshow and Coney Island museum in April, passers-by on Stillwell Avenue saw Twisted Shockmeister Scott Baker strut in the pre-war carnie garb of top hat and coattails, then casually hammer a heavy-gauge six-inch nail up his nasal passage before introducing young Heather Holiday, the petite sword-swallower (the youngest female participant of the trade worldwide), who the crowd could see in action if only they would pay the four bucks to follow him inside.

Corporate development in Brooklyn neighborhoods tends to happen only after small businesses begin to thrive and independent fixer-uppers flip enough homes to whet the fat cats’ appetites with their disposable income. In south Brooklyn, this trend is evident with Red Hook’s looming IKEA and Ratner’s plans for Prospect Heights. In Coney Island, the success and prevalence of arts initiatives has brought a blend of yuppies and countercultural revelers to converge on the salty boardwalk.

Beebe’s description of CIUSA’s plans for the new museum, performance, and art space—intended to go underway once they own a building—envisions a stable of revolving retail/studio stalls for artists to work in and exhibit from, in the Coney Island tradition of small vendors occupying small lots. In part this is an updated nod to the commercial framework that serviced the fabled “Nickel Empire” before the war, when upwards of one million people per day would descend on Coney Island via the five-cent subway ride.

Local businesses and property owners were successful over the years in blocking land grabs because they kept lot prices well above market. Sitt is the first speculator in recent history, as Beebe points out, who has been willing to meet those prices. The developer may hang onto already acquired properties along the boardwalk while CIUSA continues their work—work which will unavoidably increase the appeal of the area to new residents who, in 2008, might be looking at condo floor plans. Of course the organization is conscious of the irony: last year’s Haunted Freakshow, which played for a long Halloween weekend, featured a zombie Starbucks and condo mausoleums with the caption, “The rent is killing me.”

When CIUSA’s rent was doubled last year, Zigun was telling the press that if the organization was priced out then it would disappear. But this year, on the strength of contributions and the promise of municipal support, board members are insisting that they will never be priced out of Coney Island. “We’re not gonna get priced out,” says Gratt. “We’ll find a way to make it work.” To share their view means to see no end to freak-shows and mermaids: their tongue-in-cheek irreverence, heightened by artistic inspiration, is Coney Island-bred, and one is hard-pressed to see it go over on the Jersey shore.

Sometimes, according to Beebe, people call the museum asking if they’re still open; if they’re still there. “They” as in the theme park, the rides, the Cyclone. “People think we’re, like, Coney Island,” he says. This month, when the mermaids come out of the woodwork and pilings—the debris of a century—and a crowd of more than half a million pay homage to Coney Island’s long forgotten Mardi Gras with the 24th annual Mermaid Parade, that will certainly be true.

It was midday and the rain fell in torrents. The Seine, swollen by the continuous downpour, had risen to a dangerous height and flooded part of the wharf. From time to time, Rodolphe glanced impatiently at the toll gate. Finally, in the distance, he saw a man and woman advance behind the shelter of an umbrella. He recognized the Schoolmaster and the Owl.