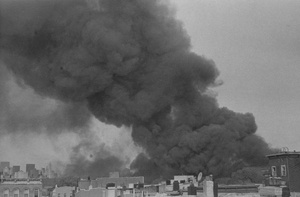 “Swan in the Bushwick Inlet as the fire rages in the background” (2006). Photograph by Anders Goldfarb.

Demo and his friends called the abandoned warehouses along Greenpoint’s West Street waterfront “The Alamo” and “Castle Gray Skull.”

“Hood-names,” Demo said as we sat at American Playground, a park one block east from where the Castle once stood. Demo is a tough-looking guy with a gentle voice. He is in his thirties and grew up in the neighborhood. As a kid he played manhunt in the vacant Greenpoint Terminal Market. He chuckled as he remembered tracking down his friends, crawling through secret passages that led from building to building. He climbed up ladders, squeezed through holes, and sometimes even got lost. It was a teenage paradise in a neighborhood that didn’t have much to offer—no outdoor pool, no movie theatre, no boardwalk or riverside park. Castle Gray Skull was Demo’s secret adventure park.

“My name was on the walls, you know what I mean?” he said.

On May 2nd, Castle Gray Skull burned down. It took ten engines 36 hours to quash the blaze. In the end, six buildings were turned to ash and skeleton, and four more were damaged. Brooklyn cynics I spoke to irreverently called it “our own little 9/11.”

Philip DePaolo, an activist from The People’s Firehouse—a tenants’ rights and public safety organization in Williamsburg—called the fire “sad and predictable.” The city closed Engine 212 in Greenpoint in 2003 after budget cuts. “To close firehouses in an area of development means you invite arson,” DePaolo said. It took Engine 238 at Greenpoint Avenue six minutes to arrive at the scene of the Terminal Market fire. “Engine 212 would have been there in three minutes,” said DePaolo. “Response time is the key. When an arsonist hears sirens, he drops what he’s doing.”

The fire is widely suspected to have been a quick-fix for developer Joshua Guttman, who was trying to sell the property. While he and other future developers might have had luxurious condominiums in mind for the site, the Waterfront Preservation Alliance and the Municipal Arts Society were calling for the warehouses to be designated city landmarks.

The cause of the fire is still unclear, but the incident is only part of a much bigger problem. Greenpoint’s infrastructure is not equipped to cope with the neighborhood’s recent population jump. The closest hospitals are Woodhull Hospital in Bushwick and Bellevue Hospital in Manhattan; schools and subways are congested with newcomers; and the neighborhood lacks a waterfront fire company that would be able to serve the East River high-rises to come.

When I spoke to people in the neighborhood about the fire, I expected conspiracy theories—but the only person to imply that “there was more to it,” was the mailman. “I can’t tell you what really happened,” he told me, “because I’m in uniform.” He was quick to admit, though, that he has never been down to the Greenpoint Terminal Market, which is one block west of his route. 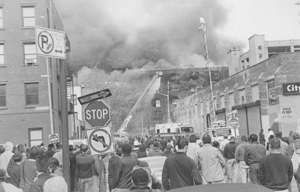 “There was no mail to deliver because the warehouses were empty,” he said.

The morning of the blaze, the wind churned smoke southwest along Franklin and West Streets. At a bodega on the corner of Milton Street, the chubby young clerk explained that he was afraid he’d lose business when the fire started. “But in fact,” he said proudly, “we gained.” Firefighters would stop by several times a day to buy coffee and snacks. “They would tell me all about it,” the clerk said. From the store, he could see how the façade of one burning warehouse dangerously tilted before crumbling to the ground.

Hanna Matejowic also worried that she’d lose business when she unlocked her shop, Hanna’s Skin Care, amidst howling sirens, helicopters, and pitch-black smoke that morning. Luckily the smoke quickly dispersed southwest. One of Matejowic’s clients pointed to the East River with nail oil dripping from her hands. “Was no problem,” she told me. “All the smoke went into Manhattan.”

Matejowic’s face lit up with a big grin. “The firefighters came here all the time,” she said. “To get their nails done?” I asked. She laughed. Matejowic had the closest bathroom to the fire.

American Playground is a rough little park with asphalt grounds, a few vulnerable looking trees, a basketball court, and a playground. Maureen Degaetano and Kelly Zawistowski sat on a bench chatting and watching their children play. The women grew up in Greenpoint and remember when they used to climb around the cracked piers by the Terminal Market. Zawistowski spread her hands wide apart to demonstrate the size of the holes in the pier. “If our mothers only knew,” she said. 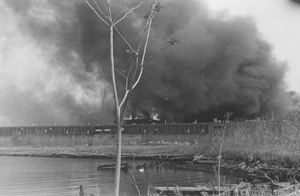 “From 1072 Lorimer St. between Calyer and Meserole facing West” (2006). Photograph by Anders Goldfarb.

Degaetano giggled, her thoughts drifting to the past. But catastrophes are turning points, and the women began to contemplate what was to come for Greenpoint. They said they don’t want to see high-rises in the neighborhood. Greenpoint has always been part residential, part industrial, and the women would like it to stay that way. “We like the ugly old houses better than the ugly new ones,” Zawistowski said.

Across from the playground, Richard Ortiz was playing basketball. Ortiz, a fit man in his late twenties with a sharp, persuasive way of speaking, also grew up in the neighborhood and now works at Williamsburg Charter High School as a counselor. He lamented the lack of activities and space for children in Greenpoint. He said he wants the landmark to be rebuilt to house basketball courts and a counseling center for children.

“We never had that as kids,” he said.

From nearby Oak Street, makeshift walls and police barricades could be seen boarding off the ruins of Castle Gray Skull. The smoke-stained front wall of one building remained, and the skywalk which once connected two terminal buildings now rested crookedly with one end on the ground and the other balanced on rubble, like the broken cabin of a crashed, burned-out airplane. A sky-scraping mound of colorful clothes was piled in front of the façade—the remnants of what had once been stored inside the warehouses.

Karen Pearson, a photographer for hip-hop magazine Elemental, decided to take advantage of the scene’s strange appeal. “I was planning to do a fashion shoot here before it all happened,” Pearson said, “but now I have the bonus of the clothes.” Her photo model wore green, blue, and red ribbons in her hair to match the clothes piled before the ruins behind her. The model’s smile looked incongruous against the grim background. 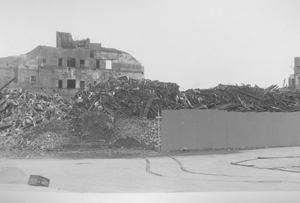 Around the corner on an open lot, two dreadlocked poodles were busy scavenging for the food that an old, scruffy man had dropped on the ground. The man’s socks hung over the fence, drying in the sun, and stuffed animals sat on the branches of nearby trees. The man—who lives in a pick-up truck and is a neighborhood fixture—told me to invent a name for him. When I asked him why, he shrugged and said, “The story is real, but the book is fiction.”

Let’s just call him Martin. It was difficult to follow Martin’s answers to my questions, and not only because of his thick Polish accent. “Everybody asks about the fire,” he said, “but no one wants to listen to me.” I said I would.

If America created an inventory of each and every building, Martin said, people would learn to value history and to protect its architecture. “It’s like giving a Stradivarius to a cab driver,” he told me. “He won’t appreciate it either. You got to teach people appreciation.”

“Writers—writers like you,” Martin said, “should go out and record everything that happens in the community to gather evidence of the importance of everything the community has to offer.” Writings, photographs, drawings, measurements, calculations and charts—his list went on and on—would protect our architecture from being forgotten or disregarded, he told me in his own scattered way.

I think what Martin meant was that even empty buildings house stories, and that these stories are worth telling. The fire was Castle Gray Skull’s last story. When it burned down, Greenpoint’s colorful fabric faded a bit.

I first wish to make reference to my work process. This is essential commentary. Between the end of the ’90s and the beginning of the next decade, I started to work on the “digital mundane,” which I denominated at that moment “Popular Saints.” This was a type of fantasy that remains present in my current work. The process itself was quite simple.

An artist who grew up not far from Disneyland moves from Southern California to New York where he finds a cheap apartment in Greenpoint and a job at a framing shop. It’s the mid-1980s and the city seems like a rough place filled with a lot of obnoxious people. He wonders whether the problem is that New Yorkers never get to see the night sky.