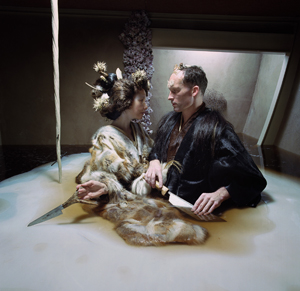 Bjork and Matthew Barney gambol in a pool of hot grease.

Scratch the glittering hide of the most successful artist and you’ll probably find a bruised little outcast lurking inside, still smarting from some long-ago snub. Even so great an eminence as Frank Gehry is not immune, on the evidence of Sketches of Frank Gehry, a profile of the renowned architect by his equally famous friend, the director Sydney Pollak.

The documentary depicts Gehry as a grandfatherly mensch, self-deprecating about his early setbacks and becomingly grateful for the acclaim and high-profile commissions he enjoys today. His greatness is attested to and reflectively enhanced by such high-wattage Hollywood luminaries as Michael Eisner, Bob Geldof, and Barry Diller. Yet as Gehry’s story emerges, amid gorgeous shots of his amazing buildings, we see flickers of the anger and disappointment he felt in the days when he searched for his own path and endured the derision of those who dismissed his work as impractical and ugly.

One of his teachers assured him he’d never make it as an architect, Gehry recalls, and Pollak points out that soon afterwards the young man changed his last name from Goldberg to Gehry—at the insistence of his first wife, the architect says, but the implication is that an overtly Jewish last name was less than welcome in the clubby world of architecture.

Gehry describes designing an undistinguished shopping mall in order to pay the bills and reflects how frightening it was to turn his back on lucrative but soulless work to pursue his own vision. Gehry’s temper and aggressiveness, though never displayed, are alluded to. His long-time therapist, Milton Wexler, is brought on camera to describe how Gehry struggled to overcome the internal and external blocks to his own creativity.

Sketches is primarily a celebration of Gehry’s achievements and—at its most intriguing—an exploration of how he works. The practical details of the buildings come later; at the outset, his intuitive, physical approach to design looks very much like intensely focused but open-ended play. Futzing around with pencil and paper, scissors and tape, he makes fanciful sketches and creates crude little models with his assistants in order to discover the form of the project he’s working on. “That is so stupid-looking it’s great,” he exclaims with satisfaction when, after many attempts, he finds an arrangement of shapes and textures he likes.

Yet to tell this story the misunderstood genius must be evoked, and not just because in Gehry’s case it was no doubt true. Without that chapter, Gehry, with his museums and concert halls and big-name patrons, would look too commercial to be taken seriously. Absent his fame, he’d be beneath our notice, yet if he’d never been scorned, we would not so readily recognize him as a real artist.

Perhaps that’s one reason some of us have trouble taking Matthew Barney to our bosom. Barney put himself through Yale by working as a fashion model and he’s been an art-world hit since his first group show; if there’s a tragic second act, it hasn’t happened yet. And there’s something off-puttingly bulletproof about not only his biography but also his movies, sculptures, and installations. Not to mention his art-jock physical presentation.

DR 9 takes place on and around a huge Japanese whaling vessel, with Barney and his significant other, Bjork, appearing as the “Occidental Guests” who are invited on board to be bathed, shaved, and dressed in furs for a Shinto-esque wedding ceremony. Also brought aboard is a tankful of Barney’s signature petroleum jelly, which is pumped hot into a large mold, chilled, unmolded, and melted down again. The liquefied jelly invades the couple’s chamber and gradually submerges them as they take out whaling knives and cut each others’ legs to shreds, eating their own flesh and transforming themselves into chimeras, half-human, half-whale.

All this is shot with the pacing we’ve come to expect from video art, that is, painfully slow, and neither Barney nor Bjork appear capable of even bad acting. But the tedium is leavened by the beauty of some of the images and by Bjork’s score, which uses Japanese folk motifs, Noh, and Bjorkish wails to create riffs that are by turns meditative and exceedingly dramatic. And really there’s no point in critiquing this as a movie, because it isn’t one: it’s a big, glossy, high-priced object, a sculpture being made inside our heads.

Indeed, there’s something imperialistic about the domineering way Barney demands our attention. At a time when goofing around seems to dominate art practice, Barney’s overweening self-seriousness is perhaps a reason he’s widely admired. But the intricacies he keeps generating shove aside whatever our own associations might be. As his personal iconography goes through one elaboration after another, his engagement with his own engagement feels ever more oppressive. Watching DR9 is like being forced to listen to a brilliant but deranged dinner companion give a complete run-down on an intricate historical conspiracy—but minus the plotline.

Anyone who thought Art School Confidential was superficially broad in its depiction of art-world arrogance ought to be forced to sit through Barney’s two-plus-hour-long valentine to his own thought processes. A world-famous artist who spends vast amounts of money and effort filming squads of Japanese dancers worshipfully welcoming the arrival of a tanker truck full of his hot VaselineÖwho could make this stuff up?

The posers and flaming assholes of Terry Zwigoff’s underrated little movie likewise come to mind when the painter Julian Schnabel makes an unintentionally hilarious appearance in Sketches of Frank Gehry. Dressed in nothing but a terrycloth robe and dark glasses, clutching a snifter of brandy and a cigarette, Schnabel plays the Great Artist as a cross between Picasso and Hugh Hefner.

While we’re on the subject of Art School Confidential, am I the only one who really, really liked it? The critical consensus was pretty unanimous: the jibes at art inanity were enjoyed by one and all, but the film’s serial-killer subplot and downbeat ending were roundly condemned as de trop.

But take away the murders and you’d be left with a snotty little tale in which nothing much is really at stake. A young man goes to art school hoping to realize his naive dream of becoming the Picasso of the 21st century. Instead his careful draftsmanship is disdained by his hipper classmates; they, his teacher, and the beautiful model he adores all prefer the aggressively childish cars and trucks painted by a hunky blond who turns out to be concealing a secret identity. Will the young man’s true worth ever be recognized?

It’s a great plot line for “Rocky Goes to RISD,” but it won’t wash with most veterans of art school. The humiliation, the despair, the war of all against all, the seething hatred of those above and below on the status ladder—it’s an atmosphere in which random murder might credibly seem healthily expressive.

Every creative field has this cats-fighting-in-a-bag quality—there isn’t enough work and money and fame to satisfy more than a tiny fraction of all the aspiring actors, writers, dancers, and directors out there. But visual art seems to be a peculiarly harsh environment, because schooling is so costly, the work so lonely (perhaps that’s why art collectives are increasingly popular), and the chances of making it as a fine artist so slim.

No wonder the characters in Art School Confidential are furious not only at their colleagues but at the wide indifferent world. The desire for vengeance against all of humanity is expressed repeatedly, and not just by the actual killer.

We tend to define a true artist as one who is in some crucial way deeply alienated from the sordid everyday. Successful artists like this notion because it makes them heroes; it helps the rest of us find solace in our decision to take the road more traveled, the one covered with strip malls and non-architected houses.

The darkness of Art School Confidential, and its power as more than a send-up, stem from the movie’s embrace of the artist outsider ideal, its valorizing of alienation as the only way to achieve valid creative inspiration. Its protagonist is successful—as a man, as an artist—only to the degree he renounces, or is forced to renounce, the yearning for acceptance.

Frank Gehry knows that’s a false choice, but the angry young man inside him doubtless believes in its truth. As for Matthew Barney, he’s probably too busy (in his words) “joining the mouth of Situation with the anus of Production” to care.