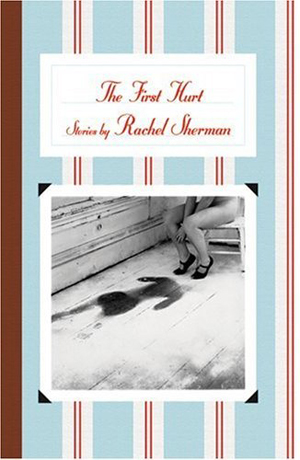 Kiss me and you will see how important I am. This Sylvia Plath line could easily be uttered by any of Rachel Sherman’s characters in her debut collection of short stories The First Hurt. Plath knew what she was talking about when it came to inner anguish and harnessed love, and so does Sherman. She seamlessly portrays the world of adolescent girls who, on the brink of sexual experience, find themselves surrounded by adults who cavort like teenagers. Sherman’s writing is so refined; it is a pleasure to find that her characters are not. In effect, they are all horny and insecure and want to flaunt their sexual proclivity with shoulders thrown back. The lesson here is that no one knows anything, let alone the grown-ups.

As a collection, The First Hurt is as much about the embarrassment of being without sex, as the embarrassment of being with it and feeling nonplussed. Sherman is deft in her depiction of the disappointment and commonness of first physical pleasures. In “Keeping Time” a camp counselor envies the adoration, Trisha, the palest and shyest of her wards holds for her boyfriend. She struggles between wanting to inappropriately flaunt her sex life, and admitting to herself that the murmurings of her coveted summer fling sound naïve, even boring. Sherman keeps her writing clean and honest, even though the emotions she portrays are inevitably muddled, and intangible. The contrast is more than natural; it’s completely evocative of the liminal space between sexual adulthood and blissful naivety. When the summer ends with a stolen kiss, the longing to remain a girl is overwhelming.

The title piece presents a girl burdened by a bustling grandmother and bad skin, yet escapes sounding trite. Sarah smokes joints in the bushes while spying and lusting after lacrosse players. The writing is tactile, bursting with lips, and oranges, and sweat and weed. Here, secrets are more than kept; they’re hoarded. And Sarah’s compulsions run deep, manifesting themselves in her inability to stop scarring her body. When her love-interest and sometime companion, Ham, tries to broach the subject, she answers with a succinct, “Fuck you.” The response is so naturally defensive, that it fits this sulky and moony teenager perfectly, and Sherman should be applauded for using such an over-used phrase so flawlessly. Sarah rarely confides in anyone, minus a few stilted conversations with her grandmother, who seems like a confused teenager herself. Ham, whom Sherman has painted as the prototypical jock comes complete with anorexic girlfriend and “Straight-edge shoulders”. Sherman has made him naively empathetic, and completely oblivious to Sarah’s burgeoning admiration. A sprained ankle in the woods leaves them stranded together, and then divides them. Every moment in ‘The First Hurt’ is tender and subliminally sexual. It’s a stunning story and easily anchors the entire collection.

In fact, many of the teenage girls Sherman creates carry a physical irregularity. In “The Reaper,” Beth wields the wine colored birthmarks on her face like a shield, keeping herself isolated from her classmates, and finding the echo of their shapes in her bedroom carpet. It’s a beautiful and atypical parallel that Sherman pulls off effortlessly. As Beth dreams of a spotless reflection, and acceptance, she reveals herself solely to her pen pal, a soldier stationed in a land faraway, a fantasy man in a fantasy place. The tone is dreamy at first, but Sherman quickly crushes it by interjecting the story with the soldier’s short letters, which are both commonly endearing and sexually perverse. In fact, he insists that a foreign entity has taken over his mind, forcing him to ask pedophilic questions. Sherman captures this dubious split personality in capitals letters that shout from the page. He objectifies Beth, requesting panties and photos, and his letters arrive incessantly. When her parents inevitably intervene, Beth must face the reality that the love she seeks is a distant cousin of the obsession she has accepted.

The First Hurt is a satisfying read, despite the fact that so many of Sherman’s characters are fundamentally unsatisfied. She has mastered short declarative sentences, (Boys were already saying things.), which manage information and nuance. To her credit, Sherman accomplishes much with few words, shaping back-story with precise moves to form a history that feels complete. It speaks of Sherman’s ability to peer into others that the inner compulsions, perverse jealousies and secret fantasies of her characters, are just forbidden enough to feel distinctly human. Anyone who can remember the stirrings caused by shoulders rubbing in homeroom, or the agonies of squandered teenage love will find a companion in The First Hurt.

Caroline Seklir is a writer based in New York City.

Edwidge Danticat’s Everything Inside: Stories

Danticat’s writing is language stripped bare which lets her stories and characters breathe. There is a rising intensity in these stories from the first sentence of the first page that draws the reader in and demands we pay attention.