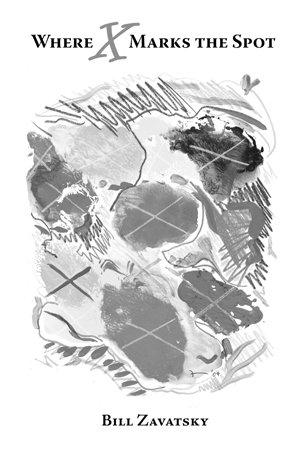 More than thirty years have passed between Bill Zavatsky’s first full-length book, Theories of Rain and Other Poems (1975) and his second full-length book, X Marks the Spot. And yet, while Zavatsky wasn’t gaining a reputation as a poet in the interim, something his new book ought to change and swiftly, he certainly has been in the thick of things. In the 1970s, Zavatsky, who was in his early thirties, was the director of the important small press SUN and SUN magazine. Under his direction, SUN published translations of Sens Plastique by the Mauritanian writer and aphorist Malcolm de Chazal, The Dice Cup: Selected Prose Poems by Max Jacob, The Sun Placed in the Abyss and Other Texts by Francis Ponge, and How I Wrote Certain of My Books by Raymond Roussel. The translators included John Ashbery, David Ball, Michael Brownstein, Serge Gavronsky, Ron Padgett, Zack Rogow, Trevor Winkfield, and Zavatsky himself. In addition to the translations, SUN published books by George Economou, Jaimy Gordon, Michael Heller, Bill Knott, Philip Lopate Ron Padgett, Peter Scheldahl, James Schuyler, Harvey Shapiro, Tony Towle, Paul Violi, and Marjorie Welish. This generosity alone constitutes a major contribution to American literature. For one thing, the translations introduced a younger generation of writers (myself included) to the work of little known foreign authors (de Chazal and Jacob), as well as little known texts by Ponge and Roussel. And, if this was not enough, Zavatsky was the first to publish books by Lopate and Welish, as well as reprint Schuyler’s Freely Espousing. In addition to publishing books by others, he and Padgett co-translated The Poems of A. O. Barnabooth by Valery Larbaud, and with Zack Rogow he co-translated Earthlight: Poems by Andre Breton. Published in SUN, his translations of Robert Desnos remain among the best.

Given Zavatsky’s first book of poems, and the considerable time he has devoted to publishing poets who are associated with the New York School, as well as his own beautiful translations of Breton and Jacob, among others, the reader might reasonably expect the poems in X Marks the Spot to show traces of his love for Surrealism, the hermetic and aphoristic. The fact is that Zavatsky has done the one thing that we least expect of others, but often secretly desire for ourselves; he has reinvented himself and, in the process of doing so, he has reinvigorated (this isn’t really a strong or enthusiastic enough word to convey my admiration) a form of poetry that can be characterized as transparent, autobiographical, and confessional. He has not only transformed the predictability of the confessional poem into a capacious form capable of being simultaneously funny and horrifying, but he has also revealed that mode’s most obvious avoidance, which is both exposing and owning one’s familiar acts of self-pity (aka self-loathing). This is the demon Sylvia Plath, Robert Lowell, Anne Sexton and their heirs, some of whom teach in New York but don’t seem to actually live here, rigorously avoid, perhaps because it cuts much too close to the bone. Better to put the blame on father, daddy, or Satan than to look at yourself with a magnifying glass.

Zavatsky does something close to the opposite of what the confessional poets do with self-pity. He replaces its claustrophobic subjectivity with a cool objectivity that is as heartbreaking and lyrical as the music of jazz pianist Bill Evans (there is a wonderful poem for him in the book).

I felt life fall away from me. Again I felt
that I would never be happy. I felt the words

that I wanted to say to you leaving me, rushing

out of my chest like dead air, until I had no more words

to say. I seemed to cut and swallow my food

as if it were me myself that stuck in pieces

on the end of the fork I had raised to my mouth.

Had I been chewing on my own flesh?

Self-Pity the Devourer took me by the hand

that held the fork, and once again I feasted

on all that was dark and hopeless in myself,

in lieu of all that was beautiful, desirable,

and unattainable in you.

A longtime jazz pianist, Zavatsky never devolves into that declarative insistence that often gets confused with sincerity. His language shifts seamlessly from the transparent (“I seemed to cut and swallow my food…”) to the darkly comic (“Had I been chewing on my own flesh?”), to an allegorical personification at once medieval and contemporary (“Self-Pity the Devourer took me by the hand/that held the fork”), while also establishing a resonant juxtaposition. A suddenly dislocated being, the narrator is both inside and outside himself.

Zavatsky’s ability to shift perspective is one of the things that distinguish his work from the confessional poets, the majority of whom are stuck in their “I.” For the most part, they inhabit a landscape that is decidedly 19th century, which is to say a place unaffected by the innovative perceptions that characterize Cubism, Futurism, and Surrealism. Zavatsky has transformed his knowledge of the Surrealism’s juxtapositions and Cubism’s dislocations into a mode of perception that is both open to the world and vulnerable to the mind’s wandering. His poems are not made up of surface gestures. They are layered and sinuous, the direction of the narrative thrust turning, twisting, and jumping in ways that catches us up.

But I remember Danny:
ugly string tie below thick eyeglasses,

The lights were down, he could see everything.

Tonight, as leader, he called the shots. No more

Danny had recently filed for bankruptcy.

I had spotted it in the paper.

Of course, I never mentioned it; besides,

Danny seemed untouched by this swipe of Fate,

a man who picked himself up, said “Fuck you!”

to the heavens with his hands, and went his way.

What a precise and exquisite portrait of a sleazy small-time musician Zavatsky has placed before us, and it is only a small part of “The Woman Who Danced and Took Off Her Clothes, The Woman Who Sang and Cried”, one of the many poignant poems in this extraordinary book.

“104 Bus Uptown”–the title of the first poem in the book–begins: “How bad can it be/dear wacky New York City,/ when the first twelve lines/of The Love Song of J. Alfred Prufrock/blink down at me/from a poster on this bus….” As Zavatsky knows, each day of our lives can be a roller coaster ride, rising to that sense of urban camaraderie when you see that you are sitting on the same bus as “the beautiful actress Beverly D’Angelo”, and just as quickly and unexpectedly descending, as he does in “X Marks the Spot”, to depths of isolation and loneliness that each of us knows all too well:

…I caught a glimpse of your
face as we put our arms around each other,

and your face said everything to me about

how you wasted the afternoon, how eager

you were to speed away in your car, a mixture

of disgust and relief that the thing would soon

be over, that I would be crossed out forever

from your life–and everything that I hated

about myself, my stupid chin, my ugly nose,

my wreck of a heart, crashed over me,

spinning me into the vortex of self-hate

that I have only ever let myself feel

a little bit at a time, though it is always there.

Since his 1955 debut at the Six Gallery reading where Allen Ginsberg first read "Howl," Michael McClure (1932-2020) has been one of the most significant and well-known poets in the U.S. Mule Kick Blues and Last Poems, the final book he completed in his lifetime, appears this month from City Lights Books.

K. Desireé Milwood is a Panamanian-American poet & author of Poems for My Namesake released in 2016. She is known for her witty & thought provoking style of haiku. She currently resides & creates in Newark, New Jersey.

Distinguished by its gritty realism, Rainbow Milk is among the more convincing debuts I have read in years.

An orange creamsicle-colored carpet lures visitors to Vito Schnabel Gallery into another realm—that of Unweave a Rainbow, LA-based artist Ariana Papademetropoulos’s current exhibition on view at the gallery’s New York space. The plush room is sensual and juvenescent, complete with six paintings and two modular sculptures of rainbow-hued velvet cushions placed on the floor to be utilized and rearranged.