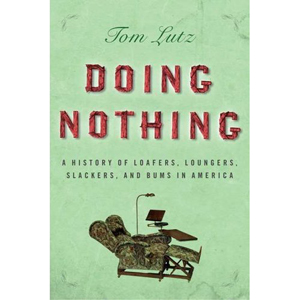 One of my more significant childhood experiences took place at a leisurely Sunday barbecue, when an employee of my father’s asked his infant: “What does daddy do at Mr. Heinlein’s company?” The baby stretched an arm out of her cradle to rub her index and middle finger with her tiny thumb. I couldn’t believe my eyes: the baby, not yet able to walk, displayed the international gesture for money. Ever since then I have been a little suspicious when anyone emphasizes the importance of work as an instrument of power and making money. Instead, I empathize with loafers and flaneurs, with whom I share my affinity for play, escapades and my suspicion of “the man.”

Tom Lutz’s Doing Nothing chronicles “A History of Loafers, Loungers, Slackers, and Bums in America.” He not only provides context and support for people like me; he has created an encyclopedic piece of work that tells the stories of characters in literature, film, on TV, and in reality, who refused to work.

Tom Lutz begins on a personal and psychological note, sharing his frustration and anxiety about his teenage son Cody’s couch-and channel-surfing. Generational tension recurs through history: Paul Lafargue published his famous article “The Right to Be Lazy” in 1883, the same year that his father-in-law, Karl Marx, died. Lafargue, in a statement that surely made the earnest defender of the working masses spin in his grave, stated that in the age of industrialization “all individual and social misery is born of the passion of work.” He proposed a change in legislation by which workers shouldn’t have to work more than three hours a day. Machines, he argued, would soon replace the workers.

For Lutz the slacker expresses the fears and hopes of his time. He is, Lutz writes, “a critique of our culture’s twisty relation to work and to leisure.” Using the slacker as a lens through which to examine socioeconomic and psychological contexts, Lutz sheds light on the work ethics and work environment of the past four centuries.

Herman Melville’s story “Bartleby, the Scrivener” (1853) serves Lutz as an example for the silent struggle of employees “in the brave new world of Wall Street’s capitalist offices.” Bartleby’s famous sentence “I would prefer not to” not only illustrates a lunatic’s refusal to work; Lutz thinks that Bartleby’s preference represents the detachment of the modern low-end office worker from his seemingly senseless work.

Avoiding work, however, is not only reaction to alienation and oppression – it can also be a matter of health. In the 1860s the inability to work was first branded as a medical condition. Doctors prescribed extended rest for those suffering from Neurasthenia, an illness supposedly caused by overwork and expressed through utter exhaustion and nervousness. It is unclear how the rest cure worked – many patients began to suffer from bed boredom and were eager to get back up and work.

Could it be that growing up among work-obsessed fathers (or mothers) drives us to slack and dawdle? Maybe. Even our President’s slacker career began as adolescent revolt. Once again, the conflict between hard work and slacking is personified by the relationship between an ambitious father and a lazy son: Admitted to Harvard Business school, Bush Jr. told his old man, “I’m not going.”

A few years later Bush became a slacker in the truest sense of the word: He avoided the Vietnam draft. The term slacker, in fact, was originally used to label those who dodged World War I. (Various propagandistic movies from the time carry the term “Slacker” in their titles.)

“After a series of non-famous arm-twistings,” Bush was admitted to the Texas Air National Guard. According to the media Bush didn’t exactly bust his tail there either. Next came what Bush calls his “nomadic years.” The President lived rent-free in many different states and apartments and had few jobs during long periods of unemployment. Unlike Lutz’s son Cody, who in the book’s last chapter finally leaves the couch, George W. didn’t grow out of this slacker phase. In 2001, The Washington Post calculated that, since his inauguration, Bush had been “not working” 42 percent of the time. “George W. Bush,” Lutz concludes, “will likely go down in history as our slacker president.”

Our President’s affinity for loafing seems to be part of a larger trend. Chris Morran wrote his Hardly working, The Overachieving Underperformer’s Guide to Doing as Little as Possible in the Office (2004) on company time. He gives tongue-in-cheek advice on how to look busy while doing nothing. Marc Saltzman gives further tips in White Collar Slacker’s Handbook; Tech Tricks to Fool your Boss (2005).

Most recently, British author Steve McKevitt introduces a new category of the lazy in City Slackers; How to Play the New Corporate Game and Win (2006). He claims your success doesn’t depend on your performance, but on your “performance“ – you just need to give the impression that you are doing a great job. Self-declared loafer Tom Hodgkinson wrote How to Be Idle (2005) and publishes a famous British bi-annual, The Idler.

Lutz notes that, although the new workplace encourages employees to interact in office lounges and game rooms, workers are being deprived of many freedoms: “The surveillance of workers has undeniably and dramatically increased,” he writes. New York Mayor Mike Bloomberg recently – and famously – fired an administrative worker for playing solitaire in his cubicle. So consider yourself warned – even if the chance of the mayor dropping by you office is slim, it’s quite likely that your boss monitors the time between your keystrokes.

Lutz’s research certainly does not reflect the laziness of his subject matter. It is academic and well grounded, based on a tremendous amount of literature (his bibliography lists more than 600 titles) and on ordinary reporter footwork. (He travels as far as to Japan to meet the freetah, the Japanese slacker.)

Lutz writes with passion, humor and lightness; you will have quickly whiled away the book’s 350 pages. “Doing Nothing” demonstrates that non-workers are as heterogeneous as (and certainly more eccentric than) their working counterparts—an insight that makes for surprisingly riveting reading.

You might wonder how so many colorful details are known about the history of loafing. This answer is simple: Many famous “slackers” shared a passion for writing. Among the slackers/writers were Samuel Johnson (who claimed in the 1700s that every man is or wants to be an idler), Oscar Wilde (who declared that doing nothing is the height of human achievement) and Jack Kerouac (a slacker too lazy to edit his prose).

Doing Nothing presents a lot of interesting but sometimes unrelated stories and could have benefited from a more cohesive argument about what causes and constitutes slacking.

For example, Lutz falls a bit short in identifying the slim line that divides working and slacking. Is it slacking if you love what you do but don’t earn money doing it? What if you fulfill your dreams, and work doesn’t feel like “work” anymore?

Being the daughter of “the boss” – a workaholic whose only hobby it is to accrue money – I decided early on that I too would rather live poor but do what I like: reading, writing and reviewing books. Like di Prima, I know that the right mixture of work and slack often makes writing pleasant, original and efficient. And that is why, dear reader, I now have to take a long nap, then read another book and much later, maybe, pick up my pen.

95. 24 University Place, A Restaurant in Chinatown

A young artist frequents the Cedar Bar where he drinks with older painters he admires. It’s there that he meets and befriends an artist who gives him a piece of advice he never forgets.