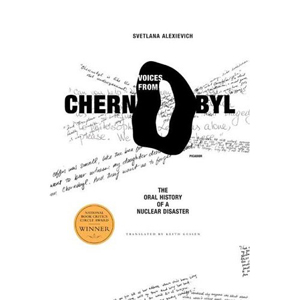 Sometimes, a single event can define an entire era, drawing on disparate strands of history to tie them together in a single unforgettable knot. For anyone who spent the 1980s in the Soviet Union, that event was surely the nuclear meltdown at Chernobyl on April 26, 1986, which seared the national memory with the cruelty of molten lava pouring over the earth.

I remember, for example, my father forbidding me from drinking the rain. A spring shower had burst from the surly Leningrad sky, and I saw nothing wrong with letting a few drops cool down my tongue while we waited for milk or sugar or whatever was in shortage that week. But he knew better, and although reports from Chernobyl were deliberately vague, my father had heard—on a cheap radio that managed to pick up an illegal BBC signal—that scientists in Sweden and other Northern European countries had detected radiation in their rainfall, suggesting that what had taken place at the nuclear power plant in the Belarussian countryside was far more than a mere malfunction.

Chernobyl “produced…more survivors than victims,” Keith Gessen notes in his introduction to Svetlana Alexievich’s Voice from Chernobyl, a collection of oral histories that is as much a statement on human frailty and endurance as the finest works of fiction in the canon. It is almost certainly the most harrowing account of a catastrophe that—along with the disastrous campaign in Afghanistan—revealed the Soviet system as corrupt and inefficient, unable to achieve its lofty goals or just simply protect its citizens in the face of harm that was tragically avoidable. Or, to quote from Gessen’s insightful introduction, Chernobyl was “the product of a culture of cronyism, laziness, and a deep-seated indifference towards the general population.”

If there is a Russian soul, it is certainly to be found in this book. And if there is not, Alexievich—through the accounts of soldiers, survivors, journalists, and the unlucky “liquidators” first charged with cleaning up the mess without being told of the nuclear hazard they would encounter—has produced one the strongest, strangest accounts of the Russian experience on record. Absent is the burdensome psychology of Dostoyevsky, the high spirituality of Tolstoy, the wistful humor of Chekhov; here is Russia painted in stark colors by citizens who knew her famous capacity to bear suffering most intimately. “We’ll never be Dutch or German,” one soldier announces, “And we’ll never have proper asphalt and manicured lawns. But there’ll always be plenty of heroes.”

Of course, the heroes of Chernobyl would pay a terrible price for their valor. As was the case in September 11th, those who first responded to the catastrophe would—in some terrible, inverted moral calculus that is practiced all too often—end up paying the highest price, unaware that they were venturing into territory where radioactivity was well above the lethal level. And yet, confronted with death, the victims of Chernobyl show a defiance that is almost more challenging than death itself. For example, there is this from the account of the wife of a firefighter who would eventually succumb to his injuries: “His central nervous system is completely compromised, his skull is completely compromised. Okay, I’m thinking, so he’ll be a little fidgety.”

From the harried evacuations to the ineffectual plans to stop the core fires and the return of those who had no where else to go, Alexievich chronicles the gamut of human emotions—feverish hope, unmitigated dread, the countless shades of gray in between—with the precision of a stenographer. Her equanimity is, I am fairly sure, exactly what this project required, since anything more would have injected an author’s vanity into the naked words of victims and survivors. “No one’s going to fool us anymore,” says a woman who chose to return to Chernobyl despite the obvious dangers, “we’re not moving anywhere. There’s no store, no hospital. No electricity. We sit next to a kerosene lamp and under the moonlight. And we like it! Because we are home.” The words are so forthright that any gloss on them, no matter how slight, would be an intrusion.

Despite the distance of two decades, it is impossible not to see comparisons to Hurricane Katrina. Both disasters afflicted the most chronically mistreated and under-appreciated citizens of their respective countries, one hobbled by the specters of slavery, segregation and racism, the other by the terrors and starvation inflicted by Stalin and Hitler, among other injustices. In neither case, shockingly, was the history of suffering enough to muster the necessary resources for a proper response.

The reality of Katrina manifested through photographs and video feeds—survivors clinging to debris and begging for help from rooftops, neglected and bloated corpses floating in filthy water. Chernobyl, by the necessity of its radioactivity, was prone to fewer images, which is one of the reasons that Voices from Chernobyl is such an important act of witness. The words here are as immediate and wounding as any can ever hope to be. “And now I live with this,” one soldier who had been ordered to fly dangerously low over the contaminated zone concludes. In a way, regardless of whether we grieve for New Orleans or Chernobyl, we all do.