Victoria Newhouse, Art and the Power of Placement (The Monacelli Press, 2005) 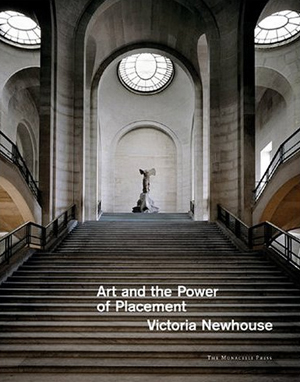 In Art as Experience, John Dewey describes form in art as, “the operation of forces that carry the experience of an event, object, scene and situation to its own integral fulfillment.” Dewey’s contemporaries and immediate successors took the above to describe the harmonious overall structure of a work of art deriving from the relationship of shapes central to its composition. This, they believed, was where aesthetic experience originated. To arrive at such an experience, this equation suggests, one requires the right art object, the well-conditioned viewer and little else besides. The very idea of a masterpiece such as Michelangelo’s David (1501-1504) or Diego Velazquez’s Las Meninas (1656) carries with it a gravitas that sets the work above extraneous concern for, say, the size of the pedestal on which the David stands or the length of the wall on which Las Meninas hangs.

More recently, artists and theoreticians have taken a somewhat broader view of what it means to experience a work of art. Installation art has challenged our understanding of the art object as independent of its environs, while much recent aesthetic theory is given over to the notion that a work of art cannot be understood without consideration of the context in which it is created. Among postmodern thinkers, some have gone so far as to challenge the very concept of an autonomous experience in art. Art, they suggest, is a set of cultural parameters within which the artist operates. The created object becomes a sort of signpost pointing to things other than itself. Postmodern thought has the fortuitous effect of forcing us to consider that which surrounds beloved objects as central to their being.

In her new book, Art and the Power of Placement, Victoria Newhouse grapples with these issues in an in-depth study of how art is seen through careful consideration of how, in the broadest possible sense, it is placed. The author’s care in handling her material is commendable for anyone involved in the arts. Her particular attention to the relationship of the artist’s intent to the work created is of central and novel import to this type of study. Although absolute answers to questions of presentation are a matter of personal taste and passing fashion, sensitivity to the forces at play in exhibiting art is the most one can ask of professionals in the field.

Part of what makes Newhouse’s study so compelling is its emphasis on settings other than the museums and galleries to which we’ve become accustomed. Due to their incessant promotion, we have come to accept four white walls as the ideal backdrop against which to view and understand art – not just contemporary art, but any art, Titians and Warhols alike. Dia Beacon is a kind of apotheosis of this sort of viewing foreshadowed by the spacious halls of galleries such as Gagosian. Bit by bit, all art is being pulled into this vortex, often to the disadvantage of those who view it. The only work that has held its own in the atrium of the new MoMA is Barnett Newman’s Broken Obelisk (1963-67) and even that would look better outdoors. The space dwarfs anything placed inside it and should really be empty, a shrine to modern architecture and its hostility to painting or anything else extraneous to itself.

In Philadelphia, in spite of founder Dr. Albert Barnes’s will, they’re preparing to move the Barnes Collection from its previous home—where it has remained since the day it was built to house his collection—to a white walled museum. When they do, the collector’s eccentric vision, which has as much to do with building a great collection as the art itself, will be lost. Why not do the same with the old masters’ paintings in the Isabella Stewart Gardner in Boston and the Frick here in New York? Or perhaps such excesses are only excusable when it comes to modern art.

Newhouse’s first stop on her campaign to dismantle our aesthetic presuppositions is in the studiolo of Renaissance Italy. The studiolo was a relatively small, high-ceilinged room, usually windowless, in which collectors housed their acquisitions. Paintings were hung end-to-end and floor-to-ceiling, often against brightly colored backdrops with heavy molding. Small drawers beneath the paintings housed small or fragile works. Despite the fanfare, these were private settings decorated to the exclusive taste of a singular patron. From the studiolo, Newhouse moves to the French salon where we discover a harbinger of things to come. The salons featured a floor-to-ceiling hang—as Newhouse terms it—but in much bigger rooms with much higher ceilings then those of the studiolo. Displayed without regard for quality or relationship to neighboring work, much of the art there could not be easily examined. Sound familiar? The fiscal logic that underlay the salon installations is that of the contemporary art fair.

Newhouse implicitly recommends the ideas that govern artists’ decisions of how to display their own work. This is an invaluable contribution from an author who will doubtless be read by museum and gallery professionals for years to come. Her examination of Pollock’s 1950’s installation of his own work at Betty Parsons Gallery reveals the artist imitating his studio practice in the gallery. He hung his mural paintings as he’d painted them, unstretched, and abutted small and large work as he had in the studio. Using photo documentation, Newhouse compares the Betty Parsons shows to subsequent exhibitions of Pollock’s work to reveal how departure from his ideas undermined congenial presentation of his paintings. Beyond the enormous advantage of having the artist around to help out, the Betty Parsons gallery was of roughly the same size as Pollock’s small studio barn in Springs, Long Island where he made the work on display. It sported similar wooden floors and a rough hewn look. The intimacy of these environments heightened the power of Pollock’s painting, as did, most impressively, the installation of Blue Poles: Number 11 (1952) and One: Number 31 (1950) at the home of collector Ben Heller. By focusing attention on Ben Heller’s home in addition to Pollock’s Springs studio, Newhouse extends her argument to suggest that art is better understood through the eyes of those who care most deeply for it.

Though Newhouse is sensitive to the pressures under which museums operate, some, particularly the Musée d’Orsay in Paris, come in for a bit of rough handling. Newhouse is most critical of the Orsay’s installation of Manet: supporting wires clearly visible against stone walls, his finest works cede pride of place to lesser artists’ offerings. In addition to careless installation, Museumification—the transformation of a work of art into an historical illustration of itself through moribund installation—is a particular danger in the institutional setting. As the public’s primary resource for viewing and understanding art, museums have the greatest responsibility for presenting it well. Any public institution with a pedagogical function must take historical context into account without losing site of the particular nature of individual works. This is particularly complicated with art such as that of ancient Egypt, which, Newhouse points out, was meant to be entombed with the dead. Here, again, the author examines the differences in multiple museums’ installation of the same major exhibition to reveal the difficulties of handling the delicate historical line that links an ancient culture to the present. The museums tried everything only to discover further problems. Choice of sepulchral lighting, for instance, sacrificed clear viewing of the objects. In brightly lit conditions the same work seemed to loose some of its dark power. Isolating an important piece restored prestige but severed links with other pieces on display.

One solution to representing historical context in a contemporary setting is the Getty Villa in Malibu, California —J. Paul Getty’s recreation of a classical garden. The Getty Villa has a remarkable heritage. It contains, as described by Newhouse, “…twentieth-century copies of works that are themselves Roman copies of earlier Greek models … seen in a twenty-first century setting copied from a Roman prototype, parts of which—such a the peristyle garden—imitate Greek precedents.” The original sculptures are on display at the National Archaeological Museum in Naples where the ample space given each sculpture and the neutral background destroy any sense of the sculptures’ original placement in the villa.

“In substituting replica for reality,” Newhouse writes of the villa, “context replaces content.” J. Paul Getty’s authentically displayed copies are an indictment of the ironically titled Archaeological Museum’s inauthentic display of the original sculptures. Getty’s garden suggests that modern museums might do more to obscure their holdings then to elucidate them. We are here left in uncertain territory. We go to museums seeking the authentic article but what, in fact, are we seeing? Even the sculptures Getty copied were copies. Can art represent its creator’s intentions without the setting for which it were designed? Even when faced with the art object in its original setting, are we capable of understanding those original intentions without being archaeologists ourselves?

A sense of the limits of one’s perspective gradually emerges for the reader of Art and the Power of Placement. The white walls, high ceilings, bright light and proportionally spaced objects that we encounter in most galleries and many museums today are the physical manifestations of contemporary assumptions about viewing art. Assumptions, by their very nature, are given over to revision. It is Newhouse’s purpose, it would seem, to alert us to this transitory element in our judgments to better equip us to assess our aesthetic decisions. Lack of such awareness can produce comical ends as in Newhouse’s example of a small Watteau at the Kimbell Art Museum outsized by its own wall label. Though pedagogy may not always serve the best interests of a painting, it is an essential part of Newhouse’s book, which sensitizes us to the infinitely delicate set of conditions governing our perception of art.

While so many modern horror films rely on scares in the form of grotesque violence—the fear residing less in the audiovisual construction of the scene and more in the idea of torture, dismemberment, impending death—James puts her faith in the unexplained crinkle of a plastic dry-cleaning bag hanging in a closet.