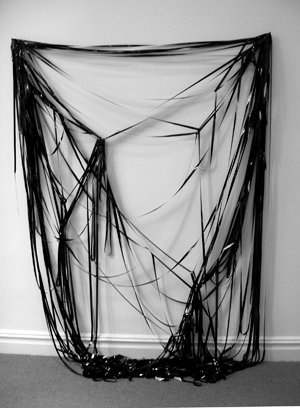 The conceptual artist William Anastasi, whose career began in the early 60s, is probably best known for playing chess with John Cage everyday in the late 70s. A number of individuals, including both the artist himself and Thomas McEvilley have argued that his contributions to conceptual art and the trajectory of minimalism have been excluded from the historical narrative of Modernism, either through negligence or conscious omission. In an excellent catalogue essay for Anastasi’s 2001 retrospective in Copenhagen, McEvilley delineates the chronology of the artist’s visionary conceptualism and whose work it clearly foreshadowed, among them canonical peers like Richard Serra, Carl Andre, Eva Hesse, and Robert Rauschenburg.

When I visited the gallery, the artist was using a small stone to grind down part of the wall for “Trespass”, which was first executed in 1966. He was concerned that the dealer, Bjorn Ressle, had tried to ‘clean up’ the wall removal. The small act of tidiness on the part of the dealer had invoked the specter of aestheticizing his work. Clearly, the way “Trespass” looks, beyond the result of grinding away a square of paint down to the dry wall, has little to do with the act. It’s in the reduction of the ornamentation, even just white paint, to further reveal the wall, and disprove the notion that art is a ‘window’ into another world, that “Trespass” turns. Bjorn’s minor transgression, trying to make “Trespass” look like more like ‘art’, seems to be antithetical to Anastasi’s work. His insistence on creating a tautology, the wall displaying itself, is a far cry from the hollow fashion of much contemporary minimalism.

The show serves as a solid introduction to Anastasi’s oeuvre with several recreations of seminal sculptures and photographs. However, the blind drawings “Roraryboryellas (blind-fold drawing)” (undated), a territory also mined by Robert Morris, do not match the wit and vision displayed in many of his early works from the Dwan Gallery exhibitions, including Six Sites (1966-67), where he reproduced the walls of the gallery at 90% scale using silkscreen photographs. Working in a reductive manner, in ways that echo and were influenced by Cage, Anastasi did more than Frank Stella to reduce art to its most ‘essential’ elements; he imbued it with a self-reflexivity that contemporary artists like Tim Hawkinson are exploring through additive efforts. I suspect that it’s this additional layer of subtle complexity and ambiguity that may have estranged Anastasi from the unambiguous work of his peers. It’s possible right now to make a meaningful comparison between Anastasi’s conceptualism and the strict formalism of Richard Serra, another artist whose work he anticipated with a show of torqued steel forms he proposed in 1968 for his 1970 exhibition at Dwan Gallery. Serra’s torqued ellipses managed to transcend minimalism’s emphasis on materiality through their monumental physicality, while Anastasi’s minimalist sculptures more cerebral, concerned with the irony of the ‘fluid’ steel forms.

There is no question that Anastasi is a pioneer of conceptualism, and that he is deserving of recognition, however belatedly. A new version of his brilliant sculpture, “Beethoven’s Fifth Symphony” (1965-2005) is re-created using a VHS recording of the symphony draped from the wall. The aesthetic complexity of the piece occurs through chance and gravity, not the artist’s hand. The show really turns on the fact that the vast majority of Anastasi’s conceptual work has very little to do with traditional notions of aesthetics. ­“Beethoven’s Fifth Symphony” bears a striking formal similarity to Eva Hesse’s “Right After” (1969), but Anastasi’s work is a visual analog for the symphony contained in the tape. His humanistic art illuminates the physical properties that make the work manifest to the viewer while engaging in witty and sometimes ironic critiques of aesthetics.

I am not particularly interested in validating Anastasi’s claim to historical recognition; it’s a shame it hasn’t happened yet. His groundbreaking shows at Dwan Gallery are revolutionary in hindsight. What I am interested in is how clearly his work illuminates how Minimalism and conceptual art have been appropriated by contemporary artists like Gedi Sibony purely as an aesthetic, not as a way of seeing the world without illusion and metaphor. While stylistic appropriation is a perfectly valid practice within post-modernism, it seems utterly vapid and pointless to display the elements of minimalism in purely aesthetic terms.

Anastasi’s reaction to Bjorn’s efforts to aestheticize “Trespass”, however unintentional, made many contemporary artists’ work seem incredibly shallow, devoid of either concept or critique. In looking at the rest of the works in the show, their chronology led me to a more radical reinterpretation. In their fascination with the body, pieces like “Sink” (1963), “Exhaling, Then Inhaling” (2000), and “Untitled (Picture of the Artist)” (1999) have more in common with the work of Hawkinson and Tom Friedman than with many contemporary artists who try to dress a space in Minimalist fashion. Created four years before Carl Andre’s “64 Steel Square” (1967), “Sink” is a slab of steel that must be continuously ‘watered’ and changes almost imperceptibly over time as rust corrodes the steel. It reminds me less of Andre’s steel square than of Hawkinson’s “Spink Sink (1 Rev./100 years)” where the form of the art mirrors the concept as a tautology.

Hawkinson isn’t constrained by Modernist ideology and works outside of the reductiveness that fueled Anastasi and his peers, but it’s this sense of playful irony that makes Anastasi more relevant than a historical footnote. “Untitled (Picture of the Artist)” speaks more to Hawkinson’s endless mapping of the body than just a photograph constructed of photographs. Anastasi transcends purely self-referential art by injecting its concepts with concerns of time, language, and identity. Hawkinson and Friedman both continue to work with similar concepts in their constructive sculpture, where addition, not reductiveness, is at the heart of their practice. Perhaps an exhibition of Anastasi, Hawkinson, and Friedman might better represent the legacy of Anastasi’s conceptualism in contemporary art history.

Camille Pissarro: The Studio of Modernism

The recently opened exhibition at the Kunstmuseum Basel, Camille Pissarro: The Studio of Modernism, is a Pissarro retrospective which, instead of uncertainty, would likely bring a lot of pride to the artist. Curated by the museum’s director, Josef Helfenstein, and Christophe Duvivier, this exhaustive show gathers nearly 200 works by the artist, including 100 paintings.