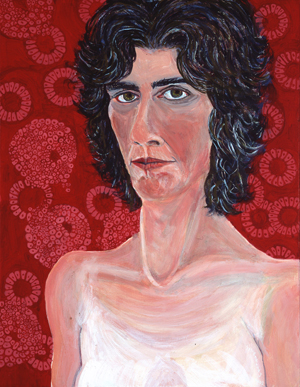 Sarah McEneaney is known for her autobiographical narratives rendered with jewel-like colors in egg tempera on wood. When an artist chooses to depict personal events as subject matter, there is a risk of being sentimental, anecdotal, or (in some cases) even boring. The history of such painting in America goes back to John Singleton Copley’s 1778 “Watson and the Shark” whose subject matter was considered shocking and innovative at the time. It is a depiction of a personal, modern event rather than one of universal importance such as a mythological or religious scene. In this painting Copley’s young servant, Watson, who has fallen overboard, is struggling and naked in a shark-infested sea, while a group of fishermen in an overloaded dory attempt to rescue him. (We learn subsequently that he was saved but the sharks were able to extract a leg-sized tax upon the young man’s body.)

In McEneaney’s paintings, despite the sustained depiction of (what seems to be) every inch of information in the image, something that could easily get misconstrued as illustration, the artist’s remarkable painterly skills prevent these works from devolving into such a simple read. While not painted in the smooth manner of late 18th century realism, but rather with a sophisticated awkwardness, more akin to folk, outsider and the idiosyncratic paintings of artists such as, the 19th Century American portraitist Sheldon Peck, the sharply observant Florine Stetteheimer and the Dutch painter Pieter Saenredam, McEneaney combines careful attention to detail with attractive eccentricities of drawing and composition to present a unique view of a world that balances a dream-like charm with a frank sense of discomfort. 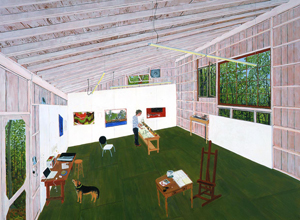 In her current solo exhibition, tellingly titled “Recent History”, this Philadelphia-based artist presents several intimately scaled depictions of life conducted in and around the studio, including a scene of her dog passing away and several self-portraits and scenarios that record various stages of diagnosis, realization and recovery from breast cancer. Several larger paintings offer panoramic views that scrupulously record colors, textures and patterns of clothing, brick, wood and wallpaper. We are shown interiors, exteriors and other details of place, such as crosswalk patterns, and buildings undergoing construction in the urban scene just outside of the studio. Painted in saturated colors and recalling the structures of Indian miniatures, McEneaney presents the clear geometries and sparseness of various spaces where she is engaged in daily activities (drawing, painting, bathing or dreaming). In looking at these images rich in information, we become aware of the duality of knowing and not knowing a place, and thus by extension, of knowing and not knowing ourselves.

A number of the paintings suggest an outward investigation of the artist’s inner life. For example, in Diagnosis/Surgery Cut (2006), a severe self-portrait set against a bright red patterned ground, we are met directly with a gaze of strain and quiet. The artist’s mastery of this unforgiving material allows for layers of color to suggest the transparency of the skin on her face, which reminds us that it is a thin, protective membrane that is both expressive and vulnerable. The bright whites of almond-shaped eyes are punctuated at the corners in flaming red, eye sockets sink behind high cheekbones into a swale of purple grey, while the rest of the face, in layers of deep reds, pinks and flesh tones, declares an intense simmering vitality. What appears at first glance to be red flowered wallpaper adorning the wall behind her quickly transforms into a representation of healthy and unhealthy cell structures that reappear in other images.

In a beautiful large painting we see the artist at work in her studio from an aerial perspective. The perspective of the space seems haphazard; long lengths of fluorescent lamps hang at odd angles as if jostling for attention and, due to the artist’s shorthanded foreshortening, the floor seems to climb uphill. We see several small paintings in various states of completion on the walls, while our view is simultaneously pulled towards the screened door and over-scaled windows offering verdant views. As in many of her paintings, adjacent rooms, windows and open doors suggest states of consciousness that reside just outside of the spaces we inhabit. In McEneaney’s paintings, these alternative places are often infused with a quiet sense of optimism and renewal. Despite the spike of emotion that hovers nearby in most brushes with death, in looking at these paintings, with their deliberately naïve verisimilitude and exacting details that verge on the abstract, we are reminded of the timelessness of sadness, the beauty of nature, and that none of us are immune from the dilemmas and complexities of life in the 21st century.

In their first solo gallery exhibition in the United States, English artists John Wood and Paul Harrison arrive just in time and too late.