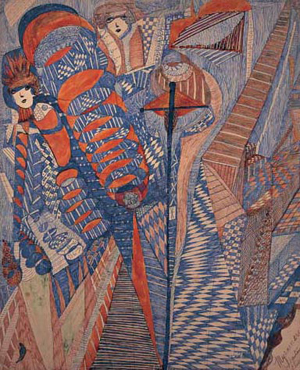 Obstinacy and intensity seem to be the month’s theme. In modern times, we seem to have had a greater separation between the amateur and professional, Sunday painter and schooled artist. The appearance of the modern artist also seems to coincide with the discovery of the outsider. Be it Picasso’s interest in Le Douanier Rousseau or Ben Nicholson’s love of Alfred Wallis, it is as if the primal understanding of composition and storytelling, and unbridled intensity of application, provides a salve to the intellectual revolutions and reductions of the modern thinker.

At the Whitechapel, Jon Thompson has organised Inner Worlds Outside. An artist and academic, he has shown regularly at Anthony Reynolds, even exhibiting a group of repetitive pattern, field paintings last year. In addition he was a big influence on the YBA crowd while Head of Fine Art at Goldsmiths. “Inner Worlds” attempts to bring outsiders together with the modern artist. It is as if Thompson were trying to reunite tendencies found in creative individuals that had been separated by mental states, that is bringing together impulses that exist between the trained and untrained, the sane and less-than-sane. It is, in his words, to analyse and view the “genuine points of overlap in the ways in which artists of all backgrounds deploy visual language.”

The bulk of the show is devoted to Art Brut and broken down into basic thematic rooms (e.g. portraiture, eroticism, language, etc.) with a suitably large corridor devoted to Madge Gill (1882-1961), a local East End resident, and a slide survey of Outsider environments. At each grouping, Thompson has cleverly juxtaposed several pieces of modernist art (e.g. Guston, Dubuffet, Bourgeois, Schiele and Bacon, among others) to make his point. Rather than a confrontational face off, this is more of a situation of augmentation and re-interpretation. Visually he makes a good case with his choices for the relation between outsider and insider. That is, Thompson fits his modernist easily into the chosen schema, and creates a healthy dialogue between outsider and insider. For example, a Jim Nutt drawing and Picabia gouache grace the “Erotic Body” section alongside famous outsiders like Aloise and Johan Hauser, while a Basquiat seems far less intense in the company of the outsider Philippe. In fact it allows interesting questions to be put to aspects of Lucas Samaras oeuvre as well as that of Hans Bellmer. This is a truly sumptuous show of haptic intensity for the visually inclined. Yet one wonders whether more exaggerated selections (e.g. Frank Stella’s ‘60s grid paper drawings in the “Imaginary Landscapes and Fantastic Cities” or Rauschenberg’s Combines in “Fantastic Dreams and Haunting Tales” or Glenn Ligon in “The Allure of Language” section) would have created more mischief in our interpretation and understanding of some artists? After all, one wonders how artists like Joseph Cornell or HC Westerman have been accepted so easily into some Modernist cannons?

Another “trained professional” walking the line between outside intensity and inside visual intelligence, is the Danish-Israeli Tal R. Born in Israel but based in Copenhagen, his current show of mainly large-scale paintings and a small installation of recent prints at Victoria Miro’s continues his fecund artistic journey. Notorious for being an accumulator of bric-brac (he’s nicknamed the “man with plastic bags”), his collage-like approach to image-making could be a direct result of this. As if channelling in Twombly’s hand via an Alfred Jensen intensity and the oomph of Jessica Stockholder, his works have the spirited touch of a brute artist.

This is a bumper month for the Dane; together with AK Dolven, Philip Akkerman and Annelise Štrba, he joins Andrew Bick’s (also the show’s curator) excellent and eccentrically hung “The Kingston Turnpike” at Kingston University’s Stanley Picker gallery, and is also the subject of a concurrent solo sculpture show at Contemporary Fine Arts in Berlin (http://cfa-berlin.com/exhibitions/fruits/). Like Twombly, there is a sense in which he uses narratives as a point of departure, but does not allow the tale to determine its outcome, rather allowing the hand and visual organisation to dictate the painting’s pace. Altogether he seems out of place in our moment of glib-handed painting and cool narratives.

Unlike the smaller objects that made up the much larger installation in last year’s “House of Prince” (exhibited at the Douglas Hyde Gallery (http://douglashydegallery.com/) in Dublin and Contemporary Fine Arts in Berlin), the Dane has returned to large-scale canvas and primarily attacking it with paint. He has turned the rhomboid framing devices he employed so well in “House of Prince” into a simpler rectangular, albeit highly decorated, format. And instead of the more abstract, schematic and bold potato print imagery that seems to come so easily to him, there is now a greater emphasis on a “bad,” searching figurative drawing. Framed with bold abstract patterns, the images seem to be of architectural scenes almost as if they were taken from picture postcards images (e.g. Venetian boats by bridges). In the most pressing piece, “La peintre n’est pas la,” there’s just graphite drawing in the centre, it looks as if the urgency of his need to complete the painting surpasses even the necessity to fill in the imagery with paint, and there lies the charge of Tal R.

At Anthony Reynolds, Amikam Toren’s latest objects again elicit a sense of the obstinate, morose and moody. An Israeli long based in London, the sexagenarian has always operated between an Arte Povera sensibility coupled with a conceptual existentialism. His methods tend towards infusing groups of objects with meaning—some more successfully than others. The most famous of which being his “Armchair Paintings,” a sampling from 1989 – 2002 adorn the gallery’s walls. These are thrift store paintings that have been awarded a new life with found statements cut out of them. Always placed centrally, well worn phrases like “know thyself,” “no ball games,” “when all is said and done” and “wash your hands before you eat” are cut into mangy old canvases. Thus turning useless things useful and valueless objects valuable.

Domestic objects (e.g. chairs, paintings, cupboards) have always been his basic raw material. Like his last show here, a major sculpture again forms the centrepiece. This time, Toren has taken a lecture chair, that is a chair with a wooden writing surface on its right arm, and glued arm after arm upon this surface, thus inflating that surface from chair to near ceiling. “Received Wisdom” may be a homage to Brancusi’s “Endless Column” in expressing the feeling that too much wisdom can weigh one down. Maybe it is even wry commentary on our desire for educated status (at this writing, University lecturers are strikingly overpaid, thus creating examination chaos). As with his more successful pieces, there is a poignant gravitas to this modified found object. One could think of these as augmented readymades, however it would be more fruitful to consider them as things fused with melancholy purpose. Though some of his objects reflect a staid, reflexive ‘60s conceptualism, of late his large-scale sculptures have taken on a certain emotive ambition. Perhaps he’s really the London art world’s Leonard Cohen. In the end, unlike the Outsider’s displays of anxious emotion, these are objects of thought generating both anxiety and feeling through far subtler avenues.