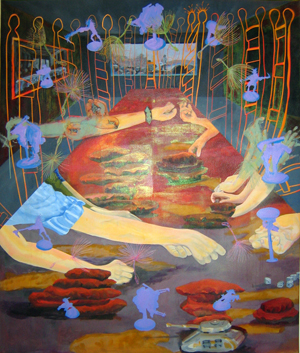 Sometimes, in this smorgasbord of karma that is contemporary life, our most meaningful relationships start with intense arguments. The téte a téte that brought Regina Bogat and Fausto Sevila into initial contact, years ago, during a painting class at Rutgers University taught by Vivian Browne (to whom this show is dedicated) was the old chestnut: whether to paint abstractly, or to just paint. Bogat, a longtime artist with connections to the Downtown scene of the 50s and 60s, was the abstract iconoclast, while Sevila, a generation or so younger, was the Post-Modernist, partial to its eclecticism. Both have stuck to their aesthetic beliefs but recognized their mutual passion for painting. A testament to their friendship, Vertical brings recent paintings by these two very different artists into close proximity.

“Ogdoatic” refers to the eight-pointed star that is the main motif of this series of paintings by Bogat. Though harnessed with an ancient history as a cryptic, mystical symbol, she ignored the form’s back story, choosing it intuitively and discovering it to be “fabulously interesting.” Because it’s based on two squares overlaid diagonally, it relates to the horizontal and vertical edges of the canvas as well as to the grid, a device used by the artist to “anchor herself” in the compositions. The size and shape of the stars dictate their distribution and spacing on the picture plane. There is an implied grid that secures the forms and is reiterated by the negative space. The stars are placed close enough together to reflect their similarities yet far enough apart to leave negative space with its own fields of painterly incident. This negative space, in turn, becomes a kind of Barbée or Maltese cross which further enfolds the stars into the composition. Bogat’s hedonistic side is revealed through the painterly techniques of staining, pouring, blotting, and a loose brushwork that delineates the forms in high-keyed hues. In “Ogdoadic 6” (2005), a quartet of vaporous pale yellow stars secure the quadrants of the canvas as they seem to hover above a closely-hued ground, creating a narrow spatial illusion in which the brushy base nearly embraces and obliterates the figures. At some points, blotted flecks of brilliant green seem to tether the forms to the surface, while, at others, they punctuate the composition as well as add another coloristic interval. “Ogdoadic 5” (2005) uses a similar palette but places the stars three by three. A higher visual contrast allows the shapes to be read more clearly on a field that shades from daffodil to teal and mauve, recalling a similar motif widely used by nineteenth-century quilt makers. 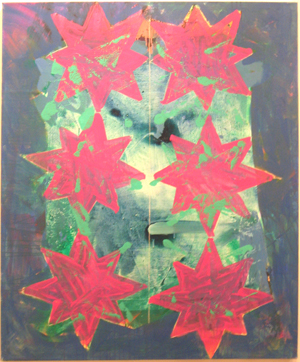 While disavowing any alliance with Surrealism or Dada, largely because of their preconceived orthodoxy and shock-filled agendas of blunt, anti-aesthetic confrontation, the paintings of Fausto Sevila do contain an imagistic vernacular that relies on juxtaposing symbols derived from his personal physiological environment and experiences. Though Sevila believes his sensibilities are closer to the poetry of Lorca or Machado than to any group of contemporary painters, his ideal might come closer to the Romantic individualism and struggle that typified the founders of Abstract Expressionism. Using a vocabulary of unique emblems and signs, which he cultivates and distills over time, Sevila builds up layers of encoded meanings and potential interpretations. These pictures function through a more purely pictorial sense than the material facture of paint and stroke that distinguished the Abstract-Expressionists. “I see my work as an antidote to the idea of instant gratification. I’m all about patience, the enforced slowing down of things, not just in how the images are perceived, but in the process as well,” Sevila noted

“3 People 7 Conversations” (2006), is a scene of people (perhaps the artist and his family) sitting in the front seat of a car, cropped by the edges of its window. Features are scrapped to a ghostly translucence and are overlaid with a web of images in light tones that complicate readings and echo the transparencies of David Salle or Francis Picabia.

According to Sevila, “Warhammer 4000” (2006) was inspired by going with his son to a game convention. Bits and pieces of this scene are graphically reduced, supplying the elements that the artist intuitively uses to structure his composition—a foreshortened table piled with toy tanks, sections of landscape, and various military apparatuses. A circle of twelve silhouetted blue shapes representing game pieces are laid out like the hours on a clock. Is this a countdown till the lessons learned through the “game” are put to use in the real world of warfare? Perhaps more benignly it’s merely the clock running out on childhood fantasies and pastimes.

Despite the constant carping and theorizing that tries to nail an epitaph on the practice of painting, the fact that two such diverse and apparently opposed directions as those of Bogat and Sevila can be accommodated within its practice, helps demonstrate its continuing vitality and breadth.

Susan Bernofsky’s Clairvoyant of the Small: The Life of Robert Walser

Clairvoyant of the Small: The Life of Robert Walser (Yale University Press, 2021) is an affectionate, precise piece of writing that illustrates a man of complexities both personal and professional. It is an intimate portrait of an artist, soul-crushing in its realism, with all its valor and rigor.