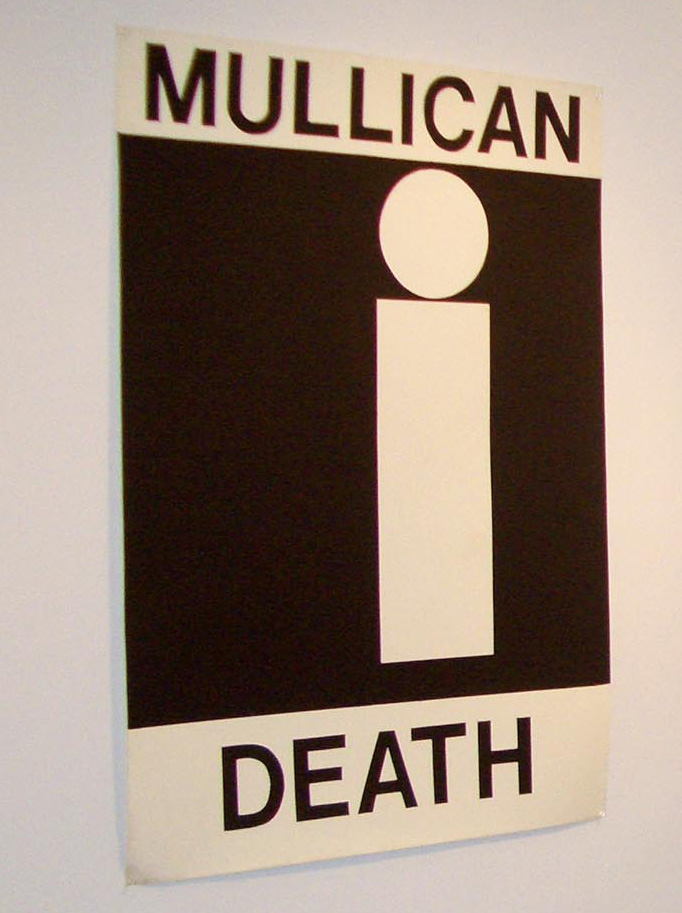 After a thirty-something-year career of relentless production, any exhibition of Matt Mullican’s work is going to have to severely abridge his story. Though compact, this well-chosen selection of work from the seventies and eighties is a handy primer in Classical Mullican that offers the viewer a chance to focus on discreet parts of a sometimes-overwhelming oeuvre.

Since the mid-seventies, Mullican has performed while under hypnosis, made huge banners, used charts and murals to depict a visually schematized private cosmology, and explored virtual reality with the aid of a supercomputer. But beneath the postmodernist multiplicity of his output one finds some classically modernist tropes: the artist as myth-maker, the disordering of the senses, and the exploration of the self. What unifies his divergent set of practices and products is a skewed but serious inquiry into how we give meaning to representations.

Made while Mullican was a student at Cal Arts in the seventies, the earliest pieces in the show have the studious look of ongoing research. Two large Homasote bulletin boards, to which are pinned notes, drawings and newspaper clippings, summarize the development of the artist’s thinking. His brainstorming often takes the form of list-making: of possible art objects (“buttons, badges, tabs, ribbons, emblems…”); types of music, (“music describing the ascension to heaven, music describing the vibes of the room you’re in”); and potential performances (“eating, standing in line, swimming…”). Reference photographs, such as a reprinted group portrait of a 19th-century amateur theater group or newspaper clippings of dead soldiers on a battlefield in Libya, suggest the broad range of themes Mullican would later explore in his mature work. 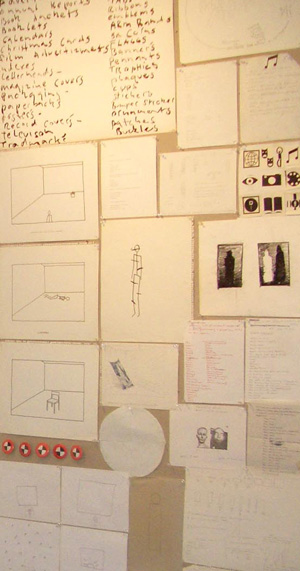 One of the boards features a series of crude ink drawings of a stick figure in a bare, perspectival room. It seems that Mullican spent enough time with this stick figure to name him Glen, as well as to execute experiments on him in drawing form. If you poked him, could Glen feel pain? Could Glen die? Most importantly, was there any meaning in asking those types of questions? Beneath their willful absurdity, Mullican’s stick figure investigations turned the inquiries of conceptual art, which had by that time fully dispatched with subjectivity and mimesis, back on the problem of representation. The question of the pain of a stick figure is, essentially, the question of how we look at pictures.

A critical turn occurred when Mullican began to systematize the results of his research into a graphic language—part international symbol, part high school play banner–that illustrated idiosyncratic terms from his emerging cosmology: life, death, the subjective, the world framed, heaven, and so on. Throughout the decade he refined and elaborated his sign system, presenting it in forms as disparate as the etched marble relief of intertwining glyphs or the computer-generated lightboxes in the gallery’s front room.

Mullican’s work in the eighties touches on various themes of the decade without fitting easily into any of its accepted categories. His employment of near-readymade forms—signs, banners, printed ephemera—coupled with the relatively hands-off look of his iconographic work puts him formally in a camp with artists like Haim Steinbach, Sherrie Levine and Allan McCollum. However, where those artists sought to check the ahistorical hubris of their neo-expressionist peers, voicing doubts about the capacity of art to represent the world, Mullican dived headlong into a project to systematically chart the meaning of the universe. It made Julian Schnabel seem a paragon of modesty.

One of the marks of the amateur cosmologist, from Judge Schreber to Matthew Barney, is that he always figures centrally in his scheme of the cosmos. One could say that a cosmology is an author-centric picture of the universe. Mullican is no exception. It’s no accident that above every term in his system, we find his name, like a qualifier: we have “MULLICAN / LIFE,” “MULLICAN / DEATH,” and, naturally, “MULLICAN / MULLICAN.” Mullican’s work is distinguished precisely by its reflexivity, which produces a blurring of categories and an intriguing short-circuit of criticality: Mullican is simultaneously a scientist and a subject in his own experiment, which is also a play and even a spiritual quest.